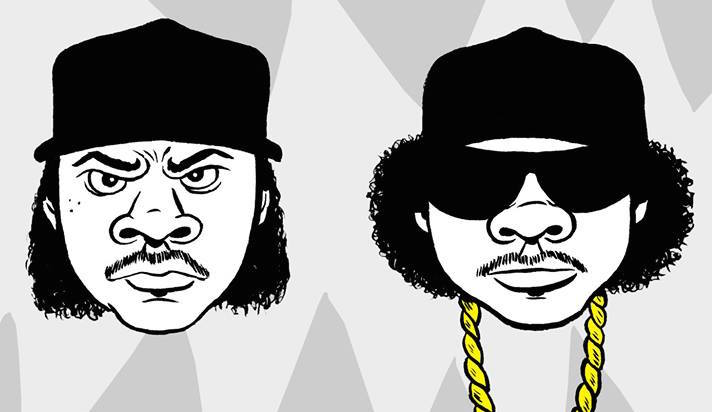 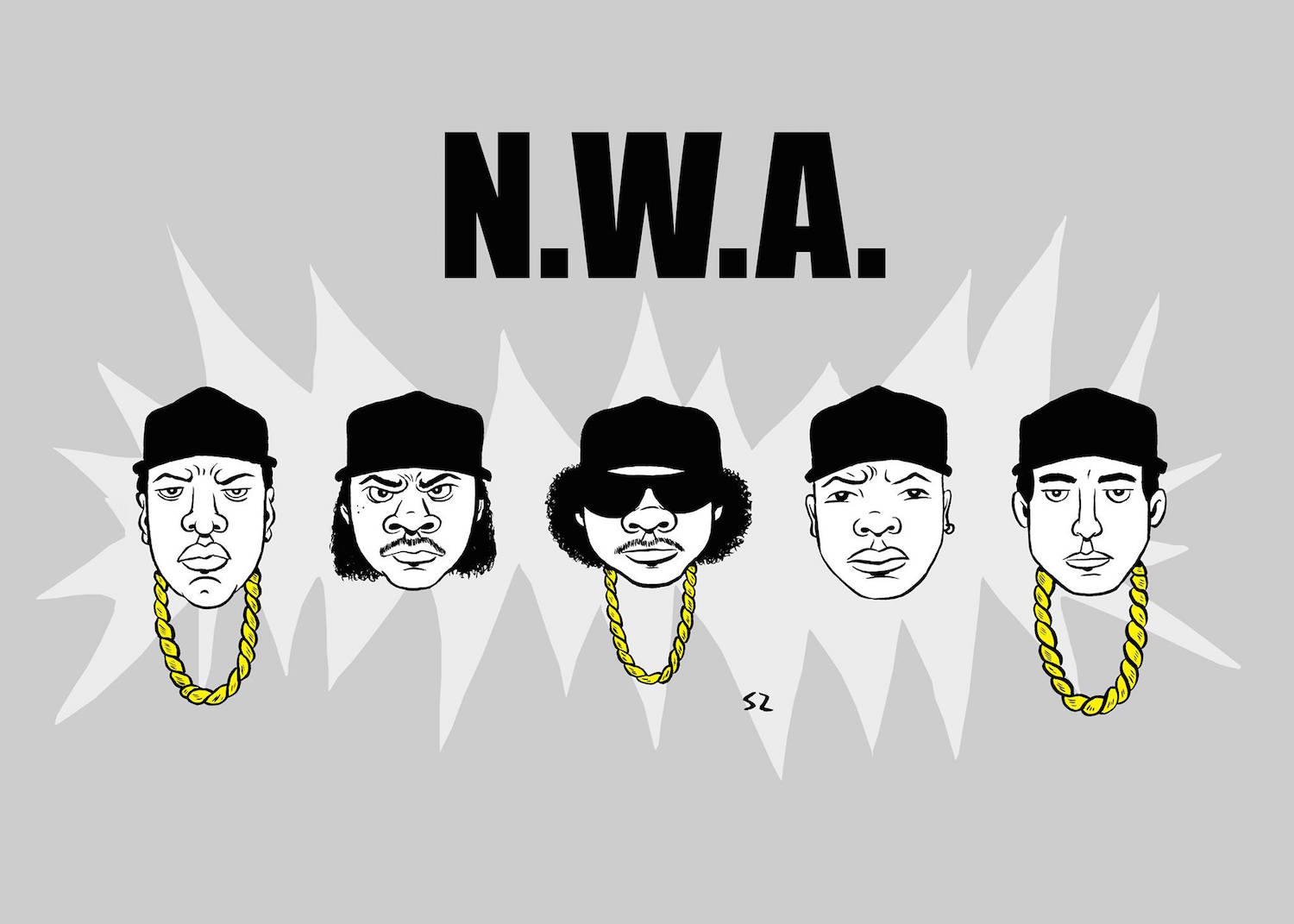 I don’t usually get personal in my movie reviews, but as this film is far from the typical movies we cover on this site, I’m going to digress a bit.  As someone who grew up in southern California in the late 80s and early 90s, rap and hip hop music was the soundtrack of my late childhood, I still remember sitting in the back of the bus and singing along to “Nuthing but a g Thang.”  On top of that, I have been enjoying F. Gary Gray films since his first full length feature, FRIDAY, and nearly all of his films are in my personal movie collection.  The combination of these two influences is too much for me to resist, so strap in as I nerd out over one of the most entertaining bio pics I’ve seen in years.

Bio pics are a difficult genre of film because there will always be someone who remembers events differently or will contradict the vision depicted on the screen, and this becomes all the more complicated the more principles you add to the mix.  Despite this mountainous obstacle, STRAIGHT OUTTA COMPTON delivers on all fronts, giving us a picture that captures the essence of the rise and fall of N.W.A., complete with all the heart, hate, and conflict that drove them from the streets of south central to the top of the record charts and onto your television screens.  The movie starts by examining the lives of the group’s members shortly before they get together.  Eazy-E is dealing, Dr Dre is a music obsessed DJ trying to find success in the midst of personal turmoil, and Ice Cube is a poet and rapper desperately looking for an audience.  While Dre and DJ Yella are spinning a gig at a local club, Dre has a chance encounter with Eazy and MC Ren and the wheels of fate are set in motion.  That club night ends with Dre getting arrested for punching a man who was assaulting his brother, and after Eazy bails him out he convinces him to bankroll a record with him.  The recording session gets off to a rocky start, but it eventually results in Eazy-E’s “Boyz-n-the-Hood” single, as well as the first collaborative effort by N.W.A.  The single’s popularity piques the interest of Jerry Heller, who convinces Eazy-E to take him on as the group’s manager.  The result of this collaboration will be a rocketship ride to fame, fortune, betrayals, and out of control events that are as much a reflection of the world the artists come from as their music is.

While STRAIGHT OUTTA COMPTON doesn’t have the big visual thrills of a typical summer blockbuster, it does boast some very compelling directing and cinematography.  F. Gary Gray (LAW ABIDING CITIZEN) masterfully elicits the anger and frustration that grows from being in a violent and repressed environment and repercussions there of.  The camera work is far from flashy, but it is masterfully done as the angles and framing add to the storytelling by subtly conveying the conflicts and relationships playing out in the scenes, I especially liked the sharp angles and tight shots that were often used in scenes of extreme conflict or violence as they evoked a sense of the power dynamics that were crescendoing at the time.

One of the most compelling features of Straight Outta Compton is the fantastic storytelling.  Given the fact that the film spans roughly 8 or 9 years and follows the lives of several individuals it would be impossible to cover all the events that occurred in a mere two and a half hours, instead it focuses on major events and significant encounters that molded the complicated relationships between the members of N.W.A. and the people who surrounded them.  From the second the movie starts you’re assaulted by the insanity of life in 1980’s south central LA, drugs, police raids, gangs, underage parents, and police harassment are just the tip of the iceberg.  This harsh and real opening goes on for a decent chunk of time, allowing the viewer to acclimate themselves to the reality these men faced, setting the basis for what is to come.  Every scene has a distinct purpose, from establishing the friendship and respect that was the basis for the start of N.W.A. or the juxtaposition of Eazy-E’s lavish new lifestyle while the rest of the band were still eating fast food, to the escalating actions of Suge Knight that eventually drove Dre away from Death Row records, everything is meticulously plotted out to create a gripping tapestry that captures your attention and won’t let it go

A compelling story won’t get you very far if you don’t have the talent to bring it to life, thankfully STRAIGHT OUTTA COMPTON boasts a truly outstanding ensemble cast.  Newcomer O’Shea Jackson Jr. takes on the part of Ice Cube, and it’s a role he was born to play since he is the rap legend’s first born son.  Jackson Jr. does a wonderful job of portraying Cube, easily mastering the hard edge his public persona is known for, but also showing us the man behind the bravado.  This may be his first film, but with the kind of performance he delivers I doubt it will be his last.  Stepping into the role of Dr Dre is Corey Hawkins (IRON MAN 3) and he delivers a very impressive performance.  Hawkins portrayal of Dre’s dedication and obsession with music is almost hypnotic, you can see the love on his face when he’s makin music and when he delivers his lines they feel like they are coming straight from his soul, giving us a scene stealing character portrayal.  I was also quite impressed by the chemistry Hawkins and Jackson Jr. had with each other, as the bond they show on the screen feels very real and heartfelt.  Jason Mitchell (CONTRABAND) takes on the role of Eazy-E, and he gives a surprisingly nuanced performance.  Eazy-E ‘s record label was named Ruthless and that is exactly how Mitchell play’s Eazy, as a man who is out for the money and will do what is necessary to get it.  However, he also shows the man behind the fame, who got his head mixed up by managers, lawyers, and other members of the music industry to the point that his friends were shocked by the way he was acting.  Mitchell takes all this and rolls it into his performance, giving us a great portrait of a man who achieved success, but wasn’t in a position to understand it, the inner conflict he exhibits as the film continues is harrowing and is the masterpiece of this excellent performance.  Neil Brown Jr. (FAST AND FURIOUS) and Aldis Hodge (A GOOD DAY TO DIE HARD) play Dj Yella and MC Ren respectively, and while they both deliver good performances, particularly Brown Jr with his portrayal of Yella’s playful nature, I wish their parts had been a bit bigger because they feel more like background players than full on participants in the film. Lastly, Paul Giamatti (THE AMAZING SPIDER-MAN 2) plays Jerry Heller, and he is perfect as the smarmy music manager.  Heller staked his claim with Eazy-E and undercut the other members of N.W.A., and Giamatti delivers this two faced performance perfectly, making him the loyal businessman when he’s around Eazy, and the shrewd, divide and conquering huckster when he’s around the other members of the group.

It’s not often that a bio pic comes along that successfully captures the essence of the time, events, and people that it covers, but STRAIGHT OUTTA COMPTON does just that.  Combining skilled visuals, excellent storytelling, and fantastic performances, it delivers a captivating narrative that will leave you wanting more.  If you are fan of any of the artists this film portrays, want to see some solid acting, or are merely curious about the rise of mainstream gangsta rap, then head on out to a theatre and give this movie a watch, you’ll be glad you did.