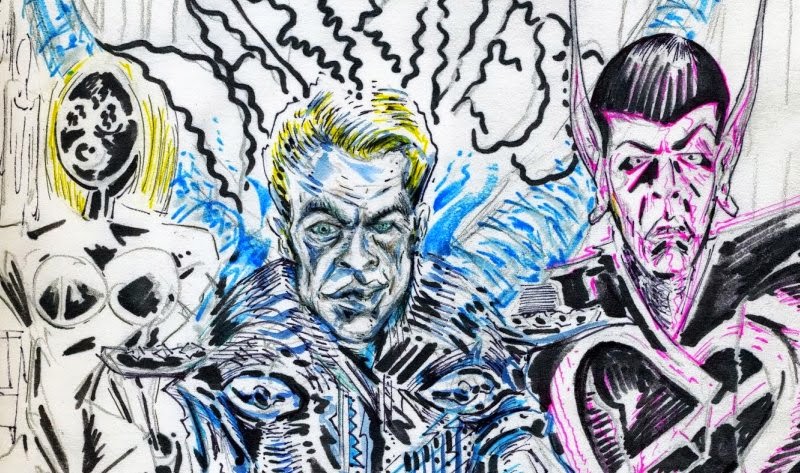 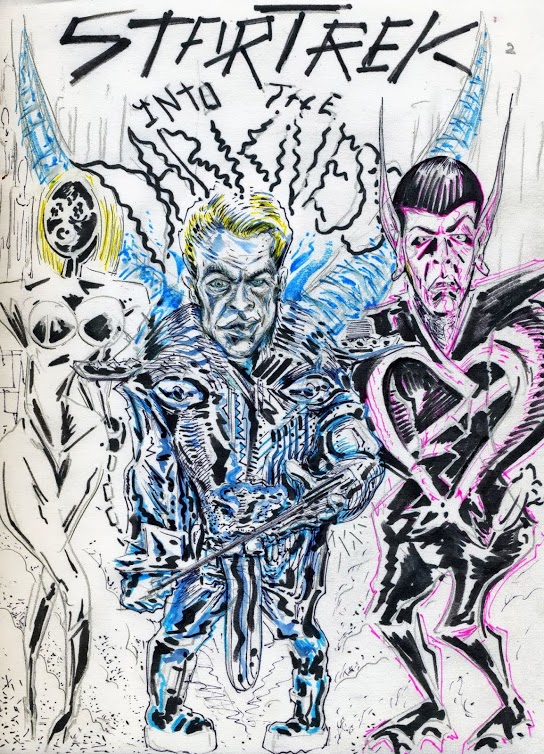 STAR TREK INTO DARKNESS, the highly-anticipated sequel to Director J.J. Abrams’ (SUPER 8) 2009 reboot of the beloved TREK franchise has finally arrived.  And Never Ending Radical Dude has presented me with a very daunting task: discuss what works and what doesn’t in a film whose plot and twists have been shrouded (for the most part, anyways) in mystery.  How can I, a writer for a site dedicated to celebrating/critiquing all things “nerdy,” not get excited in describing what I loved and not get intricate in my analysis of what didn’t work for me without delving into spoiler territory?  It’s a slippery slope to be sure, but much like the U.S.S. Enterprise’s intrepid crew, it’s my mission to “boldly go” where I have never gone before: as spoiler-free an account of my viewing of INTO DARKNESS as I can muster.  This may be more difficult than I previously thought…

Right off the bat, I have to say that the visuals in this movie are spectacular.  The colors are bright and vibrant when they need to be, the designs for both the scenery and the creatures are very eye-catching (I’m a big fan of the Klingon re-designs) and the wholesale destruction and scope of the action trumps its predecessor…and that film played host to the obliteration of a couple of planets!  And yes, for all of you out there who harp on Abrams’ fetish for lens flares, there is a fair share of the gimmick present, but it is in no way distracting from the plot.

I also appreciate that every member of the Enterprise’s main crew is given a moment to shine.  Chris Pine (THIS MEANS WAR) carries on in the iconic role of Captain James T. Kirk with the same bravado and charm that he demonstrated in the 2009 film.  However, he is a more seasoned officer and has fully embraced his role as a leader.  He is still impetuous and not willing to play by all of Starfleet’s rules, but he does so with the understanding that protecting his crew is his first and foremost responsibility.  A scene where he bargains for the safety of his officers shows how far the once-delinquent cadet has come.  Zachary Quinto (MARGIN CALL) continues to explore First Officer Spock’s intellectual/instinctual dynamic as he advises Kirk to go “by the books” and attempts to rationalize the need to suppress his emotions even further.  He explains it beautifully and you can tell when the inner turmoil is eating away at him.  And yes, Leonard Nimoy returns briefly as Spock Prime.  You have an experienced future version of yourself at your disposal.  How can you not exploit that in some way?  Logical. 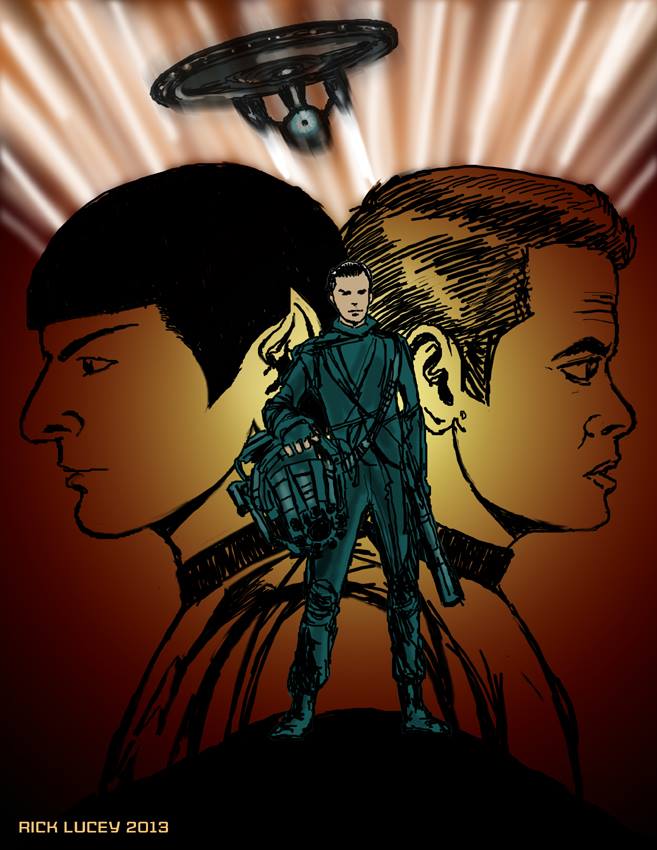 Zoe Saldana (AVATAR) is given a meatier role as Lt. Uhura as we get to see her put her resourcefulness and xeno-linguistic skills to good use in the field as well as explore her romantic relationship with Spock even further.  Karl Urban (DREDD) is still delightfully over-the-top as Dr. McCoy while also being given an opportunity to show off his infamous surgeon skills in a tense situation (but not as tense as performing a C-section on a Gorn and delivering octuplets, apparently).  John Cho (TOTAL RECALL) is given a chance to foreshadow Lt. Sulu’s future greatness as a captain in his own right when he is briefly given command of the Enterprise and delivers the mother of all ultimatums.  Anton Yelchin (FRIGHT NIGHT) is thrown into the deep end as Ensign Chekov and is tapped to fill the role of Chief Engineer following Montgomery “Scotty” Scott’s resignation.  Simon Pegg (MISSION IMPOSSIBLE: GHOST PROTOCOL) is still as funny as ever as Scotty, but is also given an integral part in the film’s main conflict that will get audiences cheering as much as laughing.  Bruce Greenwood (THE PLACE BEYOND THE PINES) returns briefly as Rear Admiral Christopher Pike to play mentor and friend to Kirk and you are completely invested in the fatherly role that is built on from the previous film.  New additions to the cast include Peter Weller (ROBOCOP, BATMAN: THE DARK KNIGHT RETURNS) with a very cold and calculating turn as Admiral Marcus and Alice Eve (MEN IN BLACK 3) as his daughter Carol who, as many fans of the original films know, is the mother of Kirk’s only son David.  Here though, she is only meeting Kirk for the first time, but there is definitely a few sparks that fly between the two.  Out of the main cast, I will admit that Eve is the weakest member.  She’s not terrible in the role, she’s just not given much of a story arc for us to develop as much investment as we did with the other characters.

And then there is Benedict Cumberbatch (SHERLOCK) as the film’s villain.  He’s first introduced to us as a rogue Starfleet operative named “John Harrison,” but soon the mystery surrounding his true identity is unraveled.  If you were a good fanboy like me and avoided all those nasty little Internet spoilers leading up to the release, then bravo!  But even so, a lot of us had a feeling deep down that we knew who this guy really was all along.  Nevertheless, Cumberbatch completely dominates this movie.  This is one guy who you seriously don’t want to be at odds with as Kirk and his crew soon discover.  He is like a coiled cobra, ready to strike at a moment’s notice, but is still ready and willing to sit patiently as opportunities present themselves for him to show you just how much of a badass he is.  And yet, he is not completely unsympathetic.  The reasoning behind his inclusion in the movie not only makes sense with regards to the new status quo of this alternate reality, but also provides him with a motivation that is not completely devoid of empathy.  In many ways, he’s been molded and manipulated to serve a darker agenda that has been put into play following the planet-shattering events of the previous film.  Yet another way for Abrams to remind you that while this is very similar to your beloved STAR TREK of old, there is a darker slant to events and settings this time around.  The fun adventure and exploration is still there, but you don’t come about it so innocently. 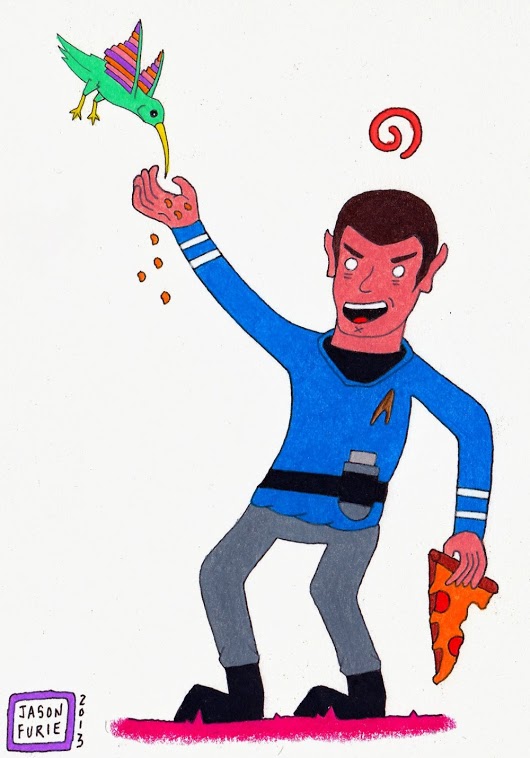 And that balance between maintaining reverence for what came before while adding a new twist on things is well maintained throughout INTO DARKNESS…for the most part.  After the revelation of Cumberbatch’s true self, there are several times where the film seems very heavy-handed in its references to previous installments.  The story is still fun and engaging, but eventually you do get a sense of deja vu with certain scenes and interactions.  One of the final dilemmas in the movie, for example, is pretty much a straight-up reenactment of a previous TREK film, just with some roles switched.  And Spock is given the job of delivering one of the series’ most epic line-readings in a moment of pure unadulterated pandering.  I got the emotional foundation for his reaction, but I just couldn’t help but laugh.  Of course, that is one of the drawbacks when it comes to a longstanding franchise with such iconic characters ingrained into Pop culture: every once in a while, you’re going to get a sense of “been there, done that” no matter how original you try to make your story.

But despite these moments of not-so-subtle winking to the audience, STAR TREK INTO DARKNESS is still a fun ride.  The grandeur of the story is on full display, the characters are as likable as ever and Benedict Cumberbatch’s villain is a welcome addition to this newly-revamped Final Frontier.  Does it feel like a retread of familiar territory?  Sometimes, but the magnitude and and spectacle of what is taking place on screen more than makes up for that.  At this point, the new TREK cast members have become worthy shepherds of their iconic roles and you can’t help but become invested in their continuing adventures.