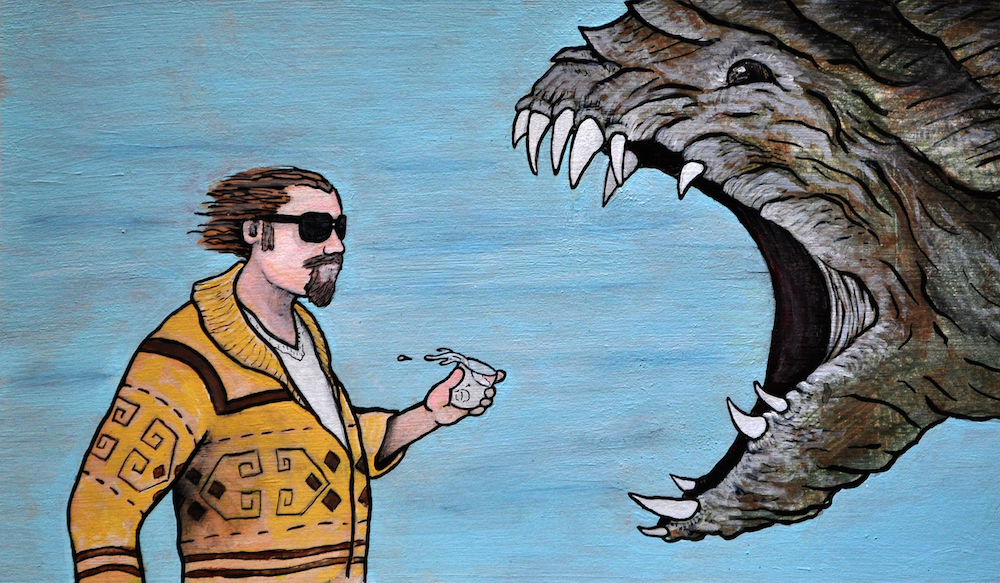 Wow.  That Exclusive NERD Artwork above sure looks spectacular, doesn’t it?

And there is my one compliment to the film SEVENTH SON: at least we have a stellar piece of art to accompany the review of this abysmal viewing experience.

I’m quickly forgetting anything and everything that happened in this movie.  Let’s see…Jeff Bridges is sleepwalking through the story as a Medieval demon fighter that sounds like a British Rooster Cogburn.  Okay…uh…Julianne Moore plays Maleficent from SLEEPING BEAUTY…or MALEFICENT.  Jon Snow is in the film for about 5 minutes before he is unceremoniously screwed over by yet another redhead.  There’s bland Seventh Son Guy who is Bridges’ apprentice and it’s important that he is the seventh son of the seventh son because…I don’t know, seventh sons are just magic and that’s common knowledge in this world so no need to explain it!  Something about a blood moon…a sidekick made up to look like a cross between Lou Ferrigno and one of the goblins from TROLL 2…

Honestly, it’s pretty pointless to try and explain the plot to you.  Just imagine any fantasy film involving witches out for revenge or an unsuspecting youth embarking on a magical adventure and not only will you have the template for the movie down cold, but chances are your story is far more interesting than anything going on in SEVENTH SON.  Chances are these actors would much rather be part of whatever twisted fantasy your mind just imagined instead of being stuck in goddamn SEVENTH SON.  It is depressing to watch folks of Bridges’ and Moore’s caliber just slum through this waste until the inevitable Oscar-prestige picture.  No one wants to be here and it shows.  The action is astonishingly dull, the effects are unbearably run-of-the-mill CGI and plot points seem to just pop in out of nowhere with no rhyme or reason.  Everything is executed with so much disinterest that I went from not giving a crap to angrily wanting the whole ordeal to be over with as quickly as possible.  About the only face palm-worthy moments in the film are when everyone continually and vehemently refers to Jeff Bridges’ character as a “spook.”  Uhhh…you may want to name your character something that hasn’t taken on many negative or derogatory connotations…just for future reference.

I loves me some stupid movies, I’ll admit.  But at least it seems like there is some sense of fun, misguided ambition or mind-blowing insanity to them.  There is none of that in SEVENTH SON.  It is cookie-cutter straight up with a phoned-in world mythology, one-note characters played by actors who look bored to tears, dull effects/action sequences and the same “the power is within you” lesson that every generic youth fantasy has.  I’m not saying every new genre film has to be groundbreaking.  Hell, be a train wreck for all I care.  But please…for the love of the seventh son of the seventh son (which again, is important for some reason)…at least be entertaining.

Check out my video log of SEVENTH SON, KINGSMAN: THE SECRET SERVICE and FIFTY SHADES OF GREY from McGTV: