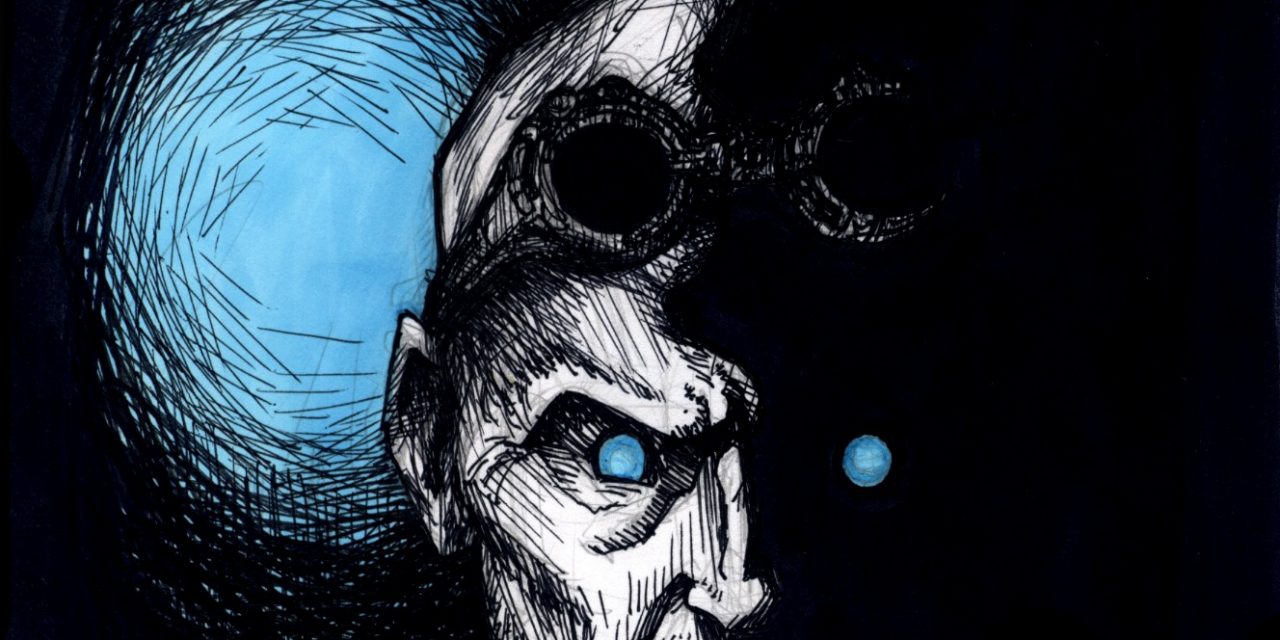 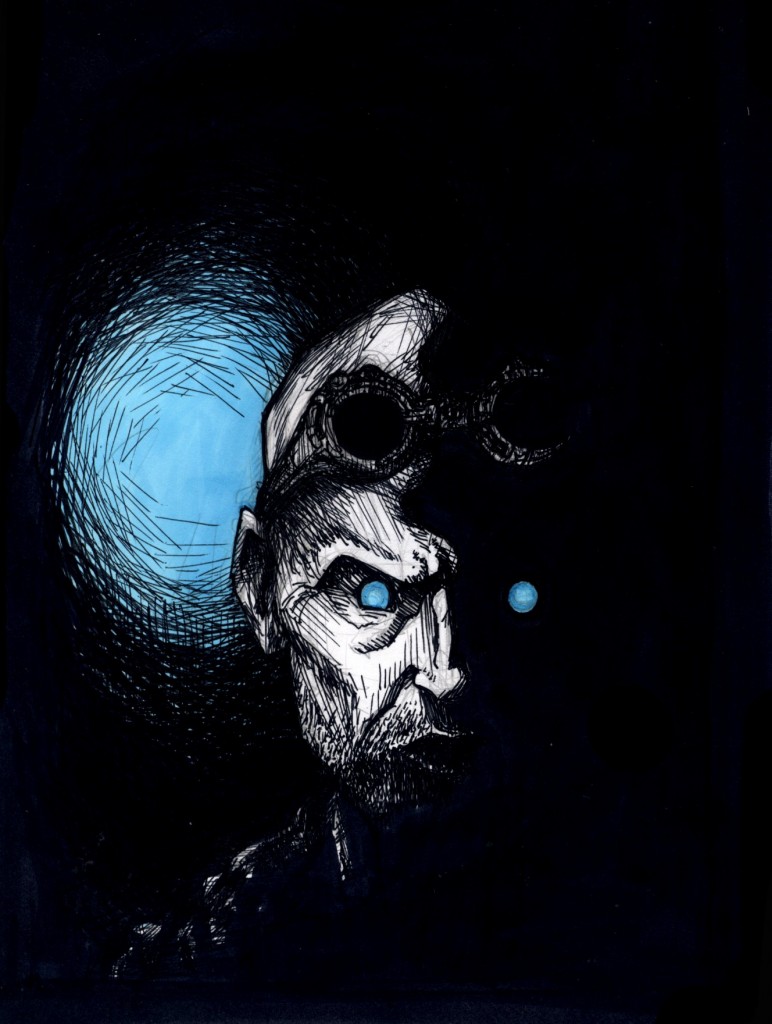 ‘I might have gone a different way.’ – Richard B. Riddick.

I’m just going to come right out and say that I loved CHRONICLES OF RIDDICK.  Of course I loved it. It’s an over the top space opera about an unstoppable space tough who kills people with a tea cup. You follow Riddick as he bad asses his way through constant attempts on his life and then as he quickly kills his way through an all powerful religious space army.  Plus, you get to watch Dame Judi Dench (SKYFALL) pay off some weird Hollywood debt as she plays an elemental spirit muse that helps Riddick fulfill his space destiny.  You got Karl Urban (DREDD) and Thandie Newtown (MISSION IMPOSSIBLE 2) playing out some sort of crazy galactic ‘David Lynch style’ Macbeth-ian story line. Inferno prison planets. Chameleon artichoke guard dogs. Knives that are ‘a half gram too heavy on the back end.’  All resulting in a King Conan type ending with Riddick sitting on the grand throne and ruling over an army of undead Necromongers. The problem is, where do you go after that?

CHRONICLES OF RIDDICK and PITCH BLACK are two very different movies. CHRONICLES is an intergalactic techno playground where Riddick gets to planet hop around and smear his grubby bloody hands all over your nice Sunday linens.  Each scene raises Riddick to a new level of madcappery and continually results in the elevation of his level of awesomeness.  He outruns a crashing spaceship and a rising sun.  He tames a wild space dog.  He defeats a villain that exist in varying degrees of space time. Riddick is unstoppable and at the end of the movie, is shown to be almost entirely unbeatable. PITCH BLACK, on the other hand, is a complicated study of human nature and delves subtly into our inherent psychological motivations and fears.

‘I truly don’t know what’s gonna happen when the lights go out, Carolyn, but I do know, once the dying starts, this little psycho fuck family of ours is gonna rip itself apart.’ – Richard B Riddick

PITCH BLACK dropped a small collection of people, all representing drastically different aspects of the human condition, onto a planet where monsters claw beneath the surface and only rise when darkness befalls the planet. When presented with the horror of their situation, characters were forced to either rise to the occasion or allow their true nature to take over. The religious man and his faith. The egocentric co-pilot who sacrificed half the ship to save her own ass. The honorable mercenary with the addiction problem who would willingly throw a little girl into the lions den if it meant his own survival. The convicted murderer who decided to go back.

‘Tell them Riddick’s dead. He died somewhere back on that planet.’ – Richard B. Riddick

What PITCH BLACK did was give us a glimpse of a complex universe full of space ships and monsters and to a character who was as bad ass as he was bald. We wanted to see more of this universe and we wanted to see more of Riddick fucking shit up in it.  After PITCH BLACK, the next natural progression in the story was to show Riddick in the large scheme of things.  The problem came at the end of CHRONICLES where there seemed to be no where else for him to go.  They tried to give us everything and ended the movie with Riddick having everything. The reluctant king of the universe. PITCH BLACK is complex and allegorical. CHRONICLES is mindless fun. PITCH BLACK changes Riddick.  CHRONICLES elevated him. RIDDICK tries to capture the best of both.

‘But most just flail around in the blackness searching for their destiny. The darkness, for me, is where I shine.’ – Richard B Riddick

RIDDICK clearly is an attempt to bring the character of Riddick, played by Vin Diesel (FAST AND FURIOUS 6), back to a more accessible and all too familiar story line.  After being (obviously) betrayed by his ‘death loving psychotic religious army of fanatics’, we find Riddick alone on another deserted desert planet full of monsters.  We find him alone on this planet for the first 35 minutes of the movie.  The start of the movie short of playfully pokes at itself and says ‘yeah, it made no sense for Riddick to become king of everything.  What the hell were we thinking? So, you guys cool if we just get back to basics?’

RIDDICK does a pretty good job of making Riddick scary again. Like watching a horror movie from the villain’s point of view.  He is unpredictable and seems to be everywhere. The mercenaries hunting him are terrified and are constantly losing their shit in Riddick’s presence. He is not to be underestimated.  But, he’s also extremely mortal. The movie starts with Riddick’s foot practically dangling off his leg.  Much like taking away Logan’s healing factor in WOLVERINE, RIDDICK tries to undo the idea that its main character is all powerful. He can be hurt.  He can be killed.  You should be worried about him. And, at times, you kind of are.  He has his back against the wall and you can see in his eyes that even he knows that he can’t smart talk his way out of this one.  But, it’s fucking Riddick. 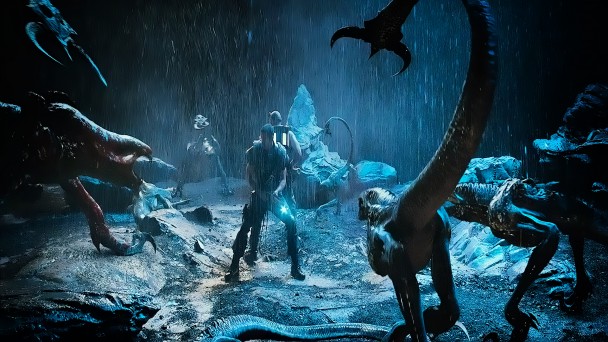 It’s clear the director, David Twohy and Vin Diesel love the character of Riddick.  I just would have liked to have seen him in a different situation other than on a planet fighting monsters in the dark and having to carry a power source right through the thick of em. We’ve seen that.  Throw Riddick in another prison and have him fight his way out.  Throw him onto a ship full of space zombies.  There are ways of bringing a character back from an over the top masterpiece like CHRONICLES.  But, you don’t have to constantly reboot him with the same story line. Regardless, Vin Diesel does an excellent job of playing Riddick as weak and desperate.  Despite all quips and actions pointing to the opposite.  Bautista made me really excited to see his portrayal of Drax in the GUARDIANS OF THE GALAXY MOVIE.  You get a nice surprise cameo from Karl Urban, reprising his role as Vaako. Despite constantly saying the opposite, Katie Sackhoff (BATTLESTAR GALATICA) plays tough so god damn well. (And.. I was kind of surprised to see her topless..) I was also surprised and slightly disappointed by her sex kitten transformation at the end of the movie.

‘And then, I’m going balls deep into Dahl.’ – Richard B Riddick

RIDDICK is fun. It’s creative. There’s really not a lot to complain about. The monster designs are pretty great.  The story is adequate. You’re constantly waiting for his pet coyote space dog to die. Riddick is scary.  He’s tough, but not too tough. The individual mercenaries are all interesting in their own right. Definitely check out this movie if you want to see what kind of shenanigans your ole pal Riddick is getting into.  And enjoy it, because, it’ll probably be the last time.

‘Had to end sometime. ‘- Richard B Riddick