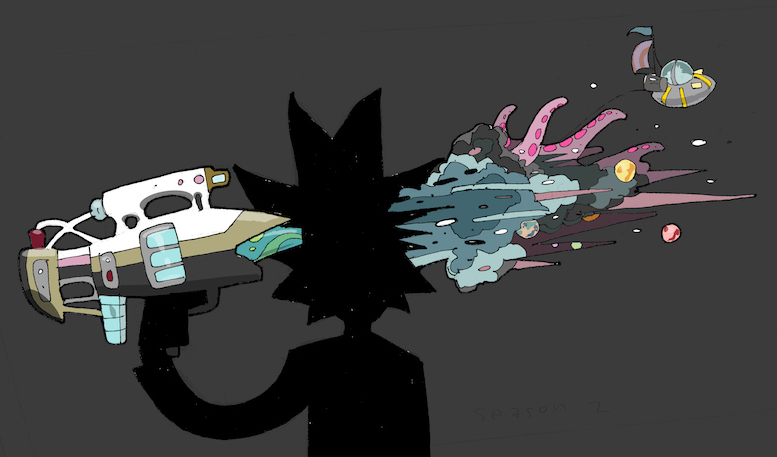 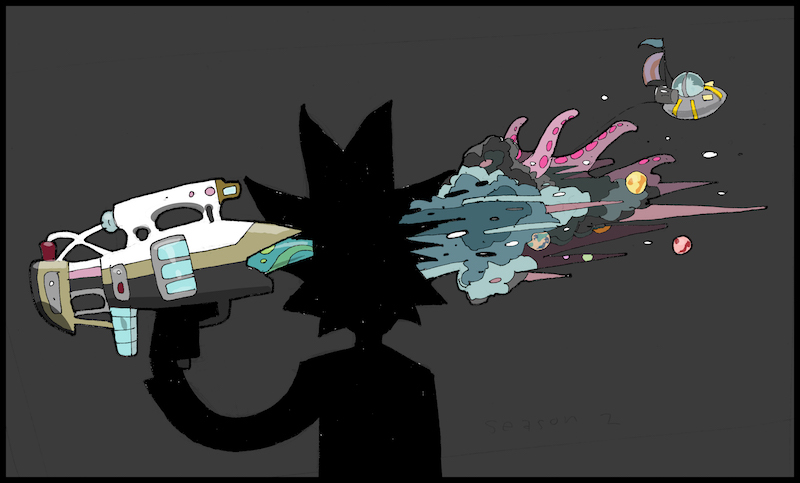 (In the honor of Rick Sanchez, I wrote this completely obliterated. -Mark Espinosa)

(Editor’s Note: In honor of writers writing drunk, I’m drunk, and not going to copyedit this post. -Jason Furie)

Has that episode even aired yet? Shit, man. I dill even know. I feel like I’ve been screaming “Pickle Rick” for weeks now. I feel like I dreamed it up. This is meant to be a season 2 review and If I learned one thing from season 2… It’s that you… Never.Go.Back.To.The.Carpet.Store. If that was an online post, I would have used those clapping hand emojis between each word. Also. Your vampire name has to be civilian. Mine would be… “Lestat-uesque” I guess that is more of a license plate and less of a name. Listen. I’m not going to blow smoke up your sweatpants and call it kiwi salsa. It’s been almost two years since the last episode of RICK AND MORTY. Should I count the April Fool’s drop of the season 3 premiere? Would you? Don’t even try and tell me how to write this article. Great.  Now I’m arguing with an imaginary.  Is this what you want? You want to see me dancing on a bar in a tiny red bow tie?  I bet that’s what you want, you sick bastard. “Wait for the ramp, Morty. They love the slow ramp.” They sure do.  And “face huggers.” Those little suckers go for a sweet nickle on the alien market. An alien culture, wrapped inside of an alien culture, wrapped in an alien culture. A Russian nesting universe.  It’s all about trying to keep Summer safe.  Shit, man.  Ain’t that the truth. Schrödinger’s cat. Never met em. Or did I? 2 years since the last season of RICK AND MORTY.  YOU’VE ALREADY SAID THAT. This ain’t no frozen timeline, son.  Let it go. This is real life. Unless, our  reality is some sort of MATRIX universe.  Of all the Keanu Reeves Universes to live in, I got stuck in the MATRIX one.  I would have settled for the JOHNNY MNEMONIC one. Dolphins crap where they sleep. You ever see CABIN ON THE LAKE? I feel like I should feel upset that Jerry and Beth are getting divorced. Life is hard. Dimension jumping… That’s the easy part.

We learned more about Rick’s backstory in season 2. Which is still not a lot at all. What did we learn? He’s a wanted criminal. (We already knew that.) Bird Person’s best day was on”Blood Ridge, on Glapflap’s third moon against the Gromflomites.” Bird Person is dead. Long live Phoenixperson. Shit. Tammy. Didn’t see that shit coming. I read somewhere that Tammy starts hanging around with Summer once she found out Rick was her grandfather. Although… If she was a galactic spy, She would only be at that high school cause they already knew Rick was her grandfather. Rick. Unity.  How much sex was in that episode? A lot. And with everyone. I assume that social constructs like love and orientation are needless complications that someone of Rick’s intellect wouldn’t waste his time on. If feels good. Go for it. “Take a shit on the floor.” I need to be careful about how I drop these quotes. Don’t want to come across like the “Red Grin Grumboldt” of trying to sound like I know what I’m talking about. It’s all about knowing you mean nothing and nothing matters.  Ah, Unity. She’s everywhere.  She’s everyone.  And she loves Rick. Loved Rick.  It wasn’t enough for him. Maybe he thinks he’s not enough for her? For happiness. Destructive tendencies to push away anyone who matters.  Like, Jerry. He’s useless. Rick is the patriarch now. Even though, he doesn’t want it. He wants easy. No hard work. Making a marriage work is hard work. Keeping a family together is hard work.  Jerry was useless.  The family is lost without Jerry. Whatever. “He’s Tiny Rick and he’s dying in a vat in the garage.” Whenever my partner quotes that line, they do it in a Bob Dylan voice. Or Ringo.  “So, get your shit together. All your shit.  Take it to the shit store and sell it.” We saw why Morty is more suited to roll with Rick on their adventures, than anyone else. We saw Rick sacrifice himself for Morty. Well… He accepted his fate once it was determined.  THERE IS NO GOD. The glow of these adventures have started to rotten for Morty.  Its something when a teenage kid would much rather sit in class, than save an alien planet from a gigantic space beetle.

Moral conundrums. That’s what this show does best.  That fine act of presenting a situation with extreme moral opposites and gyrating over the worst elements of each. The dark elements of doing the right thing. The dark elements of doing the right thing. The nothing that matters in the middle. It’s a sad state of affairs when your only means of identifying your loved ones is the ability to pull from a dark bank of terrible memories. That’s Eddie Murphy’s RAW. Not for content. But, name alone. Beth is so use to having a lifetime of horrible memories that she can’t believe a person would exist in her life with no bad memories. Damn. Knife in back. Table of two. Actually, Knife in gut, party of 5.  “Science, huh?  Ain’t it a thing?” Shit. I’m not even using the quotes right. Quotes right. What song am I thinking of? What can I say about Mr Poopy Butthole that hasn’t already been said? I can squanch with the best of em. Just don’t squanch alone. Squanch true. Squance right. Jerry is the exact opposite of Rick. I had a really deep thought and I got distracted by my cat.  Happiness. No one is truly happy.  Anyone without some form of depression is psychotic. In the FLASH, Barry Allen can time travel. Rick can jump realities.  He has infinite families. Everything becomes pointless, once you find out everything is pointless… Ever just stop and look at your hand.  Then look out the window. This is all real. This is all happening. That’s not the case for Rick. Morty is trying to stay grounded.  His dead body is in the backyard. Summer isn’t his real sister. What is real, even? She means the world to him.  He wants to protect her.  Isn’t that being a brother is all about? I think Rick is trying to keep Morty from becoming a dark Morty and is turning Morty dark. I would give my genitals to an intergalactic civil rights icon.  Of course I would.  Whatever replacement they give me would be dope.  ITS STILL THE COMMERCIAL! Still here.  Still selling fake door.

AND WHAT ABOUT MORTY. Poor little Morty. The thing I love about the VENTURE BROS is Dr Venture.  He went on adventures. Was kidnapped. Saw some crazy shit.  Now look at him? Broken. Poppin’ pills and skipping bills. What do you think a life like this would result in. A life full of Purges and Jellybean assaults. Having sex with a robot and watching your son fight his predisposition homicidal impulses. We watched Morty go dark this season. Like… PURGE dark. We are starting to see what Rick is doing to him. Or… Maybe Rick is trying to protect Morty from his true nature? An aspect of his personality that Rick has continually hinted about. What does Morty become?  Why did Rick return to his family? When left to his own devices, Morty will go off and build a direction for himself.  He will become the leader of the Tree People. He will give a wasteland bandit’s arm a second chance at revenge.  What happens to a prideful Morty? What happens to a prideful Water T? (I wrote ‘Walter T’ and forgot what I was referencing) They both fall from grace.  One of them found redemption.  For now. The End…?

I really hope this divorce is the kick to the butt Jerry needs to really get his life together.  I know the death of Sleepy Gary really hit him hard. His reaction to Summer visiting him, after her time in the wastelands, showed more growth than the entire last season. Okay.  I saw the Pickle Rick episode. I’m just taking my time with this article because I’m distracted by all kinds of shit. Pickle Rick was great. Of course it was. But.  The family at the therapist was better. This is going to be the darkest season.  Not because we are going to see some dark shit.  We’ve already seem some dark shit.  No.  It’s in them.  Everyone is heading down this path where they have to start acknowledging how broken they are.  That’s dark. That’s real. That’s ants in your eyes.

I guess a Post apocalyptic wasteland is a pretty great place to confront your feelings.  Its probably the one thing you can’t run away from. Maybe having your world taken over by an evil intergalactic federation isn’t the end of the world? Least they come with their owns pills. It’s all about turning ones into zeros. That escape was worth the wait. They never left the Shoney’s. Am I right? Sometimes you’re a prisoner.  Sometimes, you’re the prison.  We all have our moments of doubt.  We all escape from our feelings. Whether it’s at the bottom of a bottle or taking Roy out with no social security number.  In a galaxy full of distractions and inter-dimensional cable, you’re the only one who can hear yourself crying in space. Part 3:  The Reckoning. This may be the darkest timeline yet. Champagne wishes and Szechuan sauce dreams. I feel like I should have some final thoughts… I dunno. Life is hard. Knowledge is dangerous. I never want to go back to being ignorant about how horrible the world is. It makes every day harder knowing. Gaseous beings would gladly wipe us out if they could. Don’t even get me started on the “Gear Wars.”

“And that’s the way the news goes.”