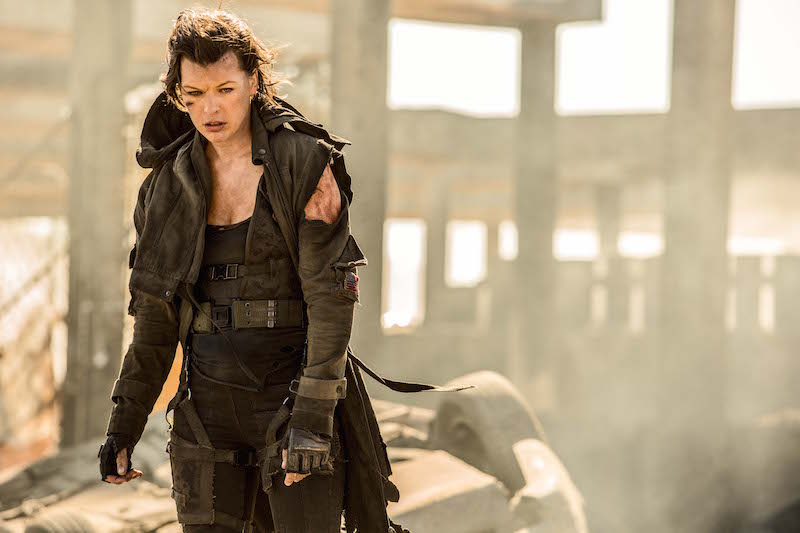 Okay.  Help me out with this.

Did Alice lose her super powers at the end of the last movie or the one before that? Did she ever get them back? I know that her army of clones were wiped out. Which, is a bummer. Where’s Michelle Rodriguez? Did she die in that huge underground city?  That was the last movie, right? I think a version of her lived? No. She died saving that kid. Who’s kid was that? I’ve seen all these movies so many times and now they are all splattered across my memory.  There was a boat that had a bunch of our heroes cryogenically frozen on it. Then, there was the movie that took place in a prison in the middle of a city. That’s where we meet Wentworth Miller. He ended up being the brother of a character we met in the 3rd movie? The girl that was in HEROES.  Which power did she have on that show? She was the one with multiple personalities.  Ali Larter!  I think she was Claire Redfield. That makes Wentworth Miller, Chris Redfield. What ever happened to that girl in the miniskirt in the second movie. Jill Valentine. Wait, I think she was in the last movie.  She was brainwashed. The same thing happened to Oded Fehr. I think there was a girl named “K-Mart?” Did Alice have her own daughter? I need to watch all of these movies again. YES. Sup, Bon Jovi!  Or is that Guns and Roses?  Gun N Roses.  Is there a character named Rose?

Well.  According to this trailer, Alice is still at it.  The world is still messed up beyond repair.  It’s been like that for 4 movies. The T Virus took care of that. WIPED OUT EVERYTHING. Maybe this will be the mission where Alice fixes everything?  No more apocalyptic wasteland full of monsters. Oh! I just remembered the final scene from the last movie!  The white house was surrounded by zombies and dragons!  Oh Boy!  I can’t remember who all those bad guys are in this new trailer.  The one at the end was the villain from the 3rd movie.  I’m pretty sure Alice killed him.  She kills everybody. Then, the other one with the glasses. Blah. This movie looks great!  I will never get tired of RESIDENT EVIL movies.  NEVER.  You hear me, world?  Aw. Oh.  This is the last one.  I just made myself sad.