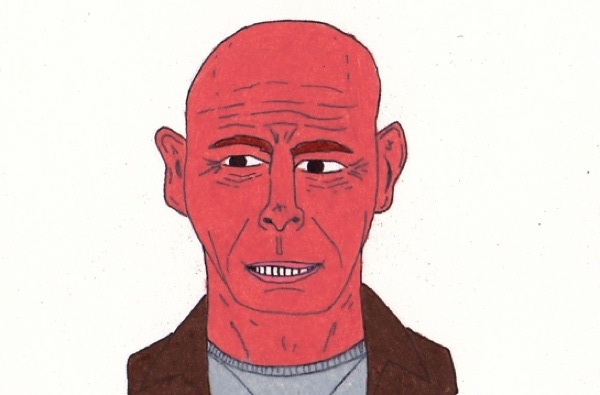 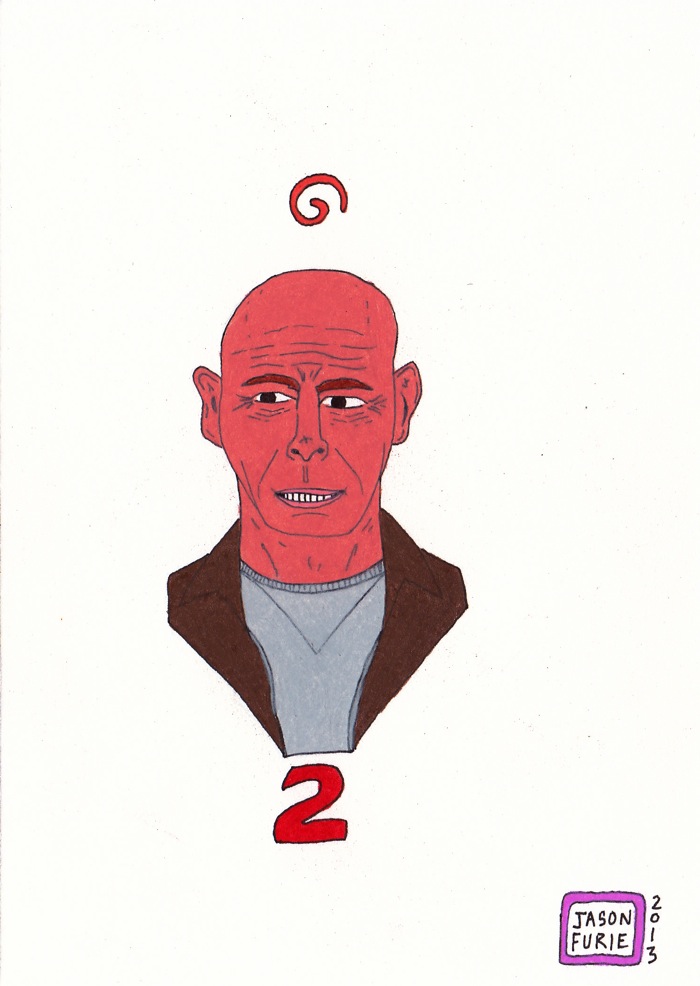 The tagline for RED 2’s promotional material reads “The Best Never Rest.”  Once again former CIA agent Frank Moses, his girlfriend Sarah Ross and his eccentric conspiracy theorist friend Marvin Boggs are thrown headlong into a super-spy adventure full of espionage, intrigue and Cold War secrets.  Based off of the Wildstorm/DC Comics series and following-up the story and characters established in the original 2010 film, RED 2 promises bold heroics and comedy gold…with all of it culminating in a “meh.”  While not a terrible film, this next installment in the RED franchise (there’s already talk of a third movie) doesn’t really offer anything new to make it take leaps and bounds beyond the spectacle of its predecessor, making the whole affair feel very by the numbers and leaving very little of an impression to get worked up about either way.

Set some months after the first film, Frank (Bruce Willis) and Sarah (Mary-Louise Parker) are trying to make an ordinary life for themselves when Marvin (John Malkovich) brings them tidings of not-so-great joy by telling them that the former operatives are marked for death due to their alleged involvement in a covert operation from the 70’s called Nightshade.  The trio is then forced to take matters into their own hands as they’re being pursued not just by a sadistic and crooked agent named Jack Horton (Neal McDonough, CAPTAIN AMERICA: THE FIRST AVENGER), but also a bitter contract killer named Han Jo-bae (Lee Byung-hun, G.I. JOE: RETALIATION) looking to settle a score with Frank and even their former MI6 ally Victoria (Helen Mirren) who has accepted the contract from a “strictly business” standpoint.  This results in a dangerous and wacky pursuit across Europe with our heroes coming face to face with other shady characters such as Frank’s ex-girlfriend/Russian secret agent Katya (Catherine Zeta-Jones), a French terrorist/wine enthusiast nicknamed “The Frog” (David Thewlis, HARRY POTTER AND THE DEATHLY HALLOWS) and an insane nuclear physicist Dr. Edward Bailey (Anthony Hopkins).  It soon becomes a race against time to discover the true nature of Nightshade and save the world along with their own necks.  Oh, and Frank and Sarah are having relationship troubles. 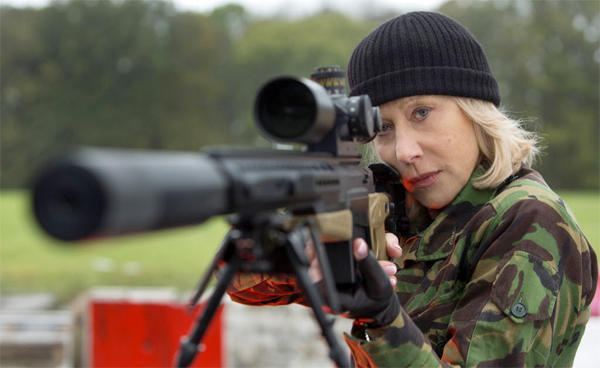 It sounds as though this set-up is rife for spectacular action and comedic interactions, right?  Eh…the action is pretty ho-hum and lacking in any real intensity and there’s a chuckle garnered here or there, but nothing too awesome to really stand out in the mind after the viewing.  Without a doubt, the best lines and moments are given to Malkovich as Marvin, the most neurotic of the group and yet still more on top of things than everyone else.  Helen Mirren is still very enjoyable as Victoria (we even get a few awkwardly humorous scenes with her Russian boyfriend played by Brian Cox).  Lee Byung-hun has a few bad-ass moments as Han as his martial arts sequences are the highlight with regards to visceral action.  Anthony Hopkins is so obviously more sinister than his character is initially letting on, but is still entertaining enough to watch.  There really is a Morgan Freeman-sized hole in the story (the character’s dead, so what are ya gonna do?) and Neal McDonough isn’t as compelling a pursuer as Karl Urban’s character from the first film, but does okay.  Other than that, the cast is fine…with the exception of leads Willis and Parker.

And this is in no way a knock against either actor.  I usually love Bruce Willis action fare and Mary-Louise Parker has always struck me as having a great talent for quirky comedic delivery as well as convincing dramatic turns.  But man are they irritating in RED 2!  I think I’ve figured out my primary issue with Willis: I find it kind of irritating when movies always try try to make him a combination of tough guy and priss.  In some outings, he strikes the balance well and it is done to good comedic effect.  But in films like this one and A GOOD DAY TO DIE HARD, his character comes off as an uber-whiner.  Frank goes into over-protective mode when it comes to Sarah joining in on the espionage and even verbally chastises Marvin for showing her some of the ropes…even when they’re already in the thick of it!  Not that it really matters since half of the problems that arise in the film are Sarah’s fault anyways.  I understand the need for quirky characters, but Parker really tested my patience in this installment.  She jumps in on car chases, interrogations and gunfights with little forethought purely because her character craves the excitement or because she’s trying to upstage Katya in a fit of jealousy.  She can’t even follow the simple instruction of not looking a mark they’re tailing directly in the eye.  That’s not funny, that’s just sad.  There is a semblance of growth for Sarah as the film progresses, but unfortunately her shenanigans tread dangerously close to Jar Jar territory. 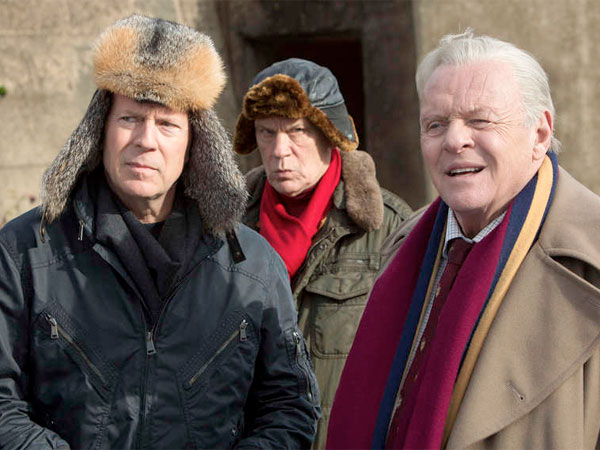 Ultimately though, the biggest drawback for RED 2 is that nothing really grabs hold in your memory in terms of plot, action or effects.  The story coasts on auto-pilot from start to finish, never trying to outshine the first film or shake things up.  Halfway through the movie, I completely forgot that uncovering Nightshade was still the main objective for our heroes.  The mission was simply lost amid all of Willis and Parker’s relationship spats and a rather lackluster car chase through the streets of Paris.  Character motivations and story arcs are so standard that you could probably recite them verbatim as they’re explained.  Katya, a character that Zeta-Jones looked like she was having a modicum of fun with, is unceremoniously dropped out of the movie without a second thought or later acknowledgement and I predicted Hopkins’ heel-turn within 5 seconds of him showing up on screen, the eventual betrayal is just that telegraphed.

But, despite these faults, I couldn’t bring myself to love or loathe RED 2 because…well, honestly because I couldn’t bring myself to love or loathe the first film.  I’ve never read the original comics and, overall, RED was just a dumb-yet-fun action-comedy to me.  It will never be one of those films that stays fixed in my memories, but I’m not worse off for having seen it.  And the same can be said for its sequel.  I suppose RED 2 comes off as a little more disappointing because this could have been the opportunity for the franchise to really “wow” me.  Instead, it plays it safe and tame with story and characters that could easily have been incorporated into any other noteworthy film series.  If you’re a diehard RED fan, it’s relatively harmless as a viewing though I’d recommend you save some money and wait for this rental.  Its shortcomings don’t make it unwatchable and nuggets of fun are sprinkled throughout, but effectively it won’t demand much of your attention and will fade out of memory as quickly as it arrived.  The best may never rest, but it certainly doesn’t stop them from phoning it in.