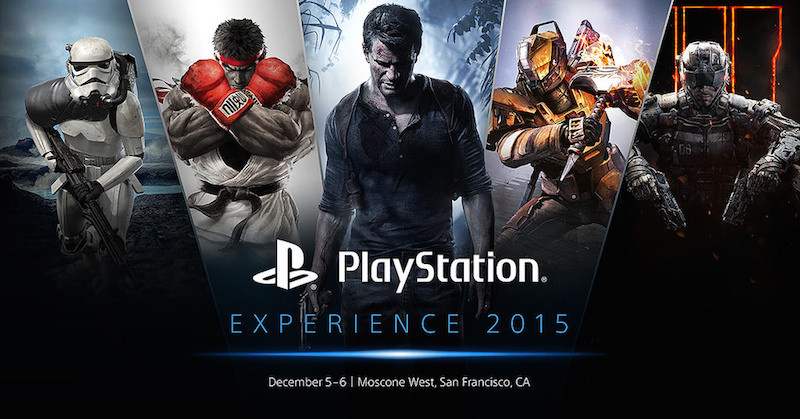 Yes I had to wake my groggy ass up super early after a long night of playing STAR WARS BATTLEFRONT in order to get in line for the biggest event at Sony’s PLAYSTATION EXPERIENCE 2015 event, the keynote presentation. This presentation is where all the biggest announcements and video game trailers are delivered to the public for the very first time. Of course you could watch it all online, but where else can you breath in all that glorious nerd BO so early in the morning!? So yeah, woke up to get in a line that started at 8am for the presentation at 10am. Sparring you all the details of how I got in, I made it to the presentation and it was pretty sweet.

Of course a cutscene video for the upcoming UNCHARTED 4 played right away to get the gears going. No gameplay was shown, but it was a pretty interesting video detailing a plot involving Nathan Drake’s older brother coming to visit. My take-away here was just how beautiful the facial animations were. Holy cow it was beautiful.

Then without wasting any time, Sony busts out a brand new trailer featuring gameplay for the upcoming FINAL FANTASY VII REMAKE game that is causing nerds across the globe to weep cotton candy sweet tears…I don’t even know what that means, but damn did the trailer look glorious. Never thought I would want to replay a game that took me 60+ hours, but I’m sold. It looks absolutely stunning. Check it out here.

Pretty sweet right!? Now that a room full of thousands of nerds are perspiring more than a damn street dog in heat, the energy levels are at an all-time high…and yes, I know dogs don’t sweat and stuff. For your sake I’ll just list a few of the key announcements that happened super quick after the FINAL FANTASY VII REMAKE video was shown.

-CALL OF DUTY BLACK OPS III is getting it’s first DLC Pack on PS4 30 days earlier than everyone else.

-BATTLEBORN looks super fun and we will get a BETA in early 2016.

-YAKUZA 5 will be coming stateside on PS3 (yes I said PS3) on December 8th and we will also be getting YAKUZA ZERO set in Tokyo 1998. Still no YAKUZA 1 and 2 HD set. Boohoo!

-The new remake of RATCHET AND CLANK looks absolutely gorgeous.

-The Playstation Virtual Reality headset was demoed, and while wonky as hell, it looks promising assuming the kinks get worked out a bit. The future is coming soon people.

-DESTINY is getting a fun looking Sparrow Racing event for a limited 3 week timeframe starting December 8th and it’s FREE for those who own THE TAKEN KING expansion. It looks so fun.

-NI NO KUNI 2: REVENANT KINGDOM is happening, they showed a trailer, and it looks beautiful. I’m so glad Level 5 is still behind the wheel. Sold.

For me, the biggest things were the FINAL FANTASY VII REMAKE trailer, The Sparrow races happening in DESTINY, the new RATCHET AND CLANK remake, and the NI NO KUNI sequel. While the presentation didn’t knock the wheels off my bike, it was solid as grandma’s stool after the holidays….again, it must be the fatigue and the nerd BO….I have no idea what I’m talking about.

If you want to see videos for each and every games shown at the keynote presentation, I highly recommend heading over to Sony’s PLAYSTATION Youtube channel HERE.

Stay tuned for more detailed breakdowns of the announcements and some gameplay impressions from the showroom floor!