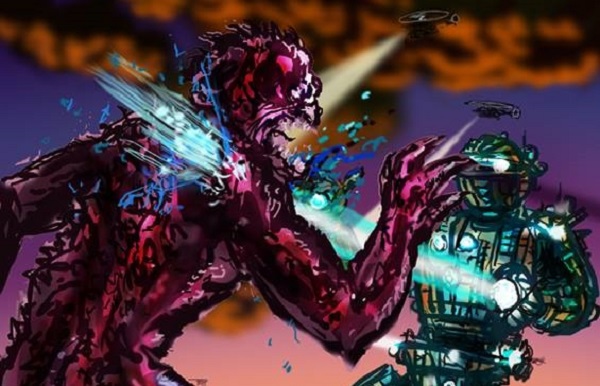 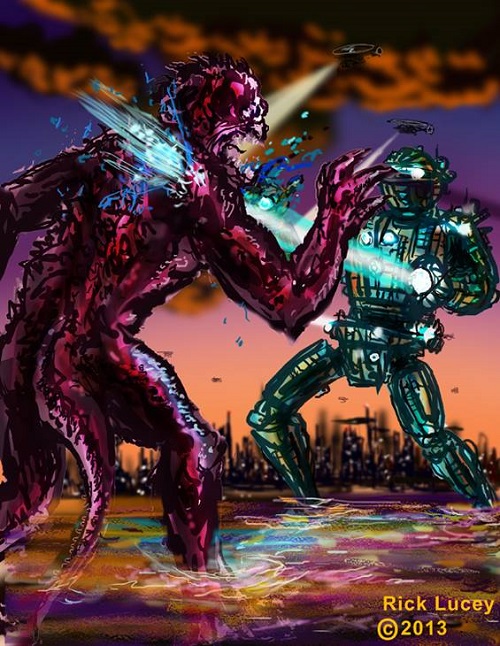 After a busy five years of writing and producing, Guillermo Del Toro (HELLBOY II: THE GOLDEN ARMY) returns to directing with PACIFIC RIM, an action/adventure monster movie that has all the trappings of a summer blockbuster. In the near future, behemoths called Kaiju are reaching Earth through a portal on the bottom of the Pacific Ocean and wrecking havoc and destruction wherever they go. In order to fight these monsters, the world unites to create Jaegers, massive humanoid mechs with dual pilots, that can go toe to toe with the Kaiju. As the war with the Kaiju drags on, the world governments start to lose confidence in the Jaeger program, so as the world creeps closer to destruction a group of Jaeger pilots are assembled to attempt a mission to the bottom of the Pacific Ocean to try and close the portal. While there is so much more to the story, it is too good to spoil, so I won’t go into any further detail here and will try not to spoil too much with the rest of the review.

As a long time Anime fan, I have longed for a big screen action film featuring mechs that was actually well done and, thanks to PACIFIC RIM, I can cross that off my wish list. Both the Jaegers and the Kaijus look amazing; they have a level of detail and realism that is beyond impressive, and when these behemoths go toe to toe, we get some of the coolest giant monster fight sequences ever put on film. While all the Kaijus are massive, they are all very different, from a brute who fights like a gorilla, to a lizard like one that shoots acid, they have varying appearances and abilities that keep them interesting. Likewise, the Jaegers come in a variety of styles and have diverse weaponry and fighting capabilities including plasma cannons, extra arms, brute strength, and heavy projectile payloads just to name a few. This variety on both sides keeps the clashing of these titans fresh and interesting throughout the film, since you’re never quite sure what ability they may surprise you with. I must tip my hat to Industrial Light and Magic, Legacy Effects, and the entire production staff for creating such wonderful giants and for making the entire film look so vivid and realistic. 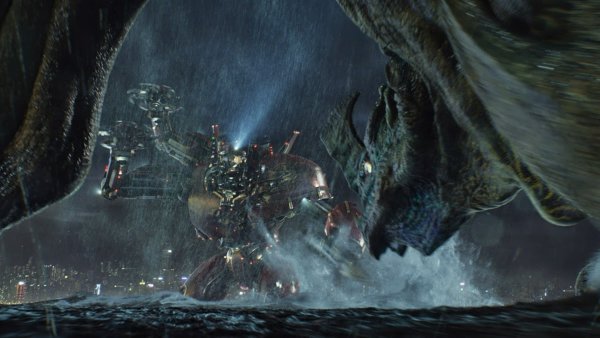 In addition to the fantastic creatures and fighting sequences, the entire production and story is top notch. There is not a single place in PACIFIC RIM that doesn’t look authentic: massive defensive walls and construction sites, enormous hangers for the Jaegers, buildings built of Kaiju bones, and military installations are all done up to make them beyond believable. I believe this is due in no small part to the wonderful talents of Del Toro. What makes Del Toro such a wonderful director isn’t the flashy camera work, which is impressive, but the way he uses the camera to tell the story. He seems to have sixth sense when he’s behind the camera because he effortlessly conveys emotions and attitudes through the lens, and while the actors’ performances certainly enhance the story, it often feels as if it isn’t inherently necessary. Coupled with this impressive directing is a great story. While Travis Beacham (CLASH OF THE TITANS) came up with the story, he co-wrote the screenplay with Del Toro, and the result is a summer blockbuster with a damn satisfying plot. All the major characters are well developed, with distinct motives that, when not initially apparent, are brought out as the story unfolds. Additionally, there’s an impressive subplot that is not only integral to the movie, but is also handled with as much care as the major storyline. I’m going to leave things ambiguous because I don’t want to ruin such a great story, but I would be surprised if anyone was disappointed with it. 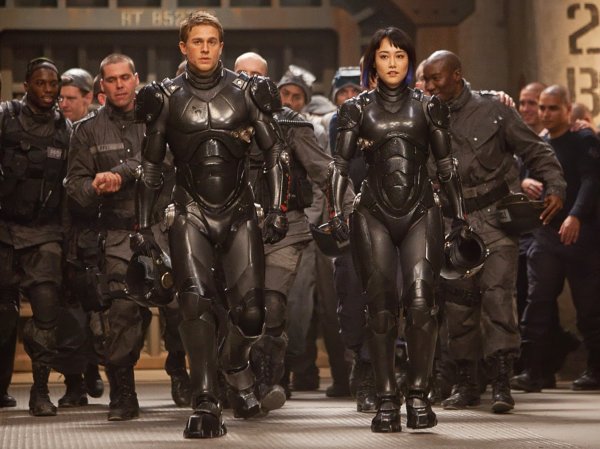 For a story to go from page to screen, it needs individuals to bring it to life, and PACIFICE RIM features a great group of actors who do just that. Charlie Hunnam (TV’s SONS OF ANARCHY) stars as Raleigh Becket, a former Jaeger pilot who is re-recruited for a daring final mission. I’ve been a fan of Hunnam since GREEN STREET HOOLIGANS and its fun to see him in a big budget blockbuster. His time on SOA has given him a confidence in his work, and that is perfect for the role of Raleigh, who he portrays as a man who knows his mind and abilities and isn’t afraid to use either. Rinko Kikuchi (NORWEGIAN WODD) plays Mako Mori, an aspiring Jaeger pilot with a haunted past. As Kikuchi has done mostly foreign work, I have only seen a few of her films, however, all of her work I have seen I thought was great and this performance is no exception. She handles Mako’s emotional confliction masterfully and she has great chemistry with Hunnam. Idris Elba (PROMETHEUS) fills the role of Stacker Pentecost, the military commander in charge of the Jaeger program. With his commanding voice and strong presence, Elba is a great fit for the role and definitely commands attention when he’s on screen. Charlie Day (TV’s ITS ALWAYS SUNNY IN PHILADELPHIA) steps into the role of Dr. Newton Geiszler, a Kaiju obsessed scientist who is trying to unravel the mysteries of their biology and psychology. Day’s quirkiness is perfect for this unconventional scientist and he brings this funny, obsessive man to life as only he possibly could. Burn Gorman (THE DARK KNIGHT RISES) plays Hermann Gottlieb, a high strung scientist who uses mathematics to predict the frequency and arrival time of Kaiju. While we don’t get to see as much of Gorman as we do Day, when they are on screen together it’s a recipe for hilarity, as Gottlieb’s seriousness clashes with Geiszler’s quirkiness. Gorman’s performance certainly leaves an impression, and I hope to see him in more prominent roles in the future. Clifton Collins Jr. (PARKER) plays Ops Tendo Choi, Pentecost’s head of operations. I’ve never seen Collins play a character I didn’t love, and even though he doesn’t have a large role here, he performs it perfectly. In my opinion, Collins is one of the most underrated actors working today and I don’t understand why he’s not cast more frequently and in bigger roles, because he is really a great actor. Ron Perlman (TV’s SONS OF ANARCHY) steps into the role of Hannibal Chau, a black market kingpin who specializes in Kaiju parts. While Chau doesn’t have that prominent a role in the story, Perlman skillfully brings this charismatic criminal to life and steals every scene he’s in. With so many great performances, PACIFIC RIM can truly be said to have an incredibly talented ensemble cast. 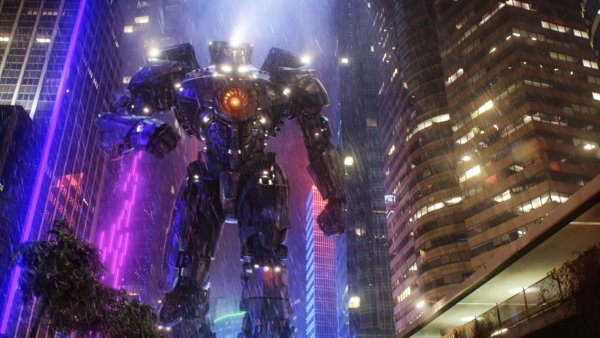 Whether you’re intrigued by mechs, excited about giant monsters, or are simply interested in summer blockbusters, PACIFIC RIM is the movie to watch. It has great action, a fantastic look, and a killer cast. For those of you who have been waiting to hear if this movie is really as good as the previews make it out to be, get off your ass and get to a theatre, because it’s even better.