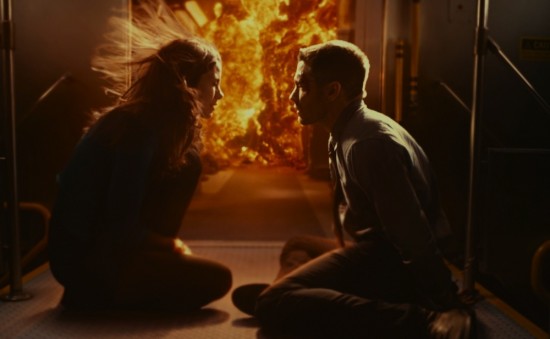 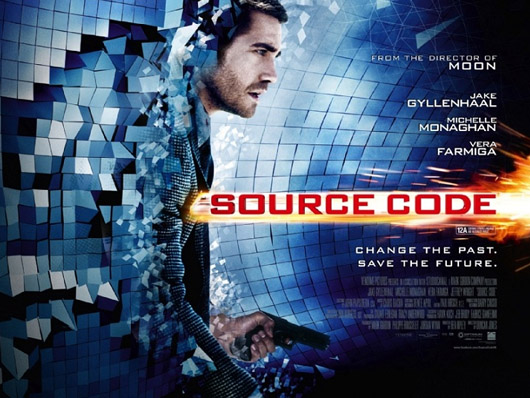 SOURCE CODE tells the story of a young soldier who wakes up in the body of someone else who is on a commuter train 8 minutes before it explodes in a ball of flames. He soon discovers he is in a program called the “Source Code” that allows one to relive the last 8 minutes of some one’s life and has been instructed to investigate who blew up the train by reliving those 8 minutes over and over. Each time he returns to the “Source Code” he must search out new clues and investigate different people to get to the bottom of the crime. Once those 8 minutes are up, he must report to his superiors through a monitor system set up in the capsule his body reverts to in our reality.

SOURCE CODE is the second film directed by newcomer Duncan Jones after his debut feature film MOON back in 2009. I consider MOON the best movie of 2009 by a long shot and it sits firmly in my top 10 movies of all time. I was eagerly awaiting the theatrical release of SOURCE CODE wondering if the directors sophomore effort would be as fantastic as his first. While I did not connect with this film as much as I did MOON, I am happy to report that what we have here is yet another classic science fiction film from a more than competent director with a clear vision and obvious passion for sci-fi. I am glad to see Jones contributing to the return of a more classic style of sci-fi that we have been seeing lately in movies such as MOON, SUNSHINE, THE TIME TRAVELER’S WIFE, and most recently, NEVER  LET ME GO. SOURCE CODE can be added to that list of fantastic films and audiences will be treated to another classic sci-fi tale that has a deep and entertaining story full of twists and turns, some interesting yet somewhat formulaic characters, and a controversial final act that will have any nerd worth his weight debating over the meaning for years to come. 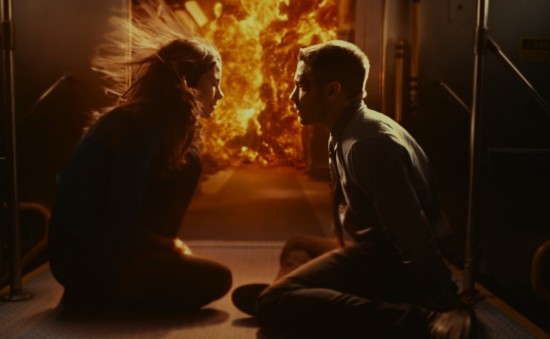 Jake Gyllenhaal (DONNIE DARKO, BROKEBACK MOUNTAIN) as our lead does a great job here as a man who is in quite the predicament. I enjoyed watching the evolution of this character as he encountered all of the twists and turns that were thrown at him. I never fully connected with him like I did with Sam Rockwell in MOON, but he did a fine job nevertheless. It was easy to put myself in his shoes and ask myself what I would do in his situation. The supporting cast was sufficient enough and includes Michelle Monaghan (MISSION IMPOSSIBLE 3, EAGLE EYE) as the cute love interest, Vera Farmiga (THE DEPARTED, UP IN THE AIR) as the woman on the monitor giving out orders, and Jeffrey Wright (QUANTUM OF SOLACE, SHAFT) as the creator of the “Source Code” and overseer of the project. All of the performances in this film are pretty conventional and my only real complaint is a lack of connection with any of them besides the lead.

I liked how the action began right away in this one and never let up until the credits rolled. There is very little set up and we are thrown into the movie much like the main character is thrown into his assignment. This lack of clarity from the beginning really grabbed my attention and had me asking questions right away. The movie definitely get points for not only grabbing my attention but holding onto it throughout the entire film. The pacing was spot on and it was quite the fun ride. I could not help but think of the 80’s TV series QUANTUM LEAP while watching this film and that’s a good thing for sure because that is arguably one of my favorite shows of all time. 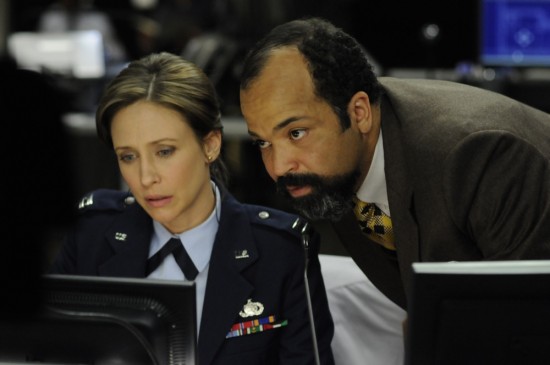 SOURCE CODE is one of those movies that is hard to review without spoiling anything since there are so many surprises. I had a great time with this movie and my enthusiasm for Duncan Jones as a sci-fi director is only building now that he has two solid films under his belt. This film moves fast and never skips a beat, it has some great ideas and plot twists, and truly has one of those endings that will have people talking and interpreting for some time. I say if you like a good sci-fi story with some substance and have been thirsting for something fresh in the genre, give this one a shot for sure.