Movie Review – PIRATES OF THE CARIBBEAN: ON STRANGER TIDES 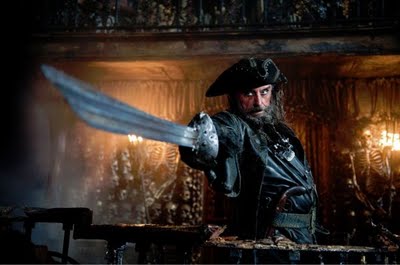 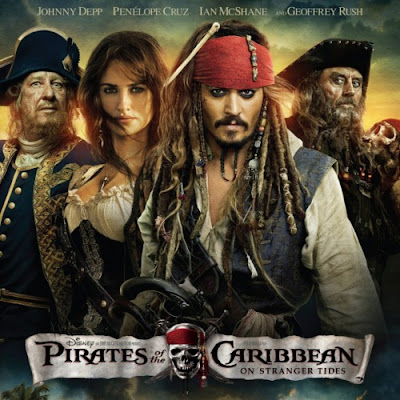 Just when you thought the “Pirates” franchise had sunk, Disney has decided to lift the anchor and set sail one more time with a fourth entry in an obvious attempt to rejuvenate this dying franchise. PIRATES OF THE CARIBBEAN: ON STRANGER TIDES is directed by Pirates newcomer Rob Marshall (CHICAGO, NINE) and once again stars Johnny Depp as every ones favorite pirate Captain Jack Sparrow. Some familiar faces show up along with the first appearance by the iconic Captain Blackbeard while Jack embarks on a quest to discover the legendary “Fountain of Youth”. This fourth installment is not really all that good OR bad, it just kind of exists. While I enjoyed the first Pirates adventure, and had some fun with the second and third, I really was kind of bored this time around and hoped for a bit more than what we ended up getting.

Johnny Depp returning as the famous Captain Jack Sparrow is something that should excite my inner nerd, but I have to admit that I don’t really care. Depp seems to be playing this character on autopilot, and while he does have a few borderline amusing moments in this film, I never reached a point where I was glad to see the character again. It’s not that he is bad, it’s just that I feel like I’ve been there and done that already. I was glad to see the return of Geoffrey Rush (QUILLS, MYSTERY MEN) as Captain Barbossa who has always been a “scene stealer” in these films to me. While he is not in top form here, his addition is more than welcome and seeing him wobble around on his newly acquired peg leg was a treat. When I first heard that Ian McShane (DEADWOOD, HOT ROD) was going to play Blackbeard I was overly excited because it was an absolute perfect casting decision. However, his portrayal lacks any real intensity or threat that the iconic character is known for and deserves. So while he looks the part, he just does not pose as big a threat as he could have. The only other notable addition is Penelope Cruz (VANILLA SKY, BLOW) who portrays the daughter of Blackbeard and is a past love interest to Mr. Sparrow. Her character is a welcome addition, yet everything she did in this movie is quite forgettable. 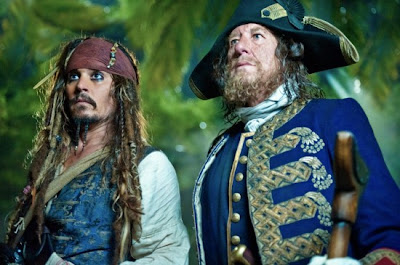 One of my main complaints with the last Pirates adventure was the completely confusing and convoluted plot that never really grabbed my full attention. I will say that ON STRANGER TIDES does a great job of grounding the characters and the story reminding me of what I liked about the first Pirates movie back in 2003. The characters motives are much clearer this time around and it is fun to see who double crosses who next and how. This adventure is definitely much easier to follow than the last one and keeps a consistent, if not dull, pace. I just wish the elements that should have been more epic, such as Blackbeard and The Fountain of Youth, were played up more.

If there is one thing I want out of a good Pirates movie it is some awesome high seas action! Even though there are seemingly a lot of fantastical things going on in this film, it never really felt magical or awe inspiring. Seeing how this movies budget was a Bazillion dollars, I felt as if we were ripped off somehow. Yes there are mermaids, zombies, cursed pirates, and beautiful sprawling landscapes, but none of those seemingly cool elements were done all that well. I will admit the mermaid stuff was cooler than expected but it all lasted but a few minutes of the films long ass run time. The zombies were extremely dull and could have been much much cooler. And the sword fights and chases seemed like a chore. In every Pirates movie before this there was always one outstanding element like the undead pirates of the first, the kraken in the second, and the epic sword fights of the third. This fourth installment really has no one really cool element. The only thing that would come even close is in the final, yet all too brief, final showdown at the Fountain of Youth. And NO that is not a spoiler because you knew they would find the Fountain of Youth just as much as you knew the Titanic would sink. 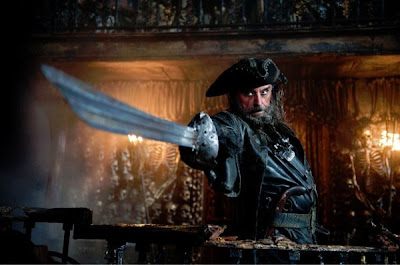 So all in all was it worth it to revisit Captain Jack Sparrow as he embarked on this new quest? In short, not really. Like I said before, this in NOT a bad movie, it’s just not a real good one either. If you are a die hard fan of this series than I believe you will enjoy it a bit more than I did but some disappointment is inevitable. The cast can be fun but is mostly dull (especially the forced love story between some missionary and a random mermaid), the landscapes are sometimes fun to look at yet underwhelming, and the action is a big let down for me besides some cool stuff with the mermaids and the final showdown. I really wanted to like ON STRANGER TIDES and hoped it would reinvigorate the franchise. Instead we have an unnecessary sequel to a franchise that just does not get the nerd in me all that excited anymore.