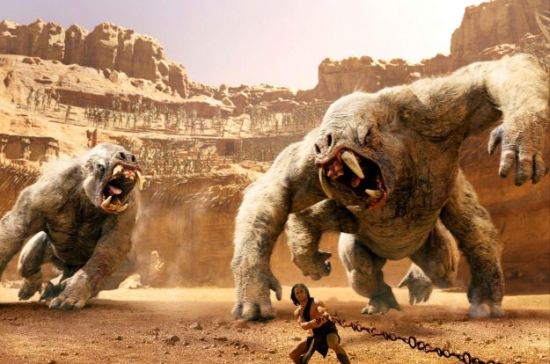 Disney’s JOHN CARTER is an adaptation of the Edgar Rice Burroughs novel A Princess of Mars that was written almost 100 years ago and serves as an inspiration to many beloved science fiction franchises. It tells the tale of a Civil War veteran named John Carter who unexpectedly gets transported to the Planet Mars where there are warring cultures battling for power. Carter gets mixed up in the whole mess and must decide whether or not he wants to find a way home or fight. This is pretty fun and classic science fiction stuff here people. It amazes me that we have not seen a big budget adaptation based on this franchise yet, but it does not surprise me that we are getting this film now considering the success of films such as AVATAR and the freshly rebooted STAR TREK.

This is director Andrew Stanton’s (WALL-E, FINDING NEMO) live-action directorial debut and the film stars a very likable Taylor Kitsch (FRIDAY NIGHT LIGHTS, X-MEN ORIGINS: WOLVERINE) who can also be seen in this summer’s BATTLESHIP. Over the past few months my anticipation for JOHN CARTER grew to large heights, and while I am not completely in love with this film, I can safely say that this is a wonderful science fiction film full of great characters and creatures, beautiful locations, and some pretty awesome action sequences. JOHN CARTER is definitely better than you think it is and deserves your attention. 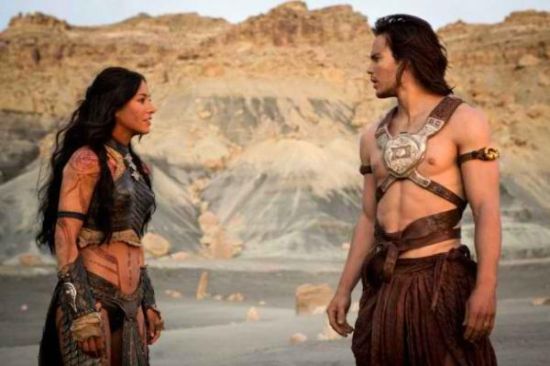 Taylor Kitsch stars as John Carter and he proves to be leading man material. His stint in X-MEN ORIGINS: WOLVERINE as Gambit lead me to believe he was a crap head and I did not want anything to do with him. His performance here more than makes up for that mistake and I will look forward to his screen presence in BATTLESHIP later this year. He is charismatic, likable, and often bad ass. I really had no complaints from his performance and while they were few and far between, we do get a few moments with this character that are actually pretty emotional. Something I did not expect.

Besides Kitsch as Carter, we have an amazing supporting cast that includes Lynn Collins (also in the craptacular X-MEN ORIGINS: WOLVERINE) as the princess Dejah Thoris who is not afraid to fight, the always awesome Mark Strong (SHERLOCK HOLMES) as the menacing Matai Shang who possesses supernatural abilities, Ciaran Hinds (HBO’s ROME) as Tardos Mors the brave ruler of Helium (a human city on Mars), James Purefoy (also on HBO’s ROME) as Mors’ right hand man, and Dominic West (300) as the traitorous human Sab Than. We are even treated to a small bit roll by Bryan Cranston (BREAKING BAD) as a fellow officer during Carter’s time on Earth. Cool! Beside those humanoids, there are a handful of great motion capture actors that portray various aliens including Willem Dafoe (SPIDER-MAN) as the green skinned ally Tars Tarkas. I know I’m naming a lot of names here, and my main point is to express how many wonderful talents we have on screen together. They all do a great job portraying their characters and are all a joy to watch interact on screen. While some of the character chemistry could have been better, there was never a point where I thought anyone was cheesy or over dramatic. Great job on all accounts. 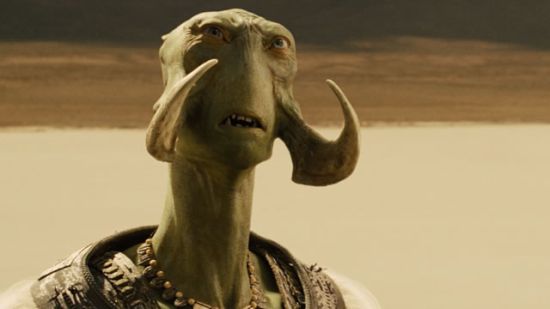 While the story is fun and the characters are spot on, I did not buy a JOHN CARTER ticket for these things. I bought a ticket to see sweet creatures, cool science fiction locals, and some bad ass action. Did I get what I wanted? In short, yes. In long, yesssssssss. Considering John Carter is brought to us by Disney and holds a PG-13 rating, I found it to be a pleasant surprise at how violent and mature this film ended up being. Sure my inner nerd has grown up a bit and thirsts for more visceral violence than what we got, but what we did get sure was fun. I especially enjoyed the area battle sequences that reminded me a great deal of what we saw in STAR WARS EPISODE II: ATTACK OF THE CLONES. There was also a fantastic scene where Carter took on a whole army by himself that was surprisingly emotional and powerful. Great stuff.

I should also take a moment to explain how cool the creature designs and locations were in JOHN CARTER. This film boasts a budget of over $250 million dollars and it shows. The creature effects are stunning and some of the panoramic views we get of sprawling cities and wildlife are a sight to behold. The green four-armed aliens called “Tharks”are so cool and lifelike.  They are really brought to life here thanks to the wonderful art design and talented motion capture performances. The beasts found throughout are all interesting and I especially enjoyed the lumbering white ape creatures found in the arena. On top of that, there are some great vehicle designs and city landscapes to enjoy. Make no mistake, JOHN CARTER is pure eye candy in almost every frame. I constantly marveled at the art design this film had and appreciate all the time and effort it must have taken to bring this all to fruition. Sometimes in our media saturated culture we become jaded because we have images and sounds thrown at us left and right. JOHN CARTER is a great opportunity to just stop for a minute and realize how far we have come with digital special effects. The stuff on screen here is so bizarre and far out yet it look seamless. We live in a wonderful time to tell stories. 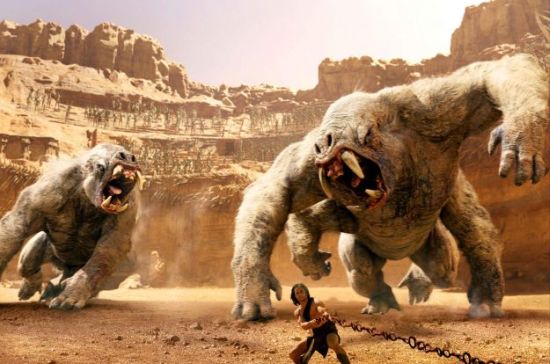 So I may have set my expectations really high for this one and let the “hype” my inner nerd built up get to me a little bit. Even still, I left the theatre satisfied so that should say something about my overall enjoyment. My main fear going into this was that is was going to be full of cheese. That is not the case at all and I was actually left with a handful of unexpected emotional moments. I came for the creature effects, cool locations, and action. Not only did I get all that, but I also got a cool classic science fiction tale with a wide assortment of awesome characters and performances. JOHN CARTER should not be missed in theaters. If you are one of the millions of people in the world who chose to see THE LORAX instead of JOHN CARTER, you should be deeply ashamed of yourself.