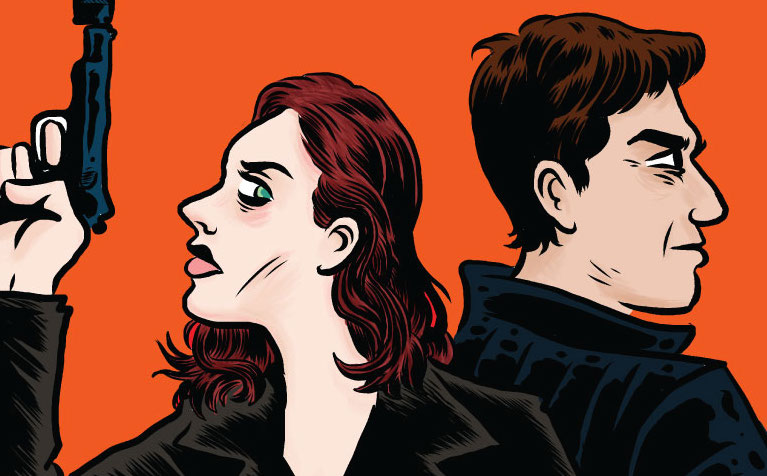 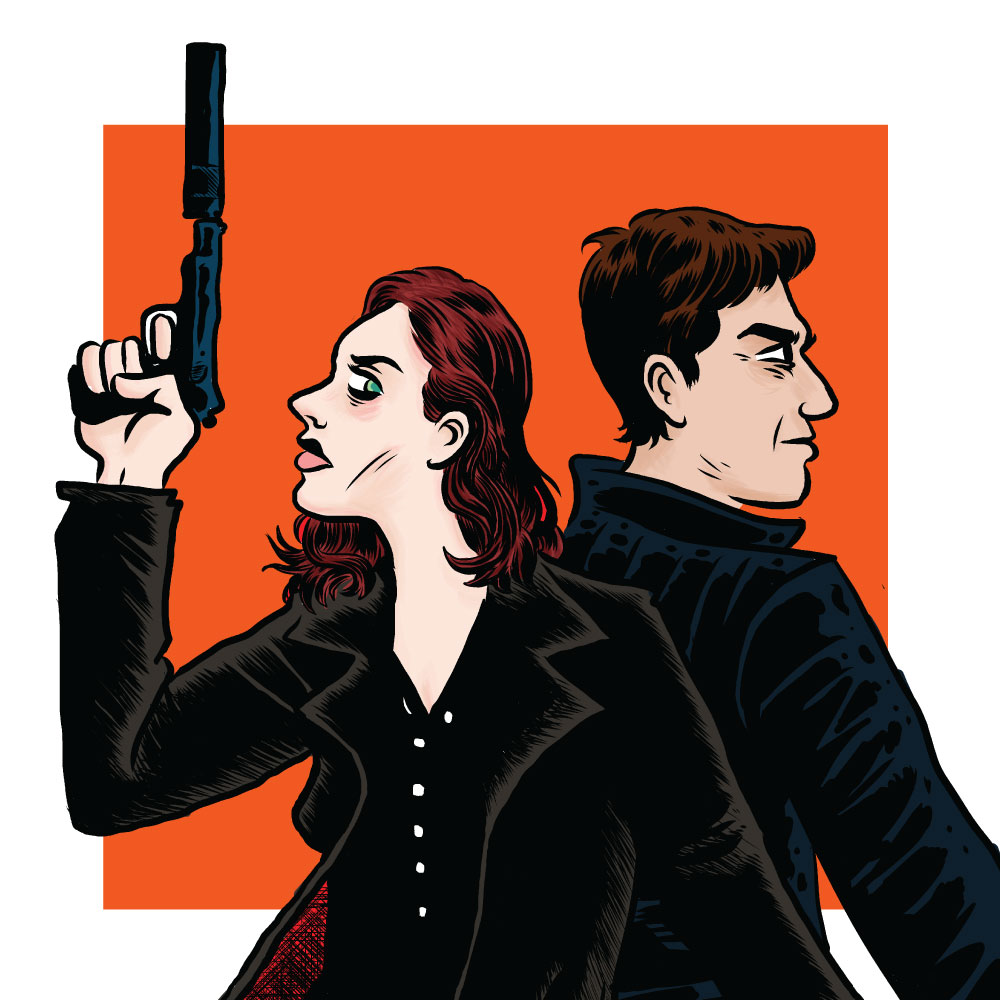 I remember walking through a mall with my Dad when I was about 12 years old and the classic MISSION: IMPOSSIBLE theme song came on over the garbled excuse for a sound system. A surge of excitement came over my father as he slyly looked my way and asked if I knew where the song came from without breaking his confident stride. I replied “Of course I do…ACE VENTURA.” I’ll never forget that oh so brief facial expression of disappointment confirming not only his age, but our obvious generation gap. It was not the answer he was looking for. Then 1996 happened and along with it came the jaw-dropingly amazing  Tom Cruise reboot of the franchise and I never made that mistake again. MISSION IMPOSSIBLE was redefined for a new generation and nearly 20 years later it’s still going strong delivering stellar espionage action that never disappoints. And yes MISSION: IMPOSSIBLE – ROGUE NATION continues that trend of awesomeness keeping the franchise alive and strong so kids all across the globe won’t mistake that damn theme when ol’ Dad asks where it’s from. While memories of the 66′ original series may not pop up in my mind, reminiscing about the Cruise version will just have to be considered meeting in the middle.

Oh shit! I’m writing a review aren’t I!? So my favorite aspect of this rejuvenated franchise is that each entry, while having some consistent elements, is basically a stand-alone film with largely different tones boasting a new director with each entry. The formula actually works quite well and keeps the series fresh and exciting. The original felt like a classic espionage action thriller with some nice twists and turns, I have no idea what the hell was going on in the second installment but I loved it, the third entry was the sweet spot for me geared much more towards action fans, GHOST PROTOCOL serving as the 4th added a lot of humor and some more spectacle, and now with the fifth entry we take a moment of pause, tone things down a bit, and focus on a fun and smart entry with just enough insane action peppered throughout to keep you on your toes. While the overall narrative is compelling, it doesn’t really change the game and is actually quite close to GHOST PROTOCOL in scope. I’d say the main difference here is that ROGUE NATION really presents what appears to be an impossible mission, and thanks to a smart and fun script, it was a blast to watch as it all unfolded seeing how our heroes overcame the overwhelming obstacles placed before them. And instead of having a central villain for Ethan Hunt (Tom Cruise) to pummel in the final moments, we instead have a multilayered story that unravels and reveals new truths surrounding the characters and agencies featured within that is anything but predictable. It took me a few days to fully appreciate the finale of this film since my dumb American ass is use to a swift punch to the face to wrap everything up. ROGUE NATION is actually really smart, and I think if you invest some thought into the character choices throughout the narrative you will walk away satisfied…even if it takes a few days to sink in.

As always, this is a Tom Cruise vehicle. You pay to see the man fully commit to his character and kick a ton of ass. He really is a dying breed as far as actors go. His screen presence is truly unmatched. He’s cool, he’s likable, he’s funny, he’s romantic (yeah I said romantic!), and dammit he’s a badass! Not to mention that the man does all his own stunts! And I’m not talking about sliding across the roof of a car or taking a punch! I’m talking about holding onto the side of a damn plane as it takes off (that scene took 8 tries to get right) and holding his breath for 6 minutes straight to get a scene just right. I’m not lying look it up. The man is legendary! Alright, enough gushing  you get it! He’s my favorite actor by far and ROGUE NATION gives me one more reason. Besides Cruise, a few familiar faces pop up in the form of Ving Rhames as the always trusty Luthor, Simon Pegg as the kinda funny Benji, and Jeremy Renner as “I guess I’m not taking over this franchise after all” William. Rhames is a nice addition to the ensemble as always but feels a bit bored this time around like someone paid him just enough money but not as much as he would have liked. Pegg’s Benji is actually kind of a distraction here serving as the Jar Jar comic relief that doesn’t really work for me. And Renner, who many thought would take over this franchise (*cough* Bourne *cough*), has a much lower key role serving more as a politician than fellow action star. And then there are a few newcomers in the form of Rebecca Ferguson as the tough as nails Ilsa who is quite the equal to Cruse’s Ethan and Sean Harris as the main villain Solomon Lane (Solomon Kane!?) who isn’t really a physical match for anyone but embodies enough needle-dickness (yeah I made that up) to get on your nerves and under your skin. He’s a fun and smart kind of villain that seems to be dangerously overconfident as if no one really challenged him in life. We all know the type. It was a good change of pace for the series and worked quite well. Oh, and Alec Baldwin is in there. Can’t forget him. Good job Alec, you’re aces kid.

And what is a MISSION IMPOSSIBLE movie without a bit of action!? The aforementioned airplane scene kicks things off straight away setting the bar high for the rest of the film. As the story progresses we are treated to quite a few fast and fun fight sequences which mostly highlight just how badass Ferguson’s Ilsa can be. She really was a match for Ethan and stole the show quite a few times. There’s also a pretty epic car/motorcycle chase that maybe bends the rules a bit as far as how much damage the human body can go through without dying. And then there’s a part of the big mission itself surrounding the infiltration of some kind of hydro-electric pump thing. It harkened back to the first classic MISSION: IMPOSSIBLE scene where Ethan had to drop down into a high-security office. The whole scene was pretty damn cool and intense. And come to think of it, Ethan really has lost a bit of his edge. It’s actually a good thing if you think about it because it humanizes the character a bit. Here in ROGUE NATION, Ethan is not the unstoppable force you may think. He’s actually quite vulnerable, makes a lot of mistakes, and has more misses than hits. If you are one for close calls, ROGUE NATION has you covered.

While my initial impression once the credits rolled was the desire for more jaw-dropping action and a more explosive finale, I actually appreciated the change of pace this time around after letting it stew for a few days. ROGUE NATION is a smartly crafted film with big payoffs that don’t rely on big explosions or a swift punch to the jugular. This entry made me think a bit more than I had to with previous installments and it was much appreciated. That said, there were still plenty of compelling and memorable action sequences to keep me at bay. Cruise owns the screen yet again and is joined by a mostly enjoyable cast with a few stand out performances from Ferguson and Harris. I appreciated ROGUE NATION going back to its roots with this iteration focusing on a seemingly impossible mission creating a smart and engaging entry that can confidently stand next to the others as a great entry. We now have 5 stellar entries in this franchise spanning 20 years. Bring on the 6th.