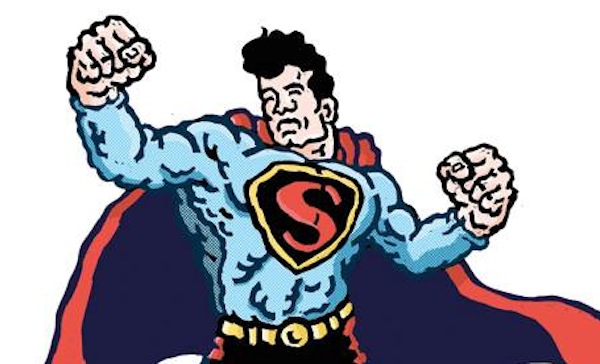 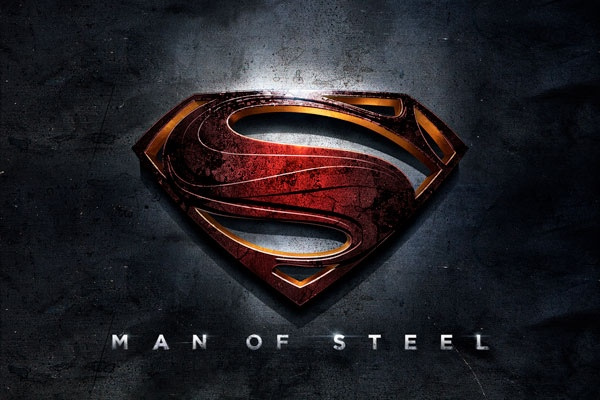 MAN OF STEEL was not only my #1 most anticipated summer blockbuster of 2013, but also served as the film I wanted to see most this year (even beating out PACIFIC RIM!). So as you can imagine, my expectations were pretty damn high for this one. While I am a Marvel-man myself (Nothing beats X-MEN), I do appreciate DC and have a special place in my little nerd heart for Superman above all of DC’s lineup (yes, even over Master Wayne). Just to paint a picture, I have always been a fan of the original (all of them) SUPERMAN films starring Christopher Reeve (SOMEWHERE IN TIME), I dabble in the comics from time to time (ALL-STAR SUPERMAN anyone!?), and have earned my official nerd patch for enduring through all 10 seasons of the CW’s SMALLVILLE. Each and every episode in order mind you. It is also worth noting that I think director Zack Snyder (SUCKER PUNCH) is amazingly talented and was a perfect fit for this action-packed film, but more on that later. So yeah, in a nutshell, this is the guy reviewing MAN OF STEEL for you right now. Take it or leave it. So enough babbling already, on with the review!

MAN OF STEEL directed by Zack Snyder and starring the relative unknown Henry Cavill (IMMORTALS) is finally here! MAN OF STEEL is the reboot this franchise needed. It tells the tale of a young alien boy who crash lands on Earth after his home world is destroyed. He is our planet’s last hope and must confront his unique history and find purpose all while learning how to fit in with humanity. All his life he has been taught by his father that he will one day change the world, but he never really understands what that means until he is forced to defend Earth from invaders from his home world. The beauty of MAN OF STEEL’s story (compared to other Superman films) is that it lays on the sci-fi extra thick and truly shines as an “alien invasion” flick that gradually evolves into a superhero themed sci-fi flick! Very cool stuff here especially for a Superman movie. Just to give you a hint at how far this film goes into hardcore sci-fi territory; Russell Crowe as Superman’s father Jor-El rides a hulking dragon around his home world as it is being destroyed from the inside out. Bad ass anyone!? Yes, yes it is.

The story here runs super smooth even considering its near 2 and a half hour run time, and I was never left bored or wanting things to move forward quicker or slower. It was all done just right like a nice warm bowl of porridge.  Something I highly appreciated as a fan who has seen this character’s origin a million times over was the fact that only key moments from Superman’s past were shown via flashbacks at appropriate times. We were not forced to watch hours of an origin story that we pretty much already know. Instead, we jump right into things and learn what we need to learn from the past as needed. This strategy really let Superman become Superman a whole hell of a lot quicker, which in turn, gave audiences the chance to spend a lot of time with our hero fully costumed and kicking ass as he should. When the credits roll, just take a minute to look back at where the character was from the beginning of the film and compare it to the last 20 minutes. The character comes a long ass way in a short amount of time and I have zero complaints about that. If I were to share one nitpick that took me out of the experience a bit, it would be the horrendous moments of product placement. The last thing I want in my Superman movie is a plug for Nokia, Sears, Budweiser, and even I Hop for craps sake! While this never flat out ruined the film for me, it was really distracting and unwelcome. 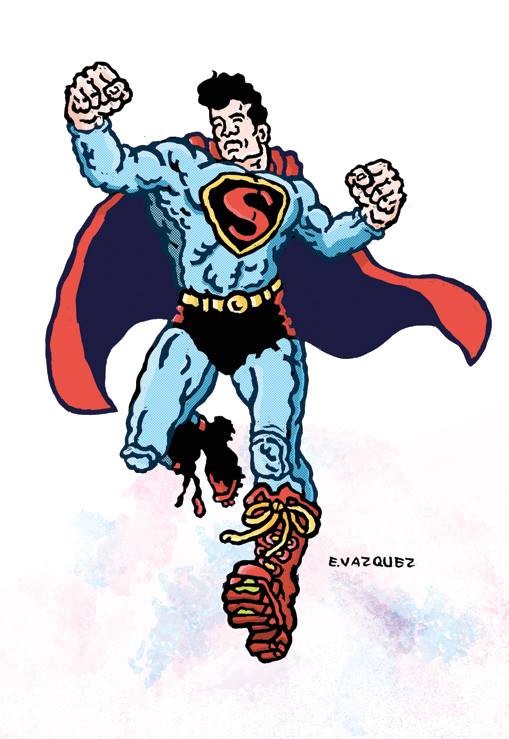 Henry Cavill as Clark Kent/Superman was near perfect. This is a much different take on the hero we all know and love. This version of Clark is a lot more emotional, struggles with his purpose and powers, and truly has some unresolved anger issues that thankfully lend a helping hand in the development of some intense heat ray charged eyeballs. My point is, this Superman is bad ass and he does things in this movie that are highly unexpected, especially for longtime fans of the hero, and it all works so damn well. This version of Superman has an edge to him, he is very emotionally driven, and (almost most interestingly) he is a complete novice when it comes to being a hero. It’s such a great thing to watch and Cavill has an enormous screen presence that will now make him a household name. I am a fan and can’t wait to see what he does next with this character as the franchise will most surely move forward and hopefully result in at least a trilogy. Fingers crossed.

Michael Shannon (BOARDWALK EMPIRE) as General Zod was a breath of fresh air. This is what I have always wanted in a Superman film. A villain that can actually give Superman a run for his money physically. Shannon really owned this role and gave us his version of Zod. A ruthless powerhouse that wants nothing more than to destroy planet Earth and kill Superman. He is fierce, emotionally charged, and born to fight. Amy Adams’ (THE FIGHTER) version of Lois Lane is by far the boldest and most appreciated yet. This is a smart, strong, independent woman who does not rely on being a victim or a sex symbol to win audiences over. She has a very natural beauty here that shines due to her ambition, talent, curiosity, and resourcefulness  Hands down the best and most realistic version of Lois I have seen yet. Well done.

As mentioned before, Crowe as Jor-El was awesome and unexpectedly bad ass. It was great seeing him pummel Zod and his crew on Krypton (we get to see Krypton!) and this is no short-lived cameo either. Jor-El is a main player in this film and I liked that very much. But the real show-stealer in MAN OF STEEL is Kevin Costner (WATERWORLD) as Jonathan Kent, Clark’s adopted Earth father. He is perfectly stoic and really adds some emotional resonance to this film. A handful of his scenes had me nearing tears along with a few other key sequences in this film which is a testament to how much I connected to the story and the characters. While Costner’s time here is on the short side, he needs some true acknowledgment for his stellar performance. Not since Uncle Ben from the original SPIDER-MAN movie has a father-figure tugged at my heart strings more. Adding to this already knockout cast was Diane Lane (JUMPER) as the nurturing Martha Kent, Laurence Fishburne (THE MATRIX Trilogy) as the big boss man Perry White at The Daily Planet, and an unexpected treat in the form of Antje Traue (PANDORUM) as Zod’s amazingly kick ass 2nd in command Faora-UI. She is almost a show-stealer in the action department. Besides these main players, there are a handful of others (I wish I could name them all in detail!), but the main point here (for times sake) is that everyone in this film delivers their A-game and what results is a compelling cast of characters that all have their proper place and moments to shine. 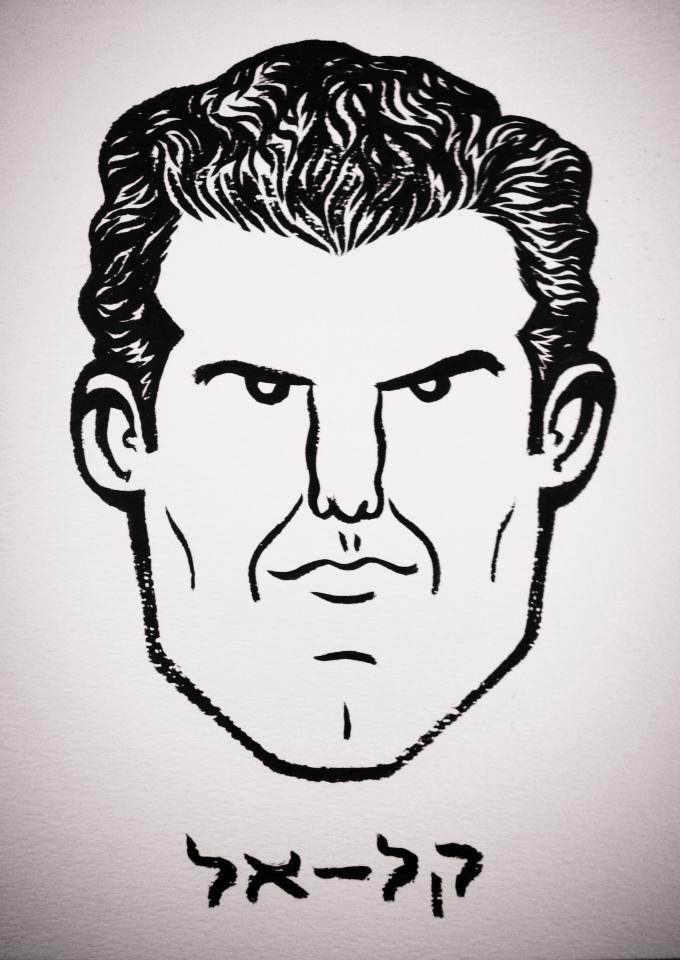 Now for the main course. The action. This is what I have always wanted out of my Superman films. Action, action, and more action. Does MAN OF STEEL deliver!? HELL YES!! The action in this film is unlike anything I have ever seen. Simply epic. This is what it would be like if the Greek gods fell from the heavens and battled in the streets. Again, epic. MAN OF STEEL does a fantastic job setting up its story and developing the characters enough for you to actually care about the action. Besides it being a visual masterpiece, it carries a certain emotional weight to it that is necessary for any action sequence to go from just “kick ass” to “stunning”.

I swear to you right now that MAN OF STEEL features epic and brutal action sequences that are like nothing I have ever seen before. The bar has been raised. This version of Superman is still fitting into his powers, is an extremely sloppy fighter full of rage, and it is made obviously clear that he is the most powerful being in the universe whether he has refined his skill set yet or not. The last 20-30 minutes of this film is pure action heaven. Nothing I say can prepare you for it and it needs to be seen to be believed. Thank you Zack Snyder and crew for not only giving me what I always wanted in a SUPERMAN film, but for giving me hands down the most epic one-on-one fight sequence in history. The only battles I can think of that come close to this level of awesome is the final showdown in STAR WARS EPISODE 1: THE PHANTOM MENACE  with Darth Maul and the epic showdowns in any of THE MATRIX films. I can’t rave enough about how great the action is in this movie and I have zero complaints.

Once the dust settled, and my heart rate could return to normal, I was left with what is hands down one of the greatest superhero films of all time. MAN OF STEEL is a hardcore sci-fi epic dealing with the coming of age of an alien struggling to fit in and make a difference on the planet he now loves and calls home. Zack Snyder and his team have crafted a wonderfully epic and fun superhero film that can finally give Marvel a run for their money. The story was brisk with excellent pacing that spared us another full-on origin story. Henry Cavill as Clark Kent/Superman was spot on. The rest of the cast including Costner, Shannon, Crowe, and Adams gave wonderful performances that carried emotional weight. And above all, the action delivered tenfold giving fans and newcomers alike something new and awe-inspiring to experience. Superman is back and MAN OF STEEL is a true gem for a nerd like me. It’s an exciting time to be a Superman fan, and I simply cannot wait to see what is in store for this franchise and its inevitable sequel. Bring it on!