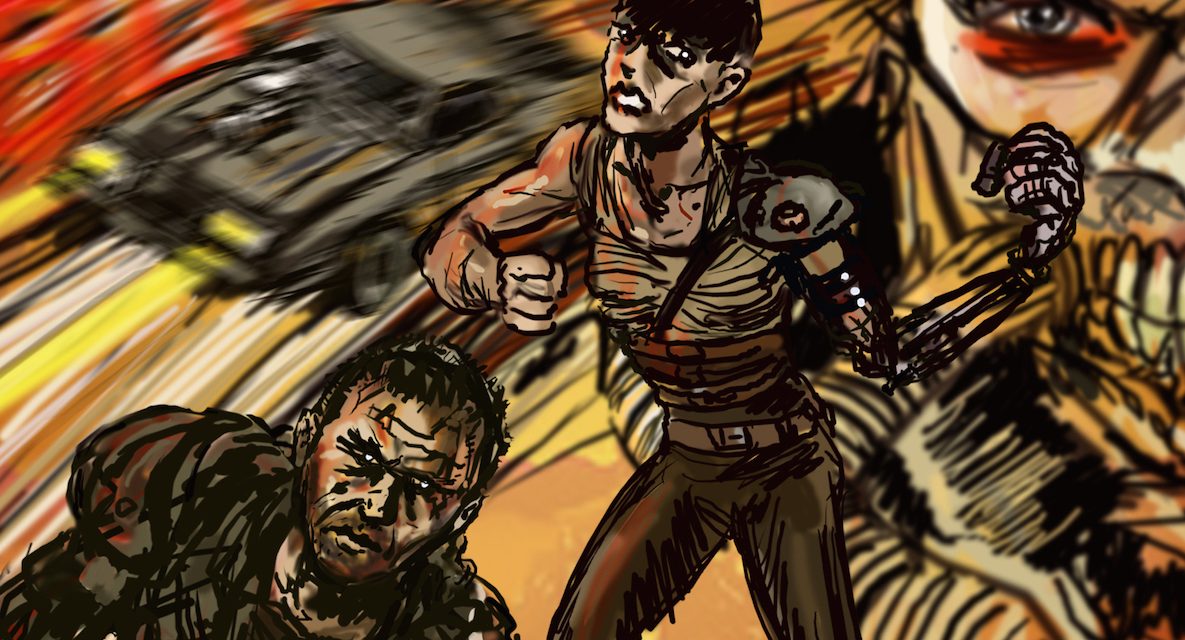 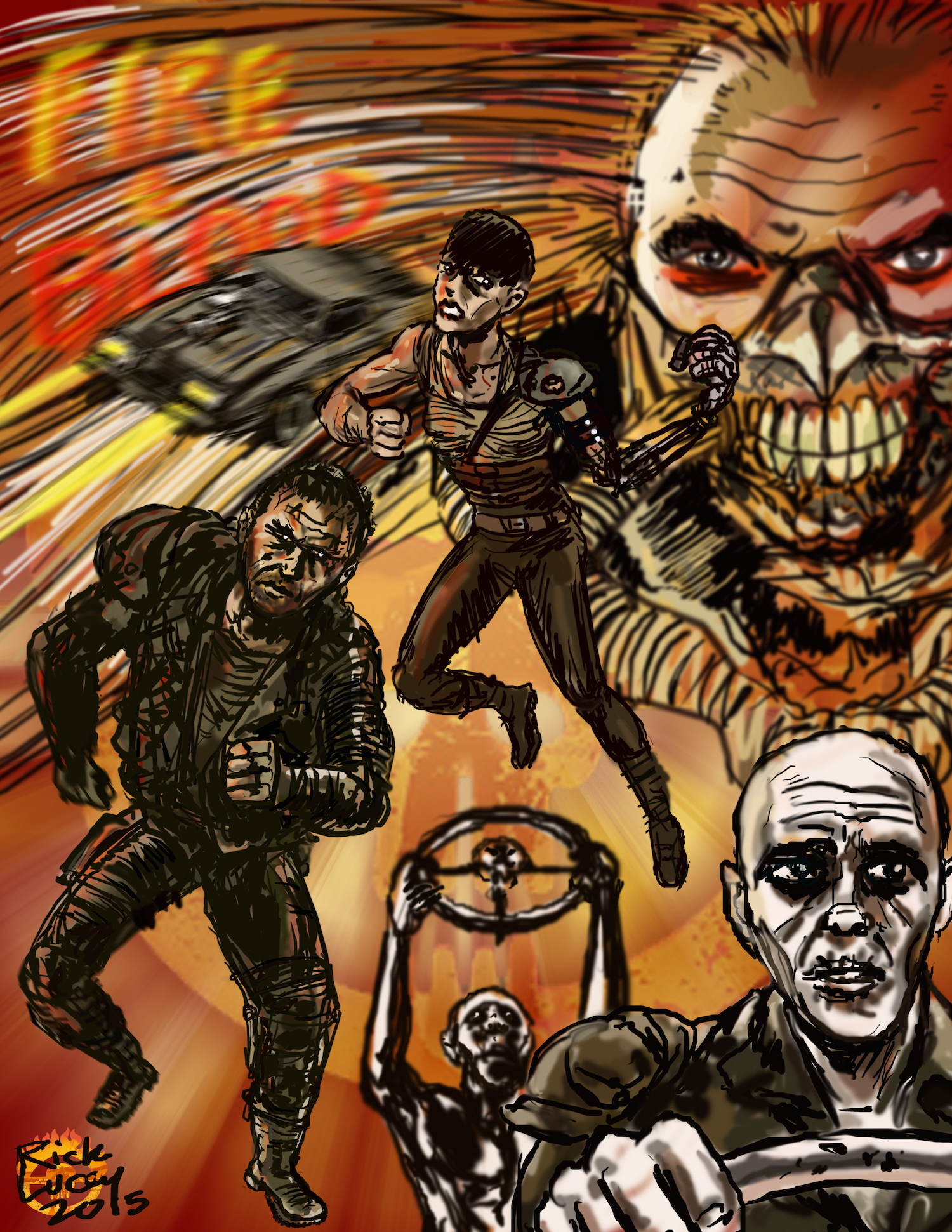 I shouldn’t have to tell you to watch this movie.  You should just already know that you have to watch it.  There should be something hardwired into your DNA…something primal that’s screaming out a desire for an epic visual marvel made up of absolutely spellbinding production design, vibrant colors, fascinating and quirky characters that break the mold on traditional action hero stereotypes and intense action sequences that assault your senses…and you don’t mind one bit.  I shouldn’t have to tell you to watch this movie…but apparently that’s the case since my screening for MAD MAX: FURY ROAD was almost a ghost town while people were lining up for another helping of actors lip-synching to substandard auto-tuned cappella tunes across the way.  Come on, people!  You can listen to Anna Kendrick sing and pretend that Rebel Wilson is funny any old time.  Seeing FURY ROAD in all of its glory in 3-D is an opportunity that only comes around once in a lifetime.  Hell, if it will get your butts in the theater, this is the one time I’ll advocate bringing your kids and babies to the movie.  It’s bombastic enough that their crying and squealing won’t bother me, and who knows?  Maybe exposing kids to FURY ROAD is the movie equivalent of having them listen to Mozart at an early age.  I guarantee you that within 5 seconds of the film starting, the amount of firing synapses and neural connections in their brains will have doubled.

FURY ROAD once again follows “Mad” Max Rockatansky, the role having been passed from Mel Gibson to Tom Hardy.  The suburban dystopia showcased in the 1979 original MAD MAX has blown up into a full-on apocalypse as a PTSD-ridden Max is quickly captured by a gang of pale motor-anarchists called the War Boys and is immediately trussed up as an unwilling blood donor (a “blood bag,” if you will) complete with a dangerous-looking face mask.  Is this gonna be a thing in Tom Hardy movies now?  He’s contractually obligated to wear face masks for a certain amount of the film?  If this is gonna be a thing, then sign me up ’cause it looks amazing!

Anyhoo, Max soon finds himself along for the ride as the sadistic King Immortan Joe (played by “Toecutter” from the first film) kicks off a bloodthirsty pursuit of one of his traitorous lieutenants, mechanical-armed Imperator Furiosa (Charlize Theron), who has fled with his Five Wives in order to liberate them from their roles as slaves of breeding.  Essentially, the chase propels 95% of the film, but man oh, man what a chase!  The actions and visuals are captivating and insane at the same time.  You have cars completely covered in spikes and roaring through the desert like rust-colored Sonic the Hedgehogs!  You have War Boys spray painting their teeth with chrome and going “kamikaze” on vehicles with exploding spears!  You have tough-as-nails grannies and pregnant women blowing the heads off bad guys with sniper rifles!  You have an eyeless “Mouth of Sauron”-looking motherfucker in red pajamas and a bungee harness whose sole purpose is to shred a mean guitar on Immortan Joe’s Wall-O-Sound-mobile!  You’d think that, with all of this visual stimulation going on, we’d lose sight of the story and Max, but no!  Director George Miller proves that he still has plenty of engaging and awesome tales to tell with the franchise that made his career.  The scope and style of FURY ROAD shows off just a fraction of the tricks and gimmicks that I’m sure he has tucked away for even more MAD MAX fodder.

Don’t get me wrong: as much as I want everyone under the sun to experience this film, it is not pulling its punches.  The movie wholeheartedly embraces its post-apocalyptic background and all of the disturbing concepts that come with it.  The backstory behind Joe’s form of government and the Wives is horrific when you think about it, but Miller touches upon these societal no-no’s and ideas without feeling overly gratuitous or reveling in the depravity.  If anything, it makes you root for the heroes even more as you hope they get out of this shitty situation alive.

Thankfully, the characterization and performances of the cast make the action spectacles shine even brighter throughout.  Not set on just imitating Gibson, Hardy makes Max all his own while still retaining the cold and stoic demeanor we expect from such a “lone wolf” hero.  Max is awesome as a lead, but his supporting players are equally impressive.  Theron as Furiosa is amazing to watch as she plays “cool bad-ass” just as well as Max while still conveying the amount of pain and sacrifice the character is pouring into her efforts to get her passengers to safety and seek redemption.  The Wives more than hold their own and prove themselves to be more than just the possessions or helpless waifs that Immortan Joe views them to be.  Rose Huntington-Whiteley (TRANSFORMERS: DARK OF THE MOON) shows us that she can actually act in this movie as she is given one of the more haunting images to carry by using herself (and her baby bump) as a human shield during the chase to keep Joe at bay.  Speaking of Joe, he and his ilk are appropriately over-the-top in their roles as villainous Australian hillbillies whose sole focus is to perpetuate their bloodline.  But for me, the performance that stood out was that of Nicholas Hoult (X-MEN: DAYS OF FUTURE PAST) as the War Boy Nux.  This character, without a doubt, has the most fulfilled story arc in the movie.  He starts out a sickly novice attached to Max out of necessity (being the recipient of his blood “donating”) and quickly transforms into a henchman hell-bent on finding a death worthy enough to allow him entrance to the warrior’s paradise of Valhalla.  But Nux soon becomes disillusioned with Immortan Joe’s crusade and strives to atone for his mistakes, culminating in a sacrifice that made me a little misty-eyed with its appropriateness.  Seriously, the action may have you crying tears of joy, but the strong cast and characterization keeps you anchored and invested in all of the chaos.

Again, I cannot stress enough how much MAD MAX: FURY ROAD needs your support.  It’s insanity and destruction at full-throttle, but Miller finds a way to make everything work in context and still juggle an engaging morality tale of humanity’s best shining through even at its worst and most depraved.  Solid performances across the board, breathtaking action sequences and visuals that earn every cent of a 3-D screening make the movie a must-see not just for action film fans, but also for anyone who enjoys film in general.  There has not been anything quite like this in a long while, just from a visual or stylistic standpoint.  There needs to be more movies like this.  Bold.  Dynamic.  Brutal.