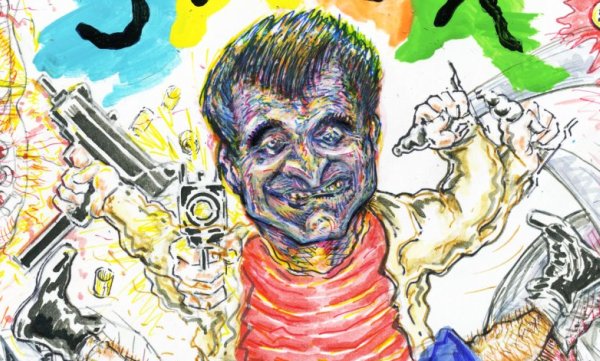 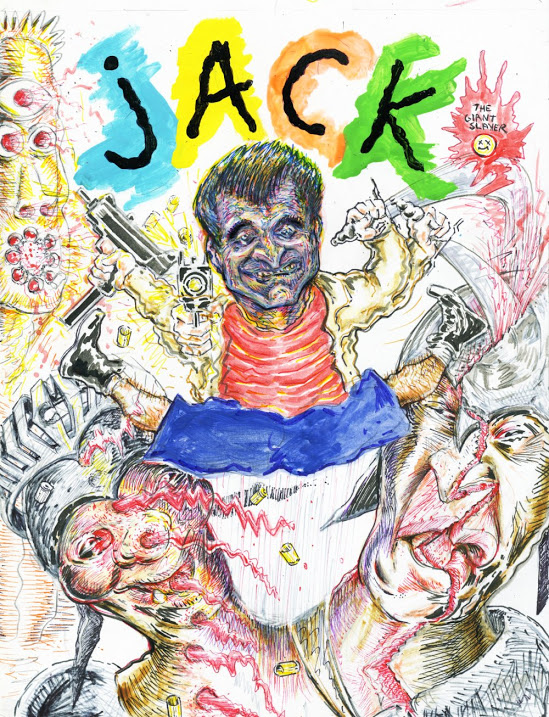 I moved out of New Jersey 9 years ago because I realized that I had no idea what the hell I was going to do with my life after college. I had been told that I was suppose to ‘grow up,’ but I had no idea what that even meant or even how to accomplish it. Guided only by the cultural teachings of my youth, I saw laid before me a path where I could ‘Go to college. Get a good job. Meet someone nice. Get married. Buy a house. Have some kids.’ When presented with this reality, I chose to instead climb a beanstalk of irresponsibility and seek adventure in the magical mythical land of San Francisco.

JACK THE GIANT SLAYER can definitely be seen as a ‘coming of age’ story where our youthful main characters rebel against the grown ups (giants) who seek to oppress them and take away their right to chose their own destiny.   It can also be seen as an allegorical representation of running away from the responsibilities that come with growing older. But, mostly this movie comes across as a modern day re-imaging of a classic fairy tale and offers very little more beyond that surface layer. Also… Call me crazy, but, weren’t Jack and the Beanstalk and Jack the Giant Slayer about two different Jacks? 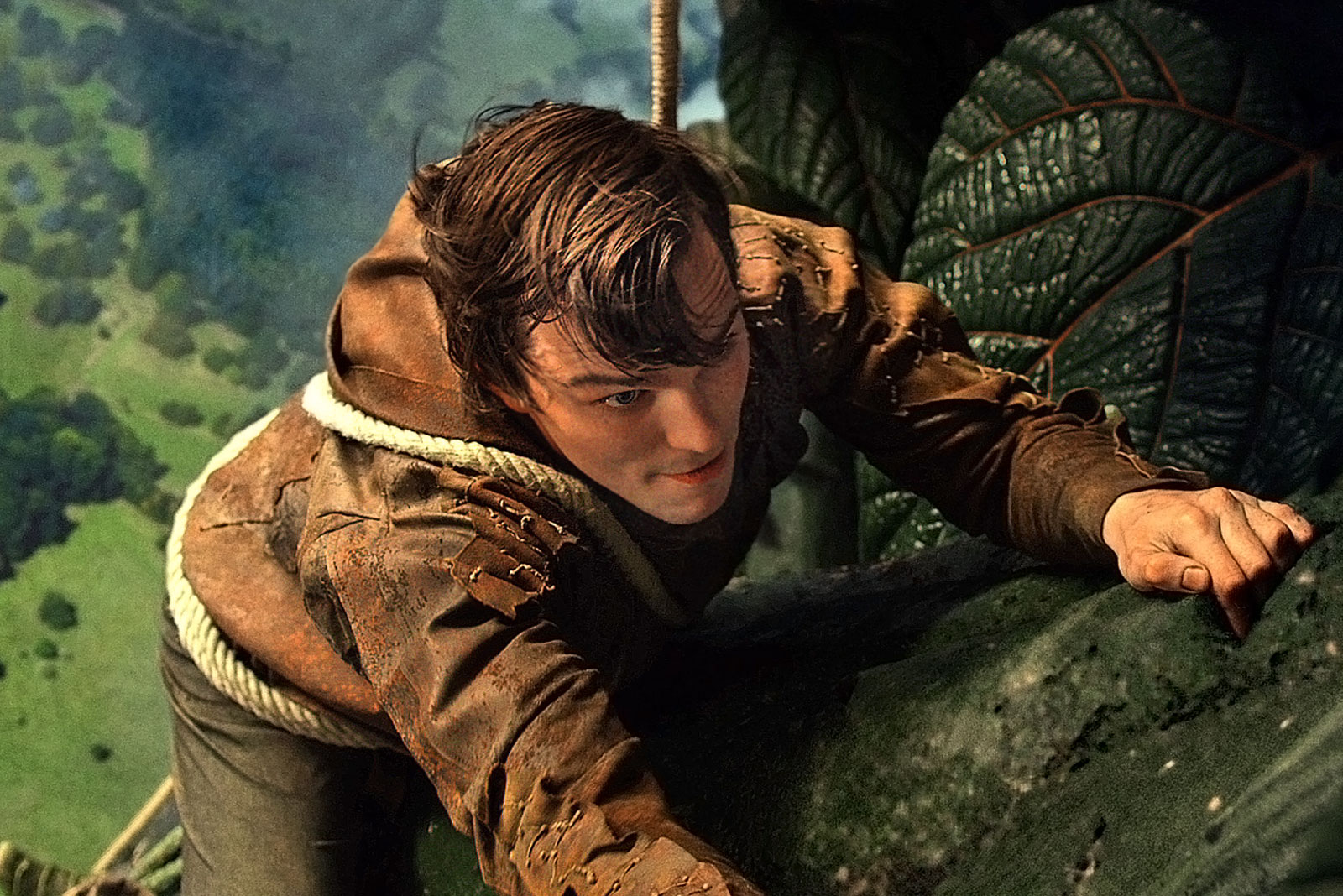 JACK tells the story of two very different (but-not-so different) kids who are trapped by their very different destiny’s.  On one side, we have the peasant boy Jack, played by Nicholas Hoult (WARM BODIES , X-MEN:  FIRST CLASS), who grew up wanting nothing more than to defend the kingdom, as a knight, against the legendary monsters in the sky.  Being of the peasant class though, Jack is constantly reminded by his well-intentioned prick of a father that the only life he can ever hope to achieve is that of a farmer.  Then there’s Isabella, played by Eleanor Tomlinson (ALICE IN WONDERLAND), a princess who prefers to hobnob with the common people and wants nothing more than the right to choose her own destiny. Being of the royal class, Isabelle is constantly reminded by her well-intentioned prick of a father, played by Ian Mcshane (DEADWOOD, PIRATES OF THE CARIBBEAN: ON STRANGER TIDES), that the only future available to her is that of an arranged marriage to the royal Machiavellian charlatan, Roderick, played by Stanley Tucci (THE HUNGER GAMES).  Luckily, a series of serendipitous events propel Jack and Isabelle up a beanstalk where they must defend their kingdom against an exiled race of giants that live in a floating land above the clouds. 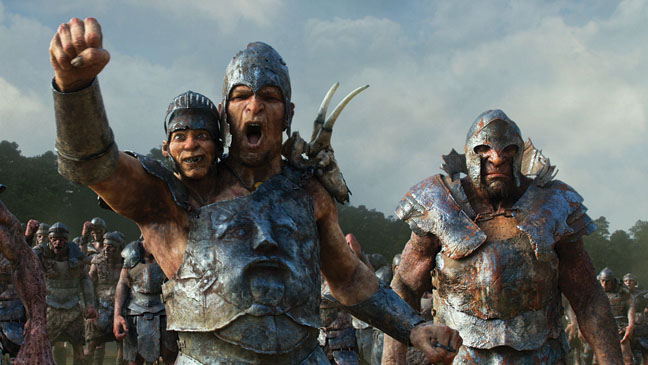 The beginning of this film felt like watching a couple of teenagers complain about how hard their lives are because they have to take the trash out once a week. At the beginning of the movie, I think you’re suppose to feel sorry for Jack who has now lost both parents and is living with his ‘evil’ step uncle. This is hard because Jack really does have a way of fucking everything up and making life on the farm more difficult. His uncle gives him the simple task of taking their horse to the kingdom to be sold. As Jack sets out, his uncle pleads for the seemingly lackadaisical Jack to ‘not to get distracted.’ Which seems to be something Jack does quite often. True to form, the first thing Jack does is take in a puppet show or some bullshit. Naturally, he then runs across the princess who is being hassled by a couple of nogoodnicks. I guess Jack has noble intentions or something, I dunno? You then learn that Isabelle seems to have a bad habit of breaking out of the castle and being constantly in need of being rescued by her royal bodyguard Elmont, played by the Ewan McGregor (STAR WARS EPISODE I: THE PHANTOM MENACE, BIG FISH). I guess Isabelle is doing it because she wants to be a better queen or something, I dunno?  Jack then lets a monk convince him to give him his horse in exchange for a bag of magic beans. Naturally, these are the same beans that the monks once used to create a ‘bridge to heaven’ to meet God, but instead ended up getting their faces chewed off my a race of poorly rendered CGI giants. 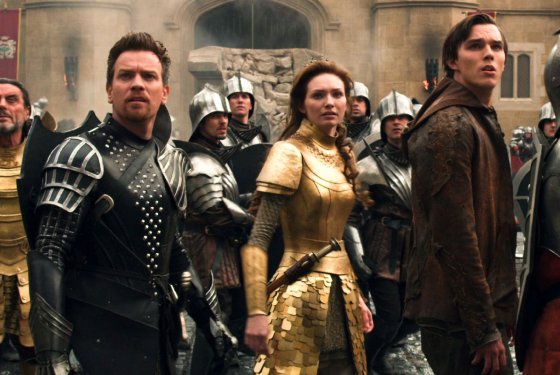 At this point, the movie seems to lose all deeper substance and any hope of an allegorical interpretation. Not to say that it is bad, but, there isn’t really more than what you see and what you see isn’t all that great.  Jack joins up with Elmont and his crew as they set out up the beanstalk to rescue the princess from the mysterious land above the clouds. They quickly discover the sinister giants that inhabit the cloud paradise and spend the rest of the movie attempting to not be eaten and or stepped on by them.

My overall impression of this film is that director Bryan Singer did the best he could with the material he was given. The movie has the feel of a good director who got stuck with a bad script. The final battle against the giants is pretty fun and the CGI for the beanstalks is pretty outstanding.  The CGI for the giants, not so much.  It seems as if they only really put in all their creative attention on the King of the giants and not nearly enough on his generals ‘Fee’, ‘Fi’, ‘Fo’ and ‘Fum.’ Roderick’s assistant is like nails on a chalk board and I literally cheered when he suffered.  It’s never clear why Roderick intends to rule the kingdom with his brainwashed legion of giants, instead of just waiting until he becomes king? Ewan McGregor may be the only saving grace for this film. He is completely charming and outstanding in every scene. Nicholas Hoult and Eleanor Tomlinson are likable enough to maintain your interest, but just barely. Stanley Tucci is pretty great too, but is not around nearly long enough to save the film.  The plot does take some unexpected turns, but, still feels all too predictable. I did find myself waking up slightly when the giants attack the kingdom, but, it was a very long journey getting there. (I was also greatly disappointed that no one makes the obvious ‘you don’t know, Jack’ reference.  C’mon people!) You never really figure out why the giants are such assholes and why there so eager to end the reign of man?  I guess they are something of prisoners on their floating Continent, but, that’s what you get when all you do is eat people and steal their Faberge eggs.