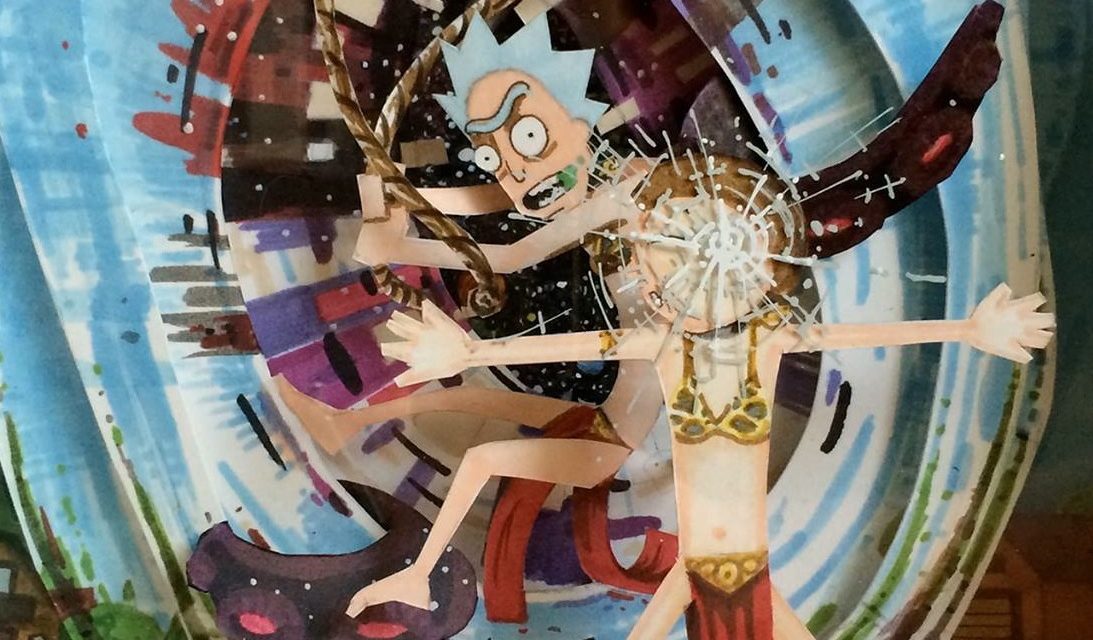 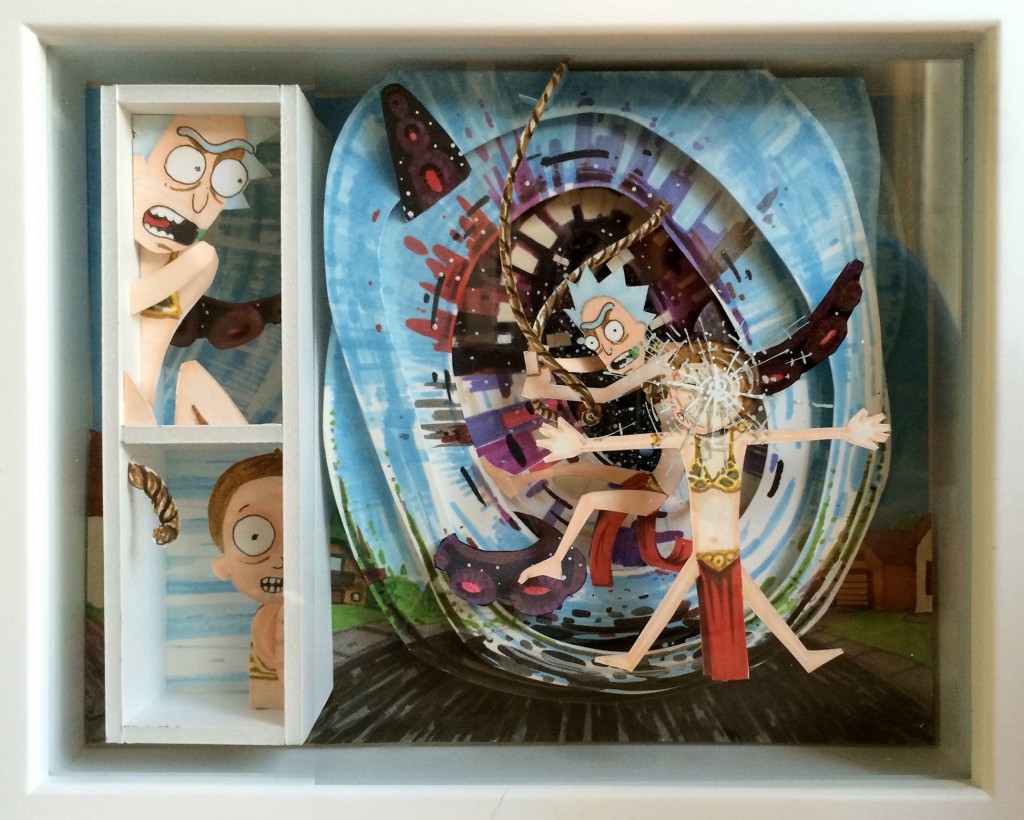 Right now, in a dimension slightly sideways from ours, my insides are comprised entirely of cheeses and spiced meats. I’m sitting on a chair made of bubbles and I am typing away on my computer with my little salsa fingers. I will never meet this taco version of myself. I am just a boring ole human dildo salesman. I don’t have anywhere near the massive intellect required to tip tap across the multiverse. Which, is probably for the best considering my questionable moral compass. Because, as we all know, such scientific wherewithal belongs solely in the responsible hands of those who properly respect the awesome power they possess… *burp*

Season 1 of RICK AND MORTY just ended and left my brain a moist puddle of grey matter and Hollandaise sauce. As I slowly emerged from my binge coma, I looked around and discovered that I was one of a few, within my group of friends, that had fallen victim to the sweet siren call of this practically flawless collection of high concept sci-fi story telling. Justin Roiland and Dan Harmon’s animated smorgasbord is the sloppy after-birth of a union between an extremely scientifically complicated episode of DOCTOR WHO and the foulest, most downtrodden episode of ITS ALWAYS SUNNY IN PHILADELPHIA. The show is an animated goofball amalgam of some of the most important pieces of sci-fiction that has come out in the past 100 years and shows us the gritty side of imaginary extreme fringe science. How, from the perspective of a broken genius and his maladjusted grandson, science fiction can be both entertaining and tragic. This show tap dances on toilet bowls and tickles the ivories of my imagination and I barely know anyone who has seen it.

At first glance, RICK AND MORTY appears to be nothing more than any other animated show about a grandfather and grandson having foul mouthed adventures through space and time.  The concept alone isn’t too far beyond what you think you’ve already seen. It becomes immediately clear that the show’s complexity is equaled only by its limitless world building and ‘smarter than it should be’ comedy.  The science fiction is at play and Harmon and Roiland freely manipulate and convert it for their own twisted needs. A simple request to ‘make a dog slightly smarter’ results in Rick carelessly tossing over a helmet that almost results in the complete domination of mankind by cyborg canines.  While half paying attention, Rick creates an android whose sole purpose is to ‘pass the butter.’  As the crushing reality of the random meaninglessness of existence dawns on the ‘butter robot,’ Rick’s only reply is ‘yeah, join the club.’ Instead of spending an entire episode to state the obvious fact that the man running the cursed antique shop is clearly the devil, Rick having experienced a life time of M. Night Shyamalan level plot twist, outs the man as the devil in the first 3 minutes and spends the rest of the episode transforming the cursed items into valuable artifacts to anyone willing to pay. When Morty requests a love potion that will help him win over the girl of his dreams, Rick absentmindedly and nonchalantly throws together a collection of chemicals that result into the entire world turning into ‘Cronenberg ‘ type monsters. Once it becomes clear that their Earth is no longer salvageable, they simply jump into an almost identical reality where versions of themselves solved the Cronenberg problem, but died immediately after. Which would have been their fate if they had successfully cured their world, so, look at the bright side. Now, let’s bury these alternate versions of ourselves and call it a day.

The show continually impresses me with how true to life each character is, especially when they find themselves thrown into such outlandish sci-fi scenarios. One second, Morty is miniaturized and injected into a hobo (who just so happens to have an out of control amusement park built inside of his body) and the next second, Morty’s parents are struggling to find the meaning in their seemingly meaningless marriage. Everyone in the show is human.  They are flawed and self aware. They are selfish and hopelessly dependent of one another.  They ask the questions you would ask and react in very human ways. Morty’s parents and sister are just trying to get by in their lives, while Rick is dragging Morty from one toxic alien adventure to the next. It makes you wonder how Morty’s mom grew up to be as self aware and sane as she did? You groan whenever Morty buzz kills Rick’s shenanigans, but completely understand how he would feel when faced with such emotionally crippling scenarios and situations. While there isn’t much of a continuity to this show, I would recommend watching it in chronological order.  It’s hard to say if the characters actually grow throughout the season, but your understanding of them definitely does. Each episode usually contains the primary ‘Rick and Morty’ story line, with a sub story involving their family.  One of my favorite background stories involves the introduction of a lifeforms called Meeseeks whose only purpose in life is to help you complete a simple task and die immediately on completion. In episode 1, Rick and Morty attempt to escape a transdimensional customs department and end up killing a few bug-like security creatures in the process.  The look on their faces, when their buddies are killed, will break you.  Every death has impact. Every action has consequences. What hooks you to MORTY AND RICK is how every extreme cartoon sci-fi concept is recognizable in your nerd brain and plays out similarly to how you’ve always imagined you would react in those situations. This show is hysterical and brilliant and definitely should be on your radar.