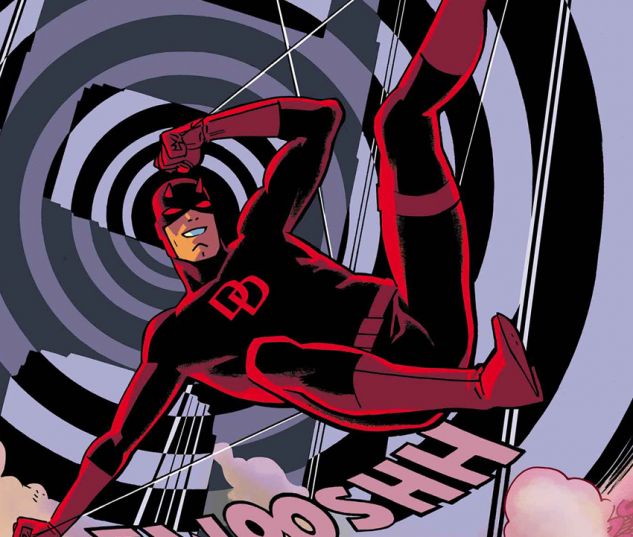 I will be honest with you and say that I’ve been ‘blind’ to the Daredevil comics for the past few years. I have a very basic grasp on the character. For those of you who aren’t familiar with the character at all,  Matt Murdock was a child who lost his sight after selflessly pushing an innocent bystander out of the way of a truck carrying toxic waste. After being splashed with the strange chemical, he was able to still ‘see’ through his super enhanced super senses.  With these powers, he became a lawyer by day and a super hero by night.  With New York City as his playground, he became the mysterious hero of Hell’s Kitchen. Along with his trusty partner (Lawyer partner, not sexy partner) Foggy Nelson, Matt set out to make a difference with the hand he had been dealt.  Except, now (here in this Marvel Now! relaunch) he’s doing it in San Francisco.

The first thing you need to know is that Matt Murdock’s secret identity is no longer so secret.  Which means that he is now free to use his special abilities in and out of the costume. The opening scene of the book has everyday Matt Murdock (not Daredevil) using his heightened smell, touch and hearing to help decipher where a kidnapped girl is being held by super analyzing the teddy bear and the ransom note the kidnapper’s sent. Considering Daredevil is basically just a regular human, it makes sense to send him to San Francisco where the super hero shenanigans are a bit more, subdued.  I love the fact that Matt is open about his superhero side and its public knowledge.  This allows for some very interesting character developments and story premises.  Writer Mark Waid has an excellent grasp on Murdock’s powers and seems to enjoy finding new ways for him to use them. They sort of play Matt as a super hero version of SHERLOCK.

This is definitely the kind of book I enjoy.  A smart superhero comic that superbly melds smart detective story lines  with clever alternative uses of the main characters super powers.  Not being familiar with Waid’s earlier take on DAREDEVIL, I can’t tell how this stacks against them, but, this relaunched book definitely grabbed my interest and I’ll definitely be continuing to pick up the book.