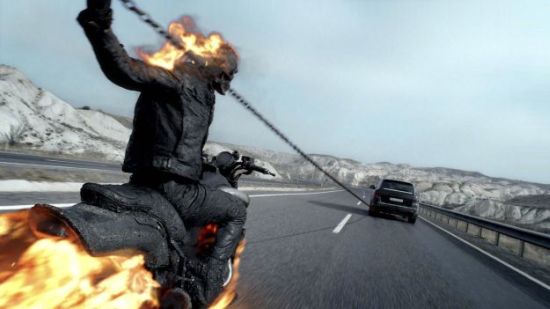 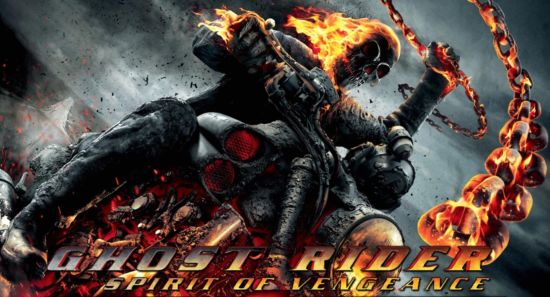 Marvel’s Ghost Rider is back in GHOST RIDER: SPIRIT OF VENGEANCE directed by Mark Neveldine and Brian Taylor who you may know as the directors behind the CRANK series and GAMER. Their talent for the ridiculous is a good match for this franchise. The film once again stars Nicolas Cage (CON AIR, FACE/OFF) as Johnny Blaze, aka Ghost Rider, in this sequel to 2007’s GHOST RIDER. While the film can be considered a sequel, it is more like a reboot for the franchise and takes on a bit darker tone than the previous effort. Well, as dark as you can get with the PG-13 rating. Boo! I admit I am a fan of the original GHOST RIDER film and had high hopes for this sequel after witnessing the amazing trailer. I find it hard to report that this sequel did very little for me and I was left extremely disappointed besides a few cool moments scattered throughout. The plot is dull and boring, the actors (besides Cage of course) are often painfully bad, and the action leaves much to be desired. Don’t get me wrong, I’m a HUGE Marvel movie fanatic and had some fun. I just expected much more from this one and was left a bit disappointed.

Let’s start with the plot. There is a very brief stylized introduction to the character Johnny Blaze (Ghost Rider) to catch audiences up to speed at the beginning of this film. This intro, voiced by Blaze himself, felt overly simple and attempted to be funny at times even resorting to a corny joke that alluded to the devil himself residing in the body of Jerry Springer. It was pretty embarrassing. The good part about this intro was that it let the franchise start fresh and get straight into the action minus a long drawn out origin story that plagues a number of films in this genre. Once the film starts rolling it is evident we are dealing with a borderline B movie experience which may or may not be a bad thing depending on who you ask. Blaze is in hiding and has been dealing with his demon for some time now. Soon he is called upon by a mysterious friend to stop the devil who cursed a long time ago. This mission comes with the promise that his curse could be lifted. That’s pretty much it. Stop the bad dudes and save your soul. The story moves forward at a very slow pace even for a movie that only clocks in at about 1 hour and 25 minutes. I often checked the time during this film which is something I NEVER do. Ok, so I didn’t come into this movie expecting a good story, but I sure as hell didn’t expect to be bored. 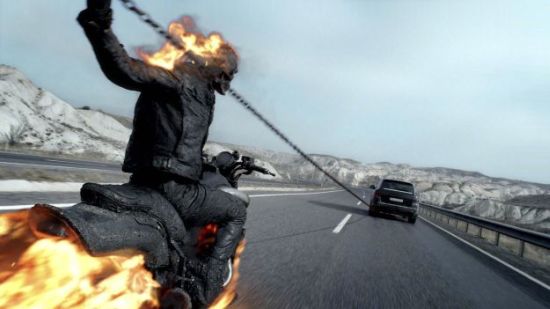 The most redeeming aspect of this film is having Nicolas Cage in it for sure! I make it no secret that I absolutely love Cage’s work and he does not disappoint here for sure. You can check out my “In Defense of” article about Mr. Cage right HERE. I even commend him for his commitment to the character in the original GHOST RIDER film. That said, he was very fun to watch here and there were a ton of “Cage” moments that people will likely make fun of all over the Internet. Say what you will about Cage, but the man is entertaining and is one of the most fun and eccentric actors out there. A role such as this is the perfect playground for him to just have fun and you can defiantly tell he had a blast making this movie. I just wish I could say the same thing about the rest of the cast.

Besides Cage as Blaze, there is a kid (Fergus Riordan; I WANT TO BE A SOLDIER) involved who possesses evil powers, his protective mother (Violante Placido; THE AMERICAN), and even a wine gurgling French man to help Blaze throughout his journey played by one of my favorite up and coming actors Idris Elba (THE LOSERS). On the bad side of things, there is the devil himself (Ciaran Hinds; HBO’s ROME) who is accompanied by his many minions and his right hand man of sorts (Johnny Whitworth; EMPIRE RECORDS) who has the power of decay. Neat? Actually, my main gripe is with Whitworth who gives the kind of craptacular performance that killed Christian Slater’s career. If there is such a thing as the poor mans Slater, its Whitworth. I don’t think he is a bad actor overall, this role was just not for him. The script was chock full of bad one liners and meaningless dialogue. Some find that sort of thing fun in a movie. It is worth noting that this film is responsible for one of the biggest letdowns in nerd film history. Let me explain. A few months ago I saw that Christopher “fucking Highlander” Lambert had a role in this film. I have been waiting patiently for someone to cast this man is a substantial role. Hell, I would even take a kick ass cameo or something. His role here as a bald tattooed cult priest sounds cool on paper, but it was just crap. He can do way better than that and dammit, he deserves better. Somebody please give this guy a sweet cameo or roll! 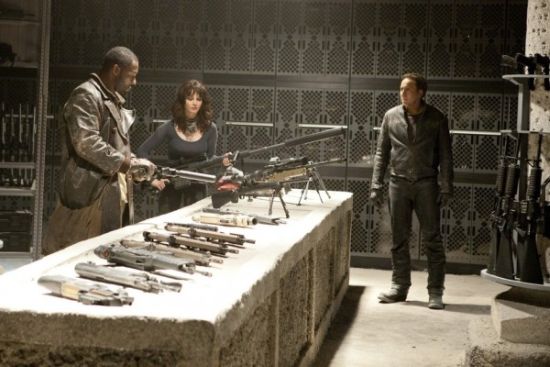 Alright, I feel like I’ve been ranting about stuff I already knew was not going to be that good. I came here for the pure action that the sweet ass trailer promised. I’m suppose to just let go a bit and have fun, I get it. The problem is that I was so bored at times just waiting for something bad ass to actually happen. So let me tell you a few things I do like to counter balance all my bitching. Ghost Rider is an awesome character. He looks cool, sounds cool, and is one hell of a bad ass. The Ghost Rider in this film is 100 times more bad ass and cool looking than in the previous film. I would go as far as saying that this is the coolest I’ve ever seen the character, even in the comics. In this film he is more of a demon/monster, his jacket bubbles from heat, his skull is burnt, his chain weapon owns, and his flames actually look real. Screenshots of this dude are stunning. Mix that with his human form being Nicolas Cage and you have one sweet character. I will also admit that there are a handful of action sequences that are stunning and will have fans beaming with joy. I especially loved the last 20 minutes or so that mainly took place on the road. Very cool stuff. My main gripe with the action is that it is way too toned down. We are dealing with an uncontrollable demon from hell and the devil himself. They are pretty tame and at most we get to see people quickly burn to a crisp. It’s cool and all, but just not as cool as something this franchise could deliver with a hard R rating. If any movie could strive with an R rating, it’s one like this. So ya, some of the action sequences and imagery redeem this film a bit and make it campy fun. 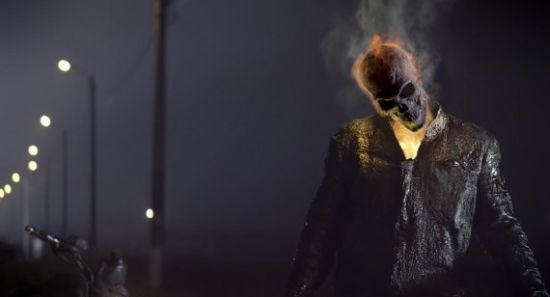 Maybe I’m being too harsh here. Maybe my inner nerd built up the hype too much due to the sweet trailer. Most of the best scenes can be seen in that trailer which is probably why the overall package was such a let down. But in the end, there is really no excuse for how boring this film was at times or the crappish performances by some of the actors. Sure the action was cool at times and some of the imagery was totally bad ass, but I’m afraid to say it was not enough to make me a big fan of this movie. I would LOVE to see a directors cut of this film with an R or UNRATED rating on Blu-Ray. If so, I will defiantly revisit this one and give it another chance especially since my inner nerd hype for the film has died down. Over time, I can see GHOST RIDER: SPIRIT OF VENGEANCE becoming a guilty pleasure. I am a huge fanatic of the Marvel film franchise, I love the character of Ghost Rider, and have complete respect for Nicolas Cage. If you don’t agree with any of those things, I really have a hard time recommending this one.