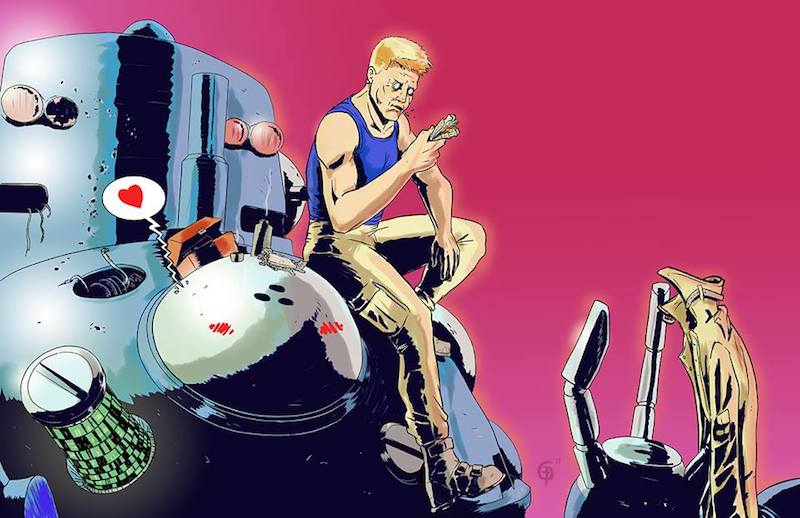 GHOST IN THE SHELL is one of the most popular anime franchises of all time, with multiple animated features, mini series, television shows, and comics making up its vast history, so it was only a matter of time before a live action version was made.  While the film features the main characters from the franchise, it is not based on any lone previous work, rather it is an amalgamation of several plot points from the series combined to create a stand alone story.  It centers around the Major, a woman whose human brain was placed inside a completely cybernetic body after she survived a devastating terrorist attack that claimed the life of her parents.  She was folded into Section 9, an elite cyber-crime task force, and spends her days dismantling criminals with frightening efficiency.  However, her latest target may not be all he seems, and as their paths continue to collide her very reality and concept of self will be brought into question.

Warning: this paragraph has major spoilers!

The elephant in the room of this film are the claims of white washing that have surrounded it.  Now putting aside the fact that the creator of the franchise was fine with the casting and that the Major has always been a cyborg and the story focus has been on that rather than race, I can understand why people could be annoyed with the casting of westerners in a Japanese franchise.  I thought this would just be a tempest in a tea pot until I saw the film, because while the movie isn’t what I would call intentionally racist, the story they went with can easily be viewed that way.  The company that made the Major kidnapped rebellious Japanese runaways and experimented on them to perfect the process of which the Major is the final result.  The issue is that both victims of this process that we see with cybernetic bodies are obviously white and are repeatedly referred to as perfect or superior.  From a technological standpoint point it plays well, from a racial one it is a major faux pas that someone should’ve caught.

Beyond that point the story has some other issues.  The pacing is pretty spastic and I was constantly disengaging until the third act when it finally hit a steady stride that kept my attention.  The story overall did have a coherent narrative that was pretty satisfying by the end of the film and provided a solid basis for delivering a lot of references that long time fans will surely enjoy.  Also, the characters were all handled well and came off unique, even if they only had small parts, which was a refreshing change of pace as I often find those smaller roles forgettable.

Perhaps the best feature of GHOST IN THE SHELL were stunning visuals.  The movie takes place in a future where technological integration is practically ubiquitous throughout all levels of human society, and this was illustrated by cityscapes littered with holographic ads, hi tech vehicles, and cybernetic altered humans, which when combined creates the kind of cyberpunk atmosphere long time fans have come to expect from the franchise.  They also had impressive visualization of the hacking and visual enhancements being used by the brains of the cybernetic humans, such as x-ray vision, visual glitches, and fracturing visuals as a hack went wrong.  The action sequences were everything you could want from a cyberpunk film, featuring unusual angles, cool gun play, and intense hand to hand combat sequences that came hard and fast but were still easy to follow.  Given the fact that this is only the second full length film that director Rupert Sanders (SNOW WHITE AND THE HUNTSMAN) has helmed, it is a relatively impressive piece of work and I look forward to seeing his next project.

Whether or not you approve of the casting choices, the movie boasts some impressive performances across the board.  Scarlett Johansson (CAPTAIN AMERICA: CIVIL WAR) takes on the part of the Major, and she does a nice job with the character.  The Major is someone who has far more going on inside her head than she will ever show on the surface, and Johansson portrays this quite well, giving her the right level of detachment and emotion to bring this constantly questioning character to life in live action.  Taking on the part of Batou, the Major’s partner, is Pilou Asbaek (BEN-HUR) and he does a solid job with the role.  Batou is a tough guy with a fierce loyalty streak and a surprising sense of compassion, and Asbaek embodies this role almost effortlessly, giving us a gruff yet endearing character that is easy to relate to.  Legendary Japanese actor “Beat” Takeshi Kitano (OUTRAGE) takes on the role of Aramaki, the head of Section 9, and he is a scene stealer.  Aramaki is unassuming in appearance and demeanor, but will destroy you without blinking if you are a threat to him or his team, and Takeshi embodies this as his portrayal evolves with the story, going from subtle and reserved to remorseless executioner, and if you’re anything like me you will love every minute he is on screen.  Juliette Binoche (GODZILLA) plays Dr Ouelet, the Major’s chief technician, and does a nice job with the role.  Ouelet is a woman dedicated to her work who thinks the ends justify the means, at least until things get personal, and Binoche easily portrays her varied range in the film, delivering a believable performance that feels quite personal.  Lastly, Michael Carmen Pitt (BOARDWALK EMPIRE) steps into the role of Kuze, the hacker that Section 9 is trying to catch.  Pitt delivers a powerful performance of a man wronged who is out for not only revenge, but answers, giving us all the rage, hurt, and cunning of a man who will not be denied the answers he so desperately covets.

GHOST IN THE SHELL is a visual treat that suffers from some issues that may or may not sour it for the viewer.  The pacing doesn’t work for the first two thirds of the film, and the story has some dubious overtones that can be seen as offensive.  However, the action is solid, the story makes sense, and the cyberpunk world is everything fans could want.  If you have any interest in the franchise or the actors, than this movie is probably worth your time, and it is certainly best enjoyed on the big screen.