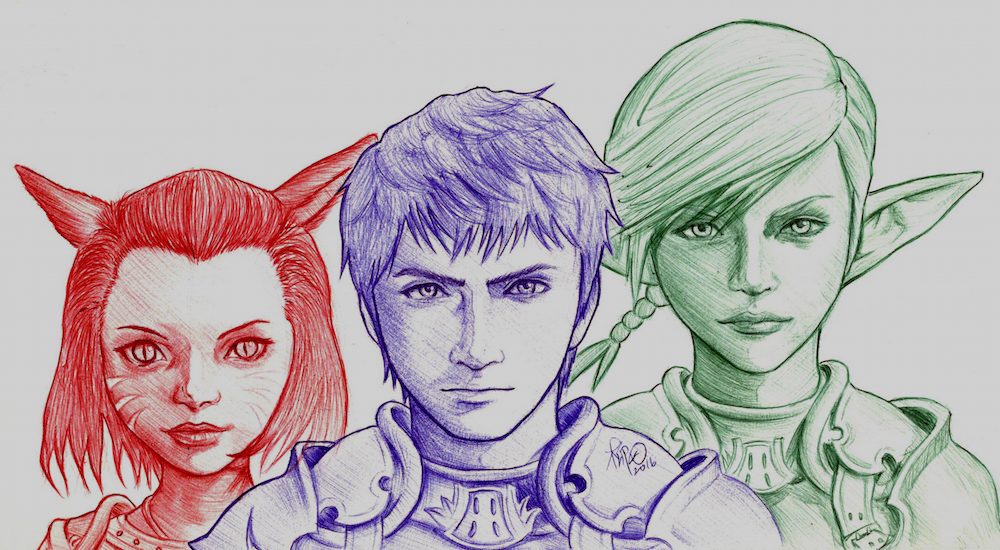 I can assuredly say that I have never heard of a company releasing a game of such poor quality before pulling a complete reversal to rerelease it as one of the best games in its genre. It seems absurd quite frankly. When FINAL FANTASY XIV originally released on PC, it was an absolute nightmare. Overly complicated combat, dull, repetitive environments throughout, and a development that sounds like utter hell; all of these are things associated with the original FINAL FANTASY XIV. “A REALM REBORN” has none of these issues. It is a shining example of how to take a bad situation and make it into a good one. Square-Enix’s rerelease of FINAL FANTASY XIV proved to be one of their best moves in years, giving us one of the most fun MMO’s of all time.

I’ve played my share of MMO’s. I’ve grinded beyond the point of fun on many occasions. I played FINAL FANTASY XI as a Thief, which is, quite frankly, one of the worst decisions you can make in that game. I know my way around that scape and I know it’s generally popular because you get to take part in a massive world inhabited by other real people and play together. That’s the draw of MMO’s. For me, that isn’t the main reason to love A REALM REBORN. Trust me, all of that stuff is there in full force, but the story has been the main draw the entire time.

I can’t say I’ve ever played an MMO and enjoyed the story the way I have with A REALM REBORN. There were some fun moments in WORLD OF WARCRAFT but beyond that, its always felt like an afterthought to me. A REALM REBORN gives you a completely competent, easy to understand and genuinely fun story. The game takes place five years after Meteor fell and either destroyed or drastically altered the environments of the world. You are an adventurer looking to stake your claim on the lands of Eorzea. Early in your adventure, you learn that you may be more than just an average adventurer however, and you answer directly to the crystal deity which all good people of Eorzea worship. The game takes you through a sprawling tale of political unrest, warring nations and evils hiding behind the scenes. Over the 100 plus hours I put into the game, it absolutely remained interesting throughout, and actually gains traction over time.

A REALM REBORN does a lot of things right for FINAL FANTASY fans. It makes sure we know we’re playing a FINAL FANTASY game first and foremost. There are references to classic FINAL FANTASY games all over the world. Moogles and Chocobos are in no short supply. Cid features heavily in the game’s main story. You can affix Materia to your weapons to increase their abilities. These references never seem ham-handed, and only serve to increase your enjoyment of the entire experience honestly. Square-Enix realize what they did wrong with the original release of this game and have gone out of their way to make sure this is the online FINAL FANTASY game that people want to play.

Visually, A REALM REBORN is definitely impressive. Among MMO’s, this is definitely the best looking I’ve ever played. The entire world is densely populated with creatures or foliage and nearly all of the environments stand out and are diverse. Particle effects nice and help a lot during bigger boss fights that require players to keep a close eye on the environment. Character models are very impressive, with the level of customization when you start the game being fairly high. I was able to make a character that looks slightly different than any other character I’ve seen so far. They all feature fairly expressive faces, though cutscenes that are not voiced suffer from the effect seen in KINGDOM HEARTS and FINAL FANTASY X where faces appear stilted. This hardly affects one’s enjoyment of the game, though it does make the unvoiced cutscenes slightly less interesting after you’ve been playing for so long. In the end it doesn’t matter all that much. A REALM REBORN has a unique style that draws you in regardless.

Your time in game will be split into segments. From levels 1-20 you’ll be mostly soloing story content with little variety to mix things up. This gives players a chance to get accustomed to the combat system before diving in with more experienced players. From levels 20-40 you’ll be in the heart of the story and really get into the meat of the experience. You’ll be facing off against Primals, classic FINAL FANTASY summons, with other players and learning the intricacies of partying and your role in the party. From levels 40-50 you’ll be doing endgame content. You’ll start joining raid parties of eight players, which can be intimidating at first, but becomes a blast when you realize you aren’t being relied upon quite as much as can just enjoy the experience. It is very disappointing however when a cutscene comes up and your party expects you to skip it and watch it later. For those interested in the story, expect to either miss out on a few cutscenes during the last raid or a few boss battles. You can always go back and watch those cutscenes in the Inn’s though.

The combat in A REALM REBORN is nothing revolutionary but it works incredibly well. It features a hotbar for your character abilities and you cycle between them appropriately in battle. This works exceedingly well on a controller, with the left half of your hotbar linked to holding down L2 and the directional buttons, and the right half linked to holding down R2 and the other buttons. It really does keep boredom down during long boss battles because you’ll be moving your hands in creative ways to keep chaining appropriate abilities together. You’ll continually unlock new abilities as you level up as well as when you reach certain story milestones for the class and job you choose.

Being a FINAL FANTASY game, there are many classes and jobs that your character can choose from in A REALM REBORN. Typically in MMO’s, when you start the game you choose your class and from there you’re locked into that role unless you want to create a new character which might cost more money. In A REALM REBORN, your character can change their class and job at any time from the menu once you’ve spoken to someone at the class’s appropriate guild or when you’ve reached certain level milestones for two particular classes where jobs are concerned. This lets players decide whether they like a new class or job without having to commit to those roles in any way which is a very nice idea.

As always, the soundtrack in A REALM REBORN is absolutely fantastic. It is top tier FINAL FANTASY music that will be stuck in your head for days on end. I particularly love the music that plays before you even start the game. I could sit at the login screen for hours, listening to the music play in the background. The voice acting is all pretty well done and when it’s pulled out for cutscenes it’s apparent that more work has been put into them. I can’t speak highly enough of the soundtrack and sound design in A REALM REBORN. This is a soundtrack I want to buy immediately.

In conclusion, FINAL FANTASY XIV: A REALM REBORN is the FINAL FANTASY experience I have been clamoring after for years now. The story is genuinely interesting and keeps the entire experience feeling fresh compared to other MMO’s on the market. There’s no end in sight for the story either, with the HEAVENSWARD expansion recently releasing and continuing the adventures of your character into new lands. The gameplay is easy to learn and tight enough that there are never any issues in battle and the soundtrack caps it all off to make for an unforgettable experience for both MMO fans and FINAL FANTASY fans. I cannot recommend this game enough. FINAL FANTASY XIV: A REALM REBORN is the best FINAL FANTASY game that Square-Enix has released in years.