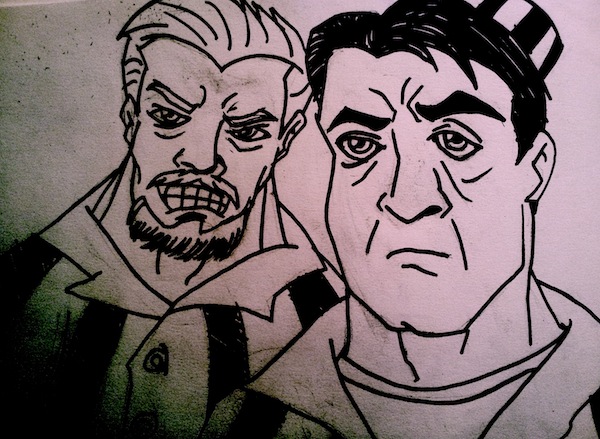 In only the past few years, we have been offered glimpses at what old school action movie buffs have been waiting two decades for: the Hollywood heroes of our youth joining forces for wanton destruction and high adventure.  And for a while, the snarky scenes of banter and brief gun battles between action superstars Bruce Willis, Arnold Schwarzenegger and Sylvester Stallone sprinkled throughout 2010’s THE EXPENDABLES and its 2012 sequel seemed to be about as close as we were ever going to get to a legitimate team-up.  That is, until director Mikael Hafstrom (THE RITE) brought 2 out of those 3 afore-mentioned titans together to co-star in ESCAPE PLAN.  Having Stallone and Schwarzenegger battling bad guys for a full hour and forty minutes?  Sounds like a dream come true for the action elite.  But is it too little too late?  Well…the movie may not be the absolute perfect project we wanted to see these fellas collaborate in, but it hits all the necessary marks to be enjoyable for fans of the Italian Stallion and the former Governator.

Stallone plays Ray Breslin, a security systems expert who has made a career of breaking out of prisons to point out the weaknesses in the layouts, routines and staffing to their administrators.  All that changes when he takes an assignment to test out a new privately-funded, and (allegedly) inescapable, facility codenamed “the Tomb.”  It becomes more than he bargained for as he soon realizes that he has been set up and placed in the sadistic hands of the Tomb’s Warden Hobbs (Jim Caviezel, THE PASSION OF THE CHRIST).  In order to get out alive, Breslin finds himself joined by an unusual ally: prison inmate Emil Rottmayer (Schwarzenegger).

This plot may reek of familiarity and, frankly, may be a bit pedestrian for the likes of its two co-stars.  Thankfully, much like 2 GUNS, it’s the character interactions and exaggerated tropes of the action film genre that kept me invested.  Sure, Stallone’s Breslin is the same gruff and terse protagonist we have come to expect from him in his most recent outings, but he does convey a sense levity and fun with the role.  As much fun as it is to watch him pummel bad guys into submission, it is equally interesting to hear him explain the methodology for executing the perfect prison break.  Ray is always studying his environment and captors, always analyzing and adapting his strategies for maximum effect and turning any object he can get his hands on into a weapon or tool.  Basically, he’s the equivalent of ten MacGyvers rolled into one guy, tapping into the aesthetic of “so outrageously over-the-top, it’s entertaining.”

The supporting cast is also interesting to watch in their respective roles, even though we have seen these archetypes many times before.  Caviezel is playing your stereotypical corrupt leader, but appears to be enjoying himself by portraying Warden Hobbs as cold and unfathomably cruel, yet also as a bit of a detached neat-freak and perfectionist.  His head of security Drake, played by Vinnie Jones (X-MEN: THE LAST STAND), is equally flamboyant in his evilness, but it’s just too much fun to see his skull almost pop out of his face when he’s imposing brutality on his prisoners.  Amy Ryan (THE OFFICE) is very likable as Ray’s faithful and flirtatious right-hand woman Abigail Ross.  Sam Neill (JURASSIC PARK) conveys the right amount of conflicting moralities and allegiances in his role as the Tomb’s head physician Dr. Emil Kyrie.  And despite playing the same type of slimy and conniving character that he’s typically known for, Vincent D’Onofrio (SINISTER) is entertaining as Breslin’s business partner Lester Clark.  The only unappealing performance I really found in the movie came from rapper Curtis “50 Cent” Jackson as Breslin’s tech guru Hush, but even then it’s mostly because his character isn’t given much to do besides spout off some exposition and act pissed. 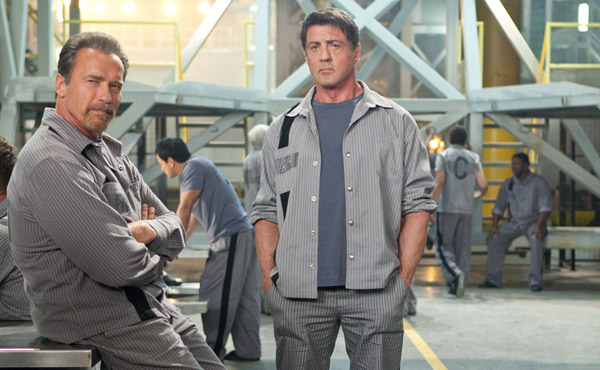 On the flip side, Schwarzenegger as Rottmayer steals the show.  And I’m not just saying that because it’s Arnold and he’s given opportunities for “so bad, they’re good” one-liners and the chance snarl at the camera.  He’s given moments to demonstrate some actual range beyond his usual action film hamminess.  One scene involving Emil in solitary confinement relies heavily on his performance to hold both our attention and the attention of the villains and it is very convincing.  This is definitely one of Arnold’s most reserved performances, but it is strikingly effective.  And the dynamic he shares with Stallone displays the appropriate amount of tension regarding trust, but also a sense of good-natured ribbing.

The action is also adept at convincing us of its brutal nature.  Despite their age, Stallone and Schwarzenegger are still in good enough shape to sell us on their toughness in a fight.  Blood runs like a river throughout the film, torture scenes are uncomfortable to watch and when bad guys get their comeuppance, holy God is it extravagant!  The plot may be standard with regards to its pacing, but at no point does it forget that it is supposed to be entertaining.

While being a fun enough romp, I will admit that the scope of the story of ESCAPE PLAN seems a little small for the likes of these two larger-than-life heroes fully teaming-up for the first time.  Thankfully, that doesn’t stop Stallone, Schwarzenegger and their supporting players from giving it their all.  There really appears to be a sense of enthusiasm and excitement for material that really isn’t thoroughly deserving of it.  Sure, the plot twists and cliched banter expected from such a heavily entrenched genre film are telegraphed throughout, but the likability of the leads keeps you engaged.  If you are more of casual fan of these types of action films, this may be one to wait for to rent.  However, if you are a die-hard (sorry, Willis!) Stallone or Schwarzenegger fan and are curious to see what their first full collaboration looks like, I would say that this is worth the price of admission.