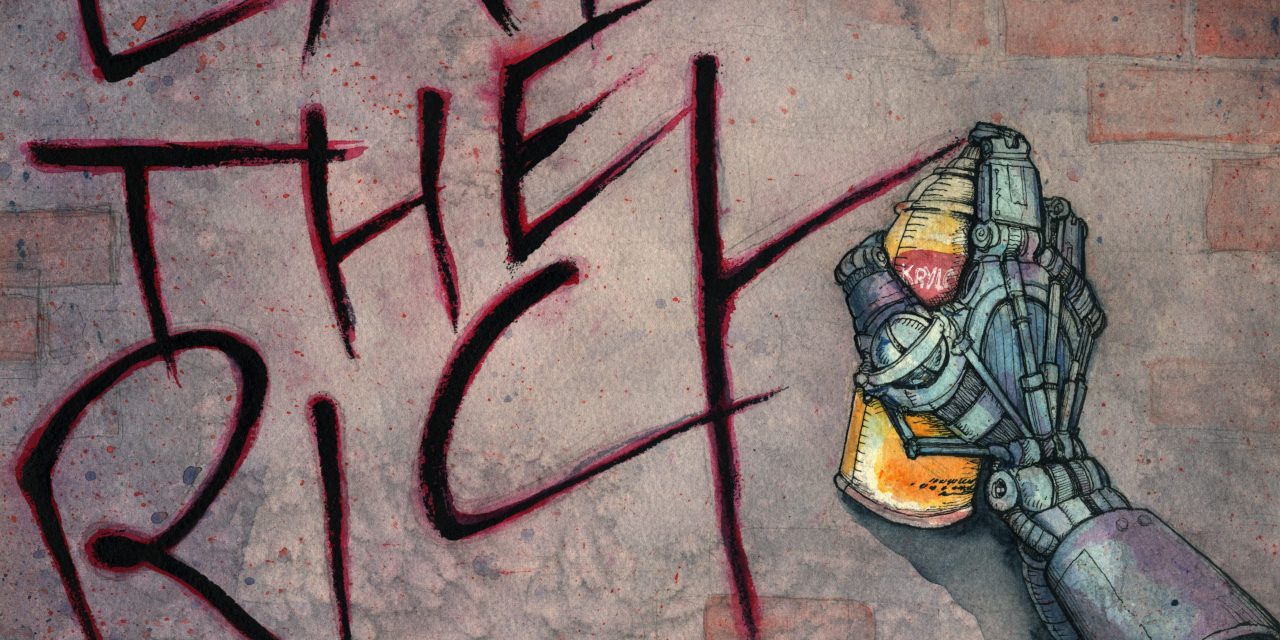 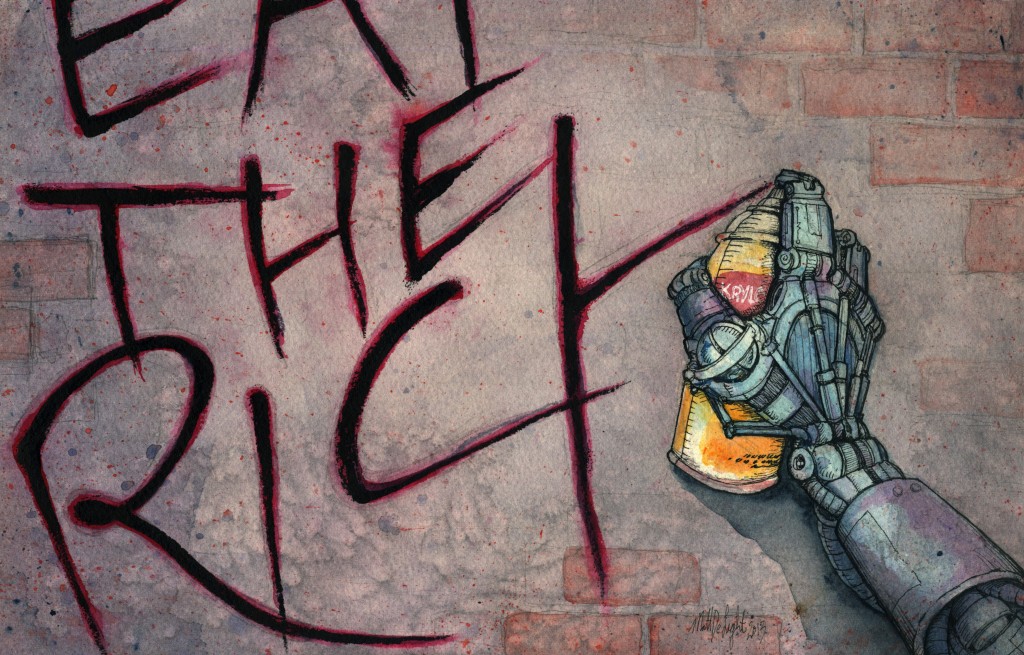 If you tell me that ‘ELYSIUM is like every other sci-fi action flick that has come out in the past few years,’ I will immediately lose interest in you. I will smile that smile that I do when I obviously do not want to be smiling.  I will hold it up in the air for a few seconds longer than I should. I will throw my eyebrows up as high as they can go and then spit out a melting ice cube at a near by tomcat. Then I’ll probably just walk away or something..  I don’t know.

I spent most of this year endlessly obsessing over every movie that was going to be coming out this summer. I went into this season, with a clear idea of what movies were going to be on top of my list. I would have never believed that WORLD WAR Z was going to be one of my favorites. If  you would have tried to convince me of that, I would have dug up your great great great grandmomma and taught her how to tap dance.  If you would have told me that I was going to suck my teeth 13 times during PACIFIC RIM, I would have traveled back in time and made your daddy fail his driver’s test.  I have never felt so old as when I tell people that I thought there was too much destruction and damage in MAN OF STEEL. ‘Ohhhh. Did they really have to blow up so many buildings?’ Maybe I went in with too many preconceived notions? Too high of expectations? As we sauntered casually into August and into the end of the ‘blockbuster season,’ I found myself really hoping ELYSIUM wouldn’t let me down.. It didn’t.

I saw it and was almost immediately compelled to look at other website’s reviews of it.  This was wrong of me.

I sat there at my computer and wondered if I should even be writing movie reviews? Do my expectations influence my ability to be an unbiased observer? My feelings on ELYSIUM feel so drastically different than that of the jaded pop cultural hive mind that seems to be so content on shit housing all over this movie. I feel like I’m missing out on some inside joke? Is there a penis drawn on my face?  Seriously? You would tell me if there was? Right? 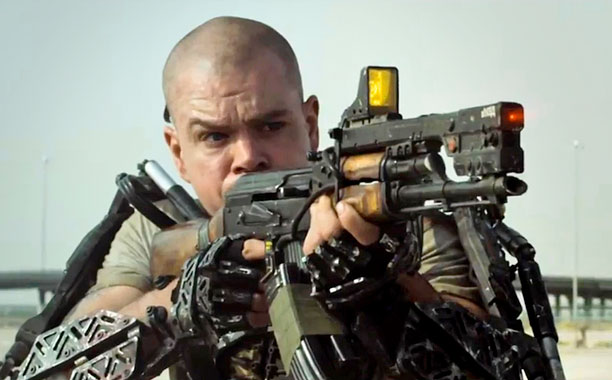 ELYSIUM takes places about 140 years from now. Earth is pretty much all kinds of screwed up. Because of over-population and hella crazy pollution, the rich and privileged have decided to abandon Earth and relocate to a spacious space station orbiting the outer rim of our planet. The cozy 1% are sitting pretty while the remaining 99% of Earth’s population slowly die off due to lack of resources and a generally ‘nothing we do matters’ sense of mortality.  While Elysium thrives politically and technologically, with access to medical beds that cure any and all human aliments; the people of Earth make the best of medical facilities that seem vaguely reminiscent to civil war barracks.  We are introduced to this world through the eyes of Max, played by Matt Damon (GOOD WILL HUNTING), a reformed car thief who attempts to exist in this system that is so clearly set up to keep all ‘undesirables’ in their place. For Max, the dream of living on Elysium is one that will never be fulfilled. After being dosed with lethal levels of radiation, Max is left with no other options but to sign up with a criminal element and hopefully break his way into Elysium and cure himself. The borders of Elysium are protected by Jodi Foster (CONTACT) who seems more content to simply destroy ships seeking sanctuary, then the burden of rounding the refugees up and deporting them back to Earth. Realizing that her way is the way that will ensure lasting protection and safety for Elysium, she attempts to insert a code that will reboot the space station and then allow her to remove certain people from the system and place herself in charge. Naturally, this code falls into the hands of Max.  Inter-lapping agendas coincide which result in Max engaging in a final confrontation  that could topple Elysium and finally bring salvation to the people of Earth.

I want you to watch this. It’s one of director Neill Blomkamp’s earlier films. This is the world he grew up in.

I want you to remember that Neill Blomkamp grew up in South Africa. I want you to understand that in Johannesburg, there is a clear cultural divide between the poor and the rich. Thousands of poor people are forbidden from living in the  metropolitan area and are forced to live in baron ghettos outside of the city lines. ELYSIUM and DISTRICT 9 may seem like standard by-the-numbers action films that are trying to tell an all too familiar story, but in actuality, they are probably some of the more accurate tragic predictions of the path our world is taking.  It’s easy to write off ELYSIUM when you’ve grown up in our privileged America.  How difficult it can be to remove the blinders that force you to only see the redundant cinema troupes on display and keep you from actually seeing that ELYSIUM comes from the mind of a brilliant film maker with experiences that make him more qualified to tell this type of story. In interviews, it is clear that Blomkamp is shocked by how jaded American audiences have become. So much so that we seem to not want to be bothered by yet another story of how some people have it so badly, while a small select group have it so well.  You can’t say that he didn’t try to warn us.

her accent.
‘white people.’
predictable?!
Why is medicine so good on Elysium and so bad on Earth?
a normal day is dystopia
Future tech with present day feel.

I’m keeping those loose notes in. Screw it. I’m going to give you a quick look behind the curtain. When I write movie reviews, I generally work off of an outline. I write out key points that I want to touch upon and so on and so forth. You’ve been to college. You know what I’m talking about.  Anyway, I’m keeping those bullet points in because if you’ve already read any other review of ELYSIUM, you’ve probably already been privy to a complete and total inability to grasp the obvious and intentional creative decisions on the part of Neill Blomkamp.  This movie has some of the best visuals I have ever seen. The set designs deserve an Oscar. The CGI is flawless. The acting is top shelf.  And yes, the story is just as good.

A big point that people are missing about ELYSIUM is that the social divide between Elysium and Earth has been as such for, at least, 100 years. Elysium was fully built when Max was a child. Which means that technology and innovation have gone unchecked for years. The rich hoarded brilliant young minds. Allowed them to thrive.  And then kept the fruits of their labor for themselves. Earth medicine didn’t evolve, because it didn’t have the tools necessary to do so.  Would the push of a button instantly fix the problems of the world.  In a system designed to serve only within itself, yes.. It would be as simple as a push of a button to change everything. 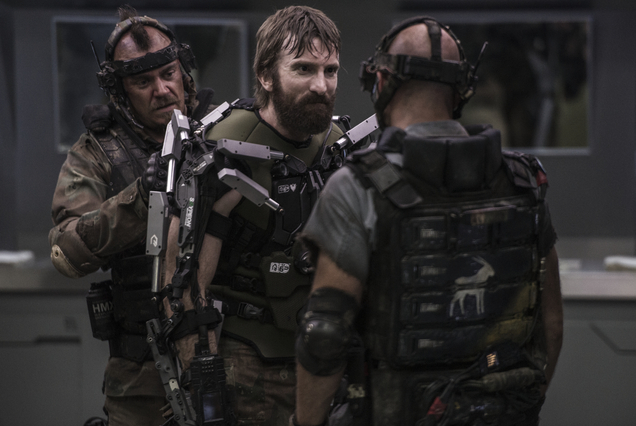 Is the plot to ELYSIUM predictable?  At times, yes, it can be. Does this make it a bad movie?  No, not at all. You can see the tracks that this movie is riding, but the scenery is well worth the ride. I am convinced that Blomkamp convenes a council of technicians and fashion designers and has them predict 100 technological advancements and fashions styles of the future.  You may only notice 80% of them, but the ones that you do will make you wish you could rewind and see what you’re missing. (I need a bad ass facial scar tattoo.) The tiny design elements he includes to humanize future Earth are spot on.  The medical advancements on Elysium seem far to futuristic, until you remember what our world looked like 145 years ago. The look of Elysium is breath taking and every room on it is exquisitely designed. I love Jodi Foster’s accent.  The elitist language that seems to be a slight combination of many accents. The language of the rich and privileged. I loved the accents of Elysium as much as I loved the fact that everyone in Los Angeles spoke Spanish. I do feel that the movie wrapped up pretty quickly in the last 30 minutes, but, events with such ramifications often take place over a short period of time. Elysium was an empire destined to fall and fall it does. Or does it?  You can’t really say that the ending won’t be nothing more but a minor set back. Especially, because the people of Elysium don’t really learn a lesson. They don’t see how shitty they’ve been and change.  They are forced to change.  Shartlo Copley (DISTRICT 9) as the assassin Kruger may be one of the biggest masterpieces of this movie.  He is brilliant and homicidal and makes you squirm in your seat. You want to watch more of him and feel completely guilty about it. Matt Damon is clearly stepping out of his character safe house and doesn’t miss a step.  Everything in this movie feels right. What more can you ask for?