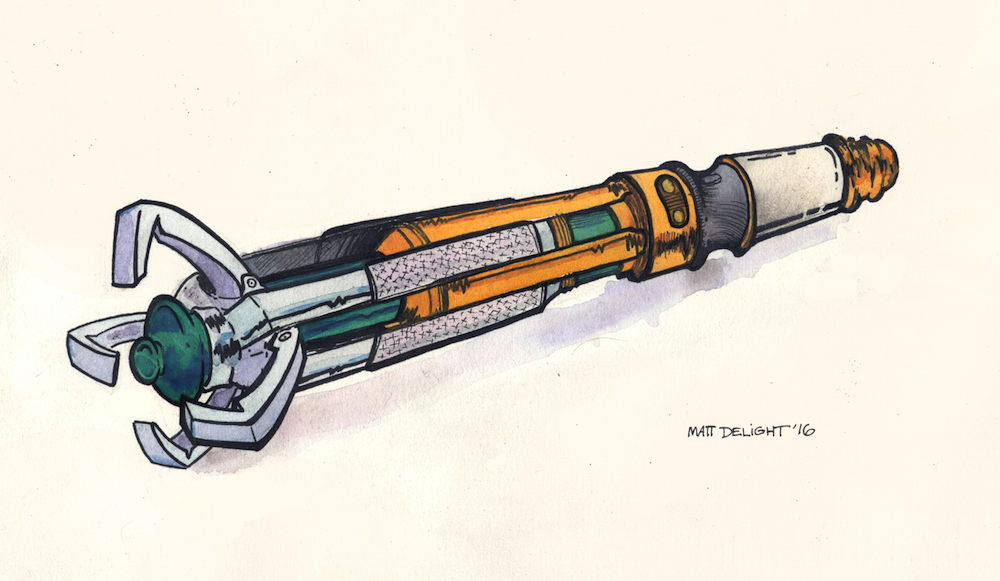 Warning: Spoilers Ahead!!  Also, this review will also cover the christmas special, you have been warned!

The ninth season of DOCTOR WHO has come to an end, and it has been full of the twists and turns that fans of the show adore.  The season opens with more mischief from Missy, which will bring The Doctor face to face with one of his most notorious foes, however, this blockbuster opening is just the start of the fun, as we are treated to a smoargasboard of Who favorites this season.  Zygons, The Mire, a new recurring immortal, Weeping Angels, Cybermen, new sonic weapons, a trip home to Gallifrey, and an appearance by River Song are just some of the wonderful things that make this a banner year. Despite all these heavy hitters and the monumental events that surround them, the show still manages to feel quite personal and engaging as it flawlessly delivers the pathos that has made this show such an international phenomenon.

One of the reasons fans keep coming back for more Doctor Who is the excellent writing and storytelling.  Even though the main protagonist is always the same character, we constantly get new versions of him due to regenerations which allows for tone and personality changes to be utilized by the writing team.  This season’s stories played to the 12th Doctor’s more prickly demeanor and used that to subtly bring up morality concerning life and death decisions.  From the start to the finish, nearly every episode this season sees The Doctor facing moral questions surrounding death, and while some choices are obvious, such as saving London from indiscriminate annihilation, some are less so.  When The Doctor saves Ashildr, later to be called Me, the effects are far reaching because a side effect of the technology used to save her makes her nearly immortal, and as she pops up throughout the season the trail of bodies she has left in her wake raises some very big questions as to whether what The Doctor did was, in fact, right.  These kinds of moral questions are brought up again and again throughout the season, spanning from an encounter with Devros, to a torture chamber, and peaking with the death of Clara Oswald.  What makes this so brilliant is that The Doctor clearly has some internal struggles going on and is trying to make the best decisions he can at the time, but the show doesn’t pass any harsh judgments on him, rather it lets the audience ponder these moral conundrums themselves, allowing us to connect and engage with the show on a real emotional and intellectual level.

I have watched a great deal of science fiction television throughout my life, and rubber monsters and mediocre effects seem to be their hallmark, however, DOCTOR WHO feels different for some reason.  For one, the visual effects surrounding the Tardis, how it maneuvers through space and time and the way it appears and disappears, are pretty well done and look passably realistic.  Another difference is that while there are rubber monsters on occasion, more often than not the antagonists are humanoid who are created using practical make-up effects or are some sort of armored being, which do tend to come off looking better than a rubber monster, giving the show a visual edge over run of the mill science fiction shows.  Another wonderful production value of the show are the fantastic costumes.  Since the Tardis can go anywhere in space and time, there are obviously going to be a great deal of period costumes and creative alien clothing to dream up, and I am always impressed by how on point the production team is with this.  Whether it is a viking village, a black tie cruise for mass murderers, or a futuristic underwater facility, the costumes always look perfectly appropriate, though maybe not completely historically accurate, which adds to the audience’s ability to suspend their belief and enjoy the ride.

Another highlight of this season of Doctor Who were the charismatic performances.  Peter Capaldi (WORLD WAR Z) has truly hit his stride as The Doctor, delivering a nuanced performance that capture the hidden depths of the Time Lord.  As I mentioned earlier there are many moral questions at the center this season which gave Capaldi plenty to work with and he flawlessly runs the gamut from wisecracking, happy traveler, to angry, vengeful warrior.  Whatever the tone of the episode, Capaldi manages to own the screen and he kept my rapt attention throughout the season.  Returning as Clara Oswald, The Doctor’s companion, is Jenna Coleman (CAPTAIN AMERICA: THE FIRST AVENGER) and she gives us a few surprises this season.  Clara has always been a bit more eager and confident than most companions, and it was a treat to see her stretch her acting muscles as Clara was forced to face not only an angel of death, but the prospect of The Doctor destroying the Universe in an attempt to save her.  Coleman rose to the occasion, delivering a solid performance full of sincerity and passion that kept the human aspect of the show all too real and raw.  A pleasant surprise this season was Maisie Williams (HBO’s GAME OF THRONES) who took on the role of Ashildr, later called Me, who is a new immortal, thanks to some help from The Doctor.  Everytime Me pops up she is at a different point in time and has a different agenda, and Williams nails her every time.  From a brave girl in danger, to a ruthless thief, and even as a steward of Aliens stuck on Earth, she embodies each incarnation with ease, giving us a dynamic character that is sure to become a fan favorite.  There were a couple other notable appearances this season, namely Michelle Gomez (TV’s GOTHAM) as Missy and Alex Kingston (TV’s ARROW) as River Song.  They’re both fun surprises and they still nail their roles, so keep an eye out for them.

The ninth season of DOCTOR WHO sees the 12th Doctor come into his own but beyond that it is full of powerful moral questions, boasts some wonderful production values, and has some of the best performances of the entire series.  If you’re a fan that’s drifted away because of the new Doctor, come back, because you are missing some of the most fun and powerful science fiction television out there today.