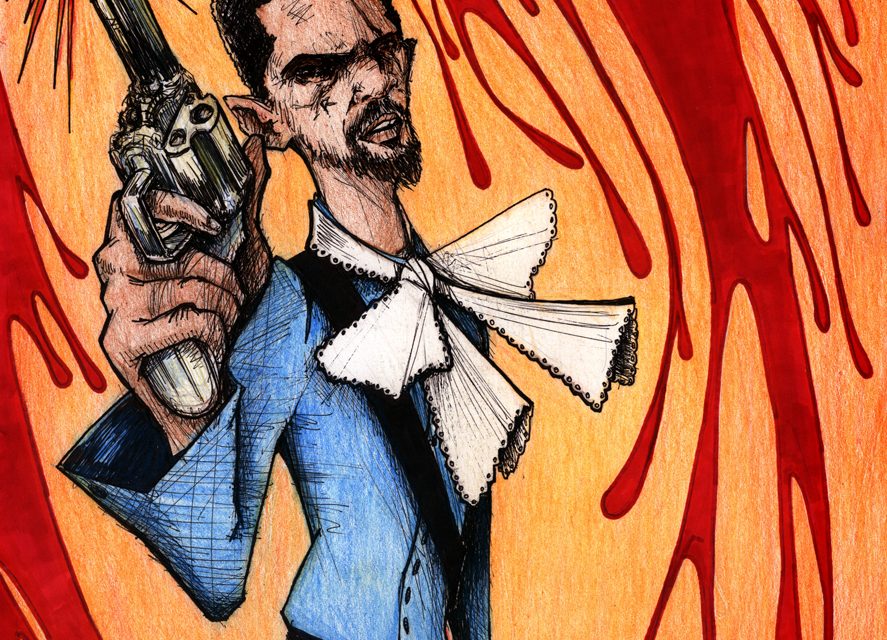 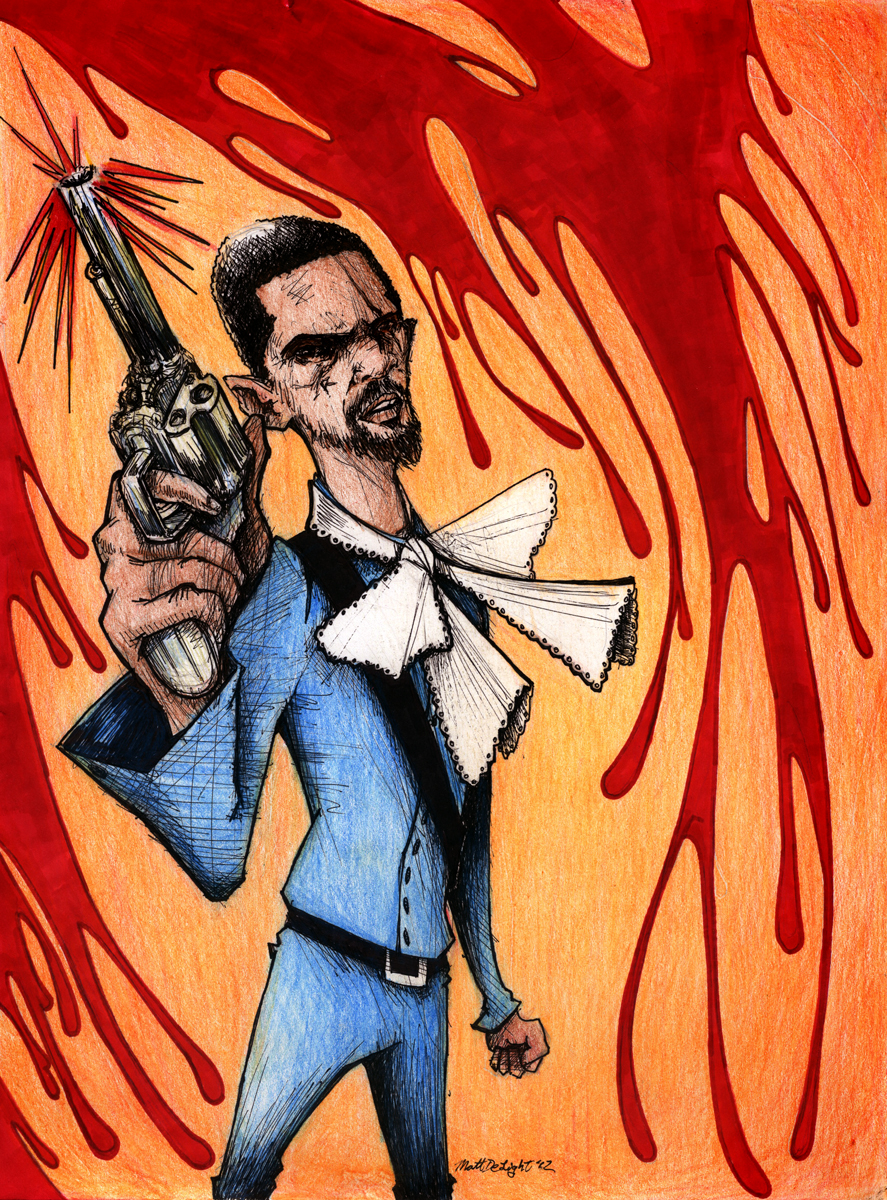 Quentin Tarantino’s (INGLORIOUS BASTERDS) latest offering is DJANGO UNCHAINED and fans of the writer/director will not be disappointed. The film takes place in the southern United States of America shortly before the Civil War and it centers on Django, a slave who has a very interesting change of fortune. Django is sought out by Dr. King Schultz, a bounty hunter who prefers to claim his bounties dead rather than alive, because he is one of the few people who can identify a gang of three brothers that Schultz would like to collect the bounty on. After locating and freeing Django, Schultz quickly discovers that Django has a talent for the bounty hunting game and asks him to partner up with him, even going so far as to offer assistance in finding and reclaiming Django’s lost wife, Broomhilda, who was sold off after Django and her tried to escape from their former master. The two join forces and what ensues is a wonderfully sensationalized western full of crazy characters and all the dark humor that fans have come to know and love from Mr. Tarantino.

The craft of DJANGO UNCHAINED is simply stunning. Tarantino has always been a very stylized director, most of his films hark back to the classic genres that inspired them, and this one is no exception. With what has almost become a standard of Tarantino films, the movie opens with classic company logos and credits, but that tends to be the limit for obvious homage, as the movie quickly turns into a polished gem of modern cinema. DJANGO UNCHAINED feels like a western, but what makes it shine is the flair Tarantino gives it. Extreme close ups, sharp visual juxtapositions, and many shots from unusual angles or distances all combine to give the movie a fun, interesting, and thoroughly modern look, all while maintaining the look and feel of a western. Beyond giving us a visual feast, Tarantino’s story craft is better than ever. Like any good story, DJANGO UNCHAINED goes through a myriad of twists and turns, but what makes this one stand out is how natural it feels. There is always a torrent of dark humor running through Tarantino movies, and while there is plenty of it here, none of it feels unnatural or overdone. The humor is coaxed out of the scenes by merely taking some of the more dubious adventures of daily life and allowing them to crop up at unexpected times, giving the movie a somewhat more natural feeling than I am used to with Tarantino films. While the other great part of the story is the character development, it is handled in much the same way as the humor, naturally. Things that are a part of every day life, whether it’s reminiscing about the past and telling stories, buying new cloths, conducting business transactions, or getting a drink in a bar, are all used in creative ways to develop characters that are multifaceted with a real level of depth. DJANGO UNCHAINED certainly looks and feels like the most accomplished film Quentin Tarantino has made to date. 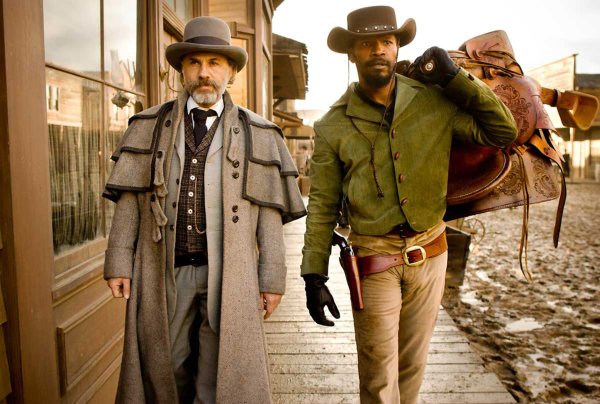 No matter how great a movie’s story is, it wouldn’t be much without talented performers to bring it to life; fortunately, Tarantino continues his track record of assembling an outstanding cast. Jamie Foxx (RAY) takes the lead role as Django and he does a nice job with it. While Foxx is certainly a talented actor, I usually find his performances to be good but forgetful, however, the range he displays with Django was rather impressive and I don’t think this performance will be slipping from my mind any time soon. Christoph Waltz (INGLORIOUS BASTERDS) steps into the shoes of Dr. King Schultz and, as usual, does a fantastic job. Schultz has a dualistic personality, he kills people in cold blood for the bounty on their heads while at the same time he finds slavery abhorrent, while this may not seem like a conflict to some people, when you boil it down both sides deal in humans as commodities, so it is a fine line to walk, but Waltz walks it perfectly. Waltz is every bit as charming as you would expect a gentile doctor to be, and every bit as ruthless as you want a loner bounty hunter to be, and he makes it seem perfectly normal. American cinema owes a debt of gratitude to Mr. Tarantino for introducing Christoph Waltz to them; he is a treat to watch here, as in all his other movies, and I will continue to search out his projects. Another actor who knocks it out of the park is Leonardo DiCaprio (INCEPTION) who portrays the smarmy plantation owner Calvin Candie. DiCaprio has been doing consistently great work for a decade now, and in the case of Candie he gives a truly inspired performance. The character is so natural that you just find yourself accepting that this is a man whose views on life and slaves are as sociopathic as they are charismatic. It’s been a few years since Leo has been up for an Oscar, but I wouldn’t be surprised to see his name among the nominees this year. Samuel L. Jackson (THE AVENGERS) is a scene stealer as Stephen, Mr. Candie’s elderly house slave. Jackson is perfect as the sharp eyed, smart mouthed, slave patriarch who seems almost as bad as Mr. Candie in his barbarism towards other slaves. These major performances, as well as the excellent work done by the entire ensemble, help make DJANGO UNCHAINED a fantastically entertaining movie. 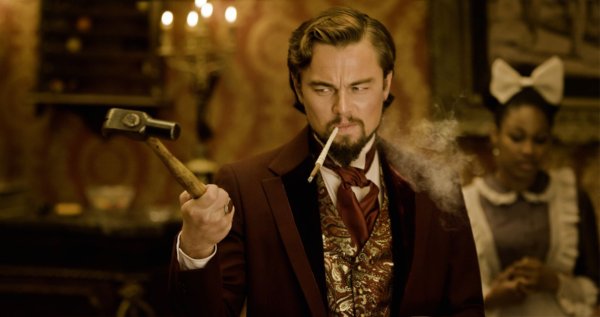 Quentin Tarantino has outdone himself with DJANGO UNCHAINED. It’s well directed, well written, well acted, and definitely one of the most entertaining movies of the season. If you are a fan of Mr. Tarantino, a fan of westerns, or if you just want a fun movie with colorful characters, pervasive violence, and plenty of dark humor, then you should head on down to your local theater, because this is definitely the movie for you.