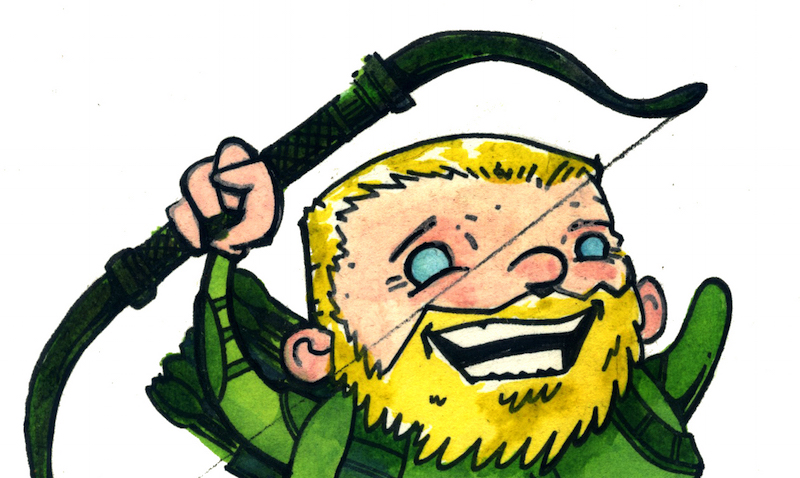 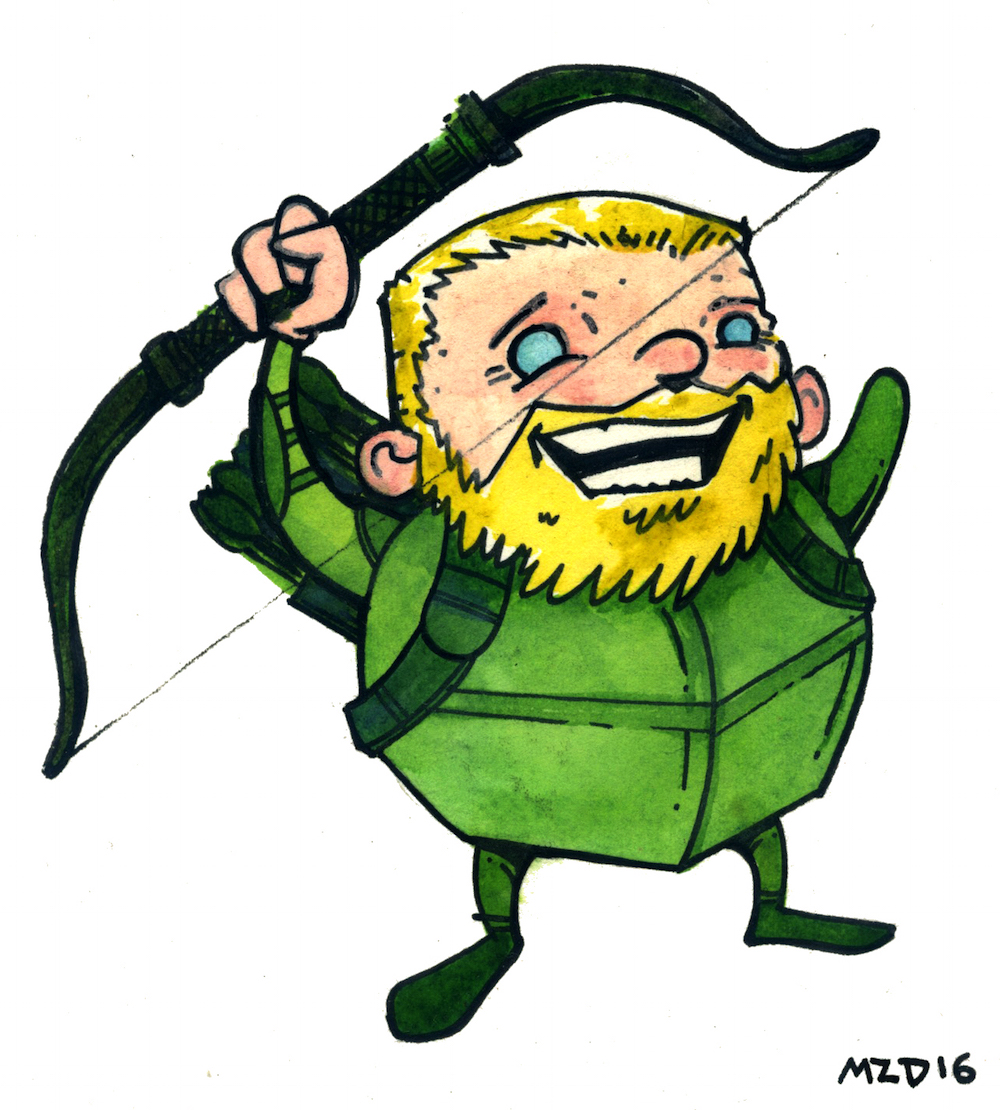 The best thing LEGENDS has going for it is the truly vast and eclectic cast of characters. For newcomers, LEGENDS is basically about a rogue time-traveler named Rip Hunter (Arthur Darvill) who decides to gather up a ragtag group of heroes from different points in time to help save the world…NAY…TIME ITSELF from the evil “Timemasters” who are hell bent on ruining everything just because. But in reality, Rip is a selfish renegade who’s out for vengeance against the dastardly villain Vandal Savage (Casper Crump) who is credited for killing Rip’s wife and child in the not too distant future. So basically, Rip is sacrificing his life, a ton of other people’s lives, and TIME ITSELF in order to save his 2 family members and reclaim his previous happiness. I know…kinda lame Rip. But hey, it makes for good TV!

So who are these poor souls who must join Rip on his selfish quest for self gratification? Well, it’s a gaggle of characters we’ve already met in ARROW and FLASH. We get Ray Palmer/Atom (Brandon Routh) who’s basically DC’s answer to Iron Man and Ant-Man, the oldest person you will ever see on The CW Dr. Martin Stein (Victor Garber) along with the overly-energetic Jefferson Jackson (Franz Drameh) who when combined make Firestorm, the brotherly duo Mick Rory/Heat Wave (Dominic Percell) with Leonard Snart/Captain Cold (Wentworth Miller) serving as our reluctant villains turned reluctant heroes, Sara Lance/White Canary (Caity Lotz) who’s been resurrected more times than I can count, and Kendra Saunders (Ciara Renee) with Carter Hall (Falk Hentschel) as Hawkgirl and Hawkman respectively.Having these characters already established in this universe really helped get the ball rolling avoiding the need to delve too deep into their individual origins. And considering LEGENDS only consisted of 16 episodes, it was appreciated.

For me, Atom, Captain Cold, and Heat Wave were by far the most interesting characters. Routh as Atom is just perfect. He’s a funny and dashing nerd with a big heart and a bigger brain. We’ve seen him in Arrow and Flash’s shadow for too long and it’s great to see him front and center being the hero. And who doesn’t love Captain Cold and his unpredictable brother Heat Wave? These two meatballs have been tearing up this universe as villains for years and seeing them work on a team of heroes was just so amusing. Heat Wave gets the biggest character twist in the season and Captain Cold gets the most emotional scenes surrounding his relationship with his brother and potential love interest White Canary.

Speaking of White Canary, she’s back…again…for the last time…maybe. Aw who cares, she’s a cool character that’s been around since day one…like seriously, ARROW S1 E1. She’s been through the most out of all these characters and while battle-hardened, she still has a good sense of humor and just goes along with it all. I especially enjoyed her interactions with Dr. Stein when not attached to Jackson in Firestorm form. And while both parts of Firestorm have some moments, they felt a little bland overall. But I suppose someone has to be flying around on fire during those fight montages to add a level of “cool”. And it is cool.

The weakest characters by far were Hawkgirl and Hawkman. Which is too bad because they should be stronger. Hawkgirl was just so jarringly out of place here. Unfortunately I think a lot of it has to do with actress Ciara Renee being a little underdeveloped in her craft. I don’t mean to be harsh, because she is likable as all hell, just a little too scripted when standing among the likes of Routh and Miller. And Hawkman’s arc was a little misguided at times likely due to the writers wanting to add a little love story in the mix between Atom and Hawkgirl that definitely felt forced. It definitely missed the mark and the subtle “love” shared between Captain Cold and White Canary was much more effective. There’s a sentence I never thought I’d write. While we’re on the subject of criticisms, I have to say Rip is just not a badass at all. He’s a winey selfish little brat who is playing grown-up. Hey dude, Malcom Reynolds you are not. And while I appreciate a good villain, Savage was just over the damn top in a “I was a pornstar in the 60’s and I won’t let anyone forget it” kind of way. I mean sure, I hated the dude, which is a requisite for any good villain, but I’m just not sure it was for the right reasons.

With an ensemble this big there will likely to be some characters you love and some characters you just don’t. As an audience member I’m just spoiled because I like all the Avengers, I liked everyone in the Guardians of the Galaxy, and hell, I even liked the whole Suicide Squad. But the key character’s I enjoyed in LEGENDS were enough to keep me coming back each week so the scale was tipped in my favor.

Either way, LEGENDS is just damn fun. The time travel elements actually worked quite well. Usually it takes me out of the experience because there are no large consequences. But in LEGENDS big things do happen and there is quite a bit of permanent tragedy going on. Between nods to PRISON BREAK, adventuring in the Wild West with Jonah Hex, traveling to the future where a bearded one-armed Green Arrow haunts the streets (as seen above courtesy of artist Matt DeLight!), and tripping out in the late 50’s, I had a great time. The pacing was baffling at times and a lot of the love stories didn’t quite hit the mark, but damn what a wild ride and damn what amazing action sequences! There was some great fun here for sure.

Don’t compare LEGENDS OF TOMORROW with ARROW or FLASH too much. They are just better shows. Instead, accept LEGENDS for what it is…a dumping ground for characters that aren’t interesting in ARROW or FLASH anymore. I’m just kidding about that….kind of. What I meant to say was accept it as a fun wild ride meant to be enjoyed with a large bucket of popcorn, and open mind, and not a lot of high expectations. Fans of ARROW and FLASH will have a blast no matter what and newcomers who just like campy entertainment will find plenty to enjoy. And now that season 1 is under the belt, I think season 2 will be a lot more focused and fun…assuming the creators listen to the critics and fans.