DAWN OF THE PLANET OF THE APES Movie Review 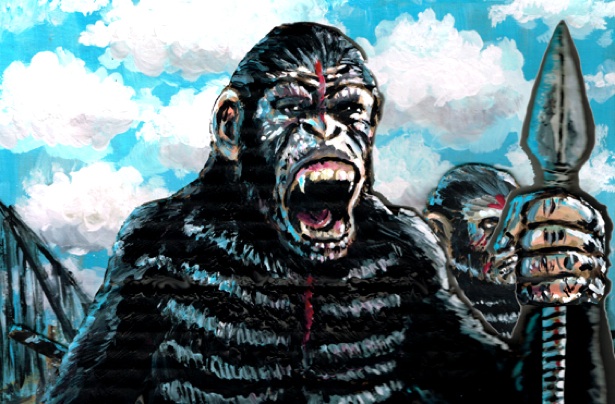 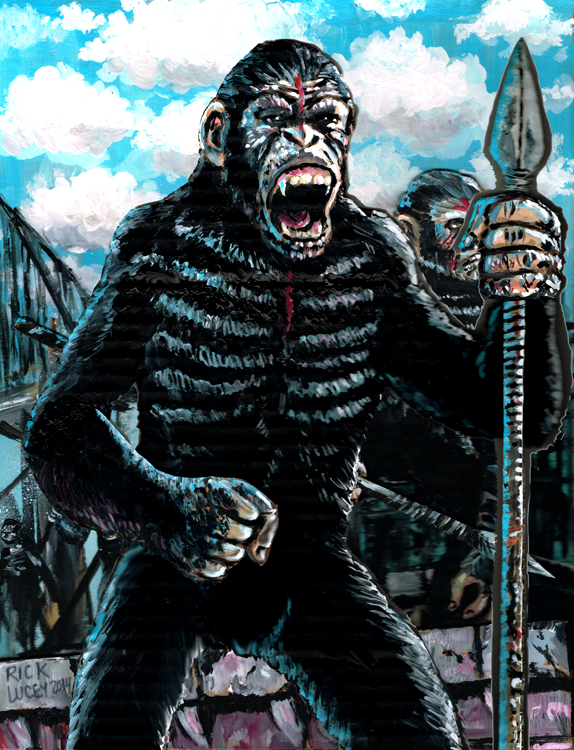 The second installment in the reboot, DAWN OF THE PLANET OF THE APES, begins and ends with the same image: a closeup of a pair of eyes staring directly into the camera. Rendered in full CGI glory, they evoke a strange mix of feelings both familiar and foreign, synthetic and organic. Even though they belong to an ape, it’s a vision of man using machines to create his own image to stare back at him. If DAWN OF THE PLANET OF THE APES is about anything besides making money, it’s about humanity losing its nature to something it creates. Its this message that gives the film a purpose even when it loses its nerve to follow it through.

The film picks up in the not too distant future of the JAMES FRANCO-infested RISE OF THE PLANET OF THE APES. A large percentage of humanity has been wiped out by the “simian flu”, and the only known survivors lay holed up in a bombed out section of San Francisco (I bet rent’s cheaper! HAHAHAHA!) Meanwhile, the apes have grown into an a strong and advanced species, led by the all-growed-up Ceasar (“played” by legend of the greenscreen Andy Serkis, RISE OF THE PLANET OF THE APES). While searching for a power plant that could save humanity, a group of humans led by Malcolm (JASON CLARKE, ZERO DARK THIRTY) accidentally makes contact with the apes. This sets off a chain reaction of events that leads to the things you’ve seen on every movie poster.

It’s at its early stages that DAWN OF THE PLANET OF THE APES (do they get royalties for each word in the title?) is the most interesting. Focusing entirely on the apes for opening moments, the film creates “nonhuman” characters that each have their own facial expressions, mannerisms, and personalities that feel surprisingly nuanced and organic. A lot of this obviously has to do with the advancement of motion capture technology. But unlike Avatar, which felt like an excuse for James Cameron to play with new toys, the digital tools here enhance the universe and the story the film creates, even if I still fucking hate CGI.

These early scenes also show you exactly who the more interesting characters in the movie are gonna be, and soon after that the humans are introduced I started getting that feeling I was watching more clone versions of their ape counterparts. Some humans want peace with the apes, some humans want war. Some apes trust the humans, and some apes don’t. By focusing on arguments internally within the two groups, the film manages to ratchet up tension well without resorting to overt violence or obvious plot points. In many ways, DAWN OF THE PLANET OF THE APES is a throwback to sixties sci-fi and cold war thrillers, where the majority of the film is characters making choices both morally and intellectually, rather than just one action piece after another….

Which then becomes the problem. You can’t have an 170 million dollar movie without blowing a lot of things up. Inevitably, when the violence between the humans and apes erupts, it feels like an obligation rather than something natural to the story. The careful balance of tension and character ambiguity become an excuse for characters to kill each other in hugely expensive ways. As much as I know that it’s pointless to bitch about action in a summer blockbuster, it just seems predictable and phoned in to me. It negates some of the strength of the film that came before it, and feels like watching a really expensive game of connect the dots.

The original PLANET OF THE APES was the first real science fiction movie I watched as a kid. As hammy as it is now, there was a real still sense of mystery to it. The movie worked because it had faith in its own ideas, even through all the goofy monkey prosthetics and overacting. DAWN OF THE PLANET OF THE APES, in many ways, is the smartest and slickest film in the whole franchise. I just wish it had a little more faith in its conviction to leave us with something more than After Effects carnage and destruction. But, hey, we can still stare into those eyes.