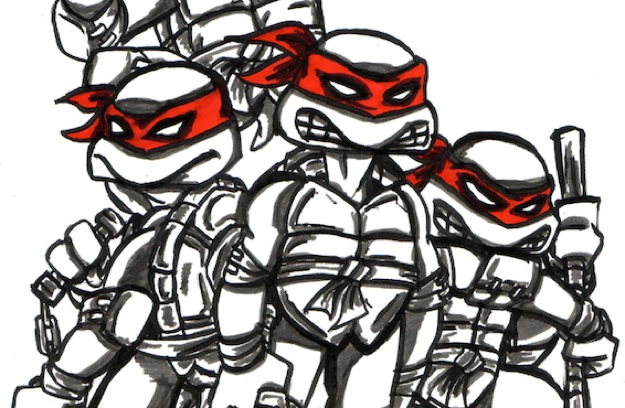 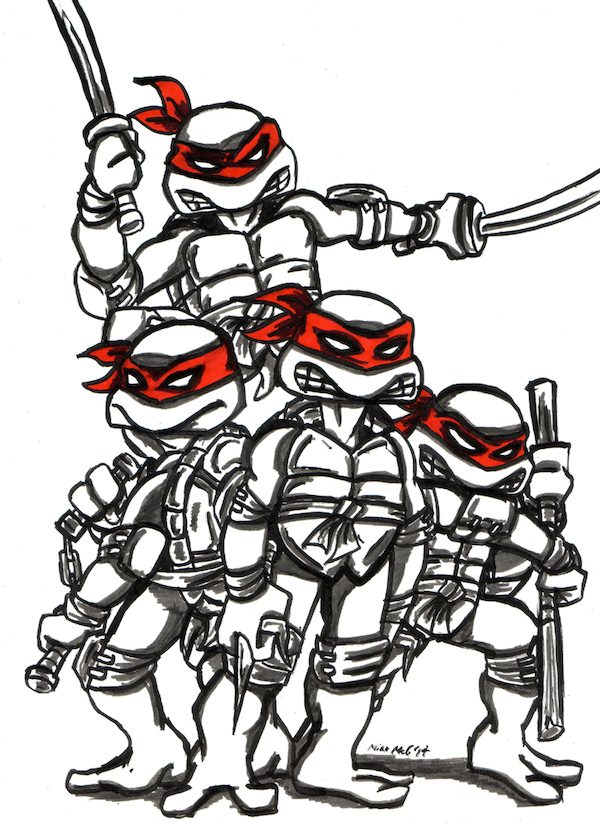 How many times do I have to say it, people?  I am a diehard fan of the Teenage Mutant Ninja Turtles!  It was the sci-fi/fantasy property that I immediately latched onto in childhood and, throughout the years, I have found time to indulge it in some way, shape or form.  It cannot be helped.  I owe this franchise so much.  If I had never been exposed to the world of the Turtles, I never would have discovered my passion for illustration.  I remember being 7 years old and spending hours pouring over my copies of the original Mirage Comics, studying the proportions and details of my action figures and re-watching episodes of the ’87 cartoon over and over to understand how each Turtle’s personality could be captured visually.  So now you may be able to understand why a publication like TEENAGE MUTANT NINJA TURTLES: THE ULTIMATE VISUAL HISTORY would appeal to me.

With the reptilian foursome’s return to the silver screen only a few weeks away, it might be difficult to see this compendium on the Ninja Turtles franchise as nothing more than a quick cash-in.  However, if you’re an attentive TMNT fanboy (like myself), you’re well aware that the Heroes in a Half-Shell turn 30 this year and that we’re due an extensive inside look into the genesis of co-creators Kevin Eastman and Peter Laird’s silly little idea that exploded into a marketing juggernaut.  Writer Andrew Farago has assembled a fairly unbiased display of the property’s evolution over the years, warts and all.  Nowhere is this more apparent than in the foreword written by Laird, where traces of bittersweet nostalgia color his thoughts on the Turtles’ beginnings and current incarnations now that he is no longer involved with the franchise.

While the main focus of the book seems mostly set on accentuating the positive aspects of the Turtles’ longevity, it does not shy away from the missteps.  Creators acknowledge which Turtle movie left little to be desired, when the ’87 cartoon lost its sparkle or how including a 5th female turtle for a live-action television show was an extremely controversial choice.  You’re given insight into how Eastman and Laird’s friendship and collaborations suffered from TMNT’s success and how they were essentially resigned to becoming company figureheads.

But the true boon for me is the sketches, layouts, script pages and photos that are contained throughout the book.  Granted, some of these excerpts are also available in the Collected Ultimate Editions of the original Mirage Comics run, but this provides behind-the-scenes visuals for other versions such as the multiple animated series, films and various forms of merchandising.  This is the kind of stuff I find fascinating; being able to peek behind the curtain of a property I love to see what makes it work in different media.  It still amazes me to this day that the commercial success of the Turtles is all owed to two artists having fun making a self-published underground comic book in the dining room of their small New Hampshire house.

The only part I found to be a “fluff piece” came towards the end of the book when they addressed the upcoming Michael Bay/Platinum Dunes reboot.  It’s stereotypical promotional material such as superficial interviews with the actors and crew that really don’t offer much insight to the filmmaking process.  But, to be honest, I pretty much expected that.  The film isn’t even out in theaters yet.  Perhaps for the 40th anniversary we’ll get an updated edition discussing whether the film was a flop or not.

Also included with the book is a black and white reprinting of TEENAGE MUTANT NINJA TURTLES #1 and a poster illustrated by Kevin Eastman and TMNT artist Ryan Brown (both items are contained in a pocket on the book’s rear jacket).  While the last section on the reboot reads more as an ACCESS HOLLYWOOD piece rather than a book chapter, the rest of THE ULTIMATE VISUAL HISTORY is a much-welcomed addition to my bookshelf.  Diehard TMNT fans will like it and I, for one, cannot wait to start pouring over it again and again just like I did when I was 7 years old.