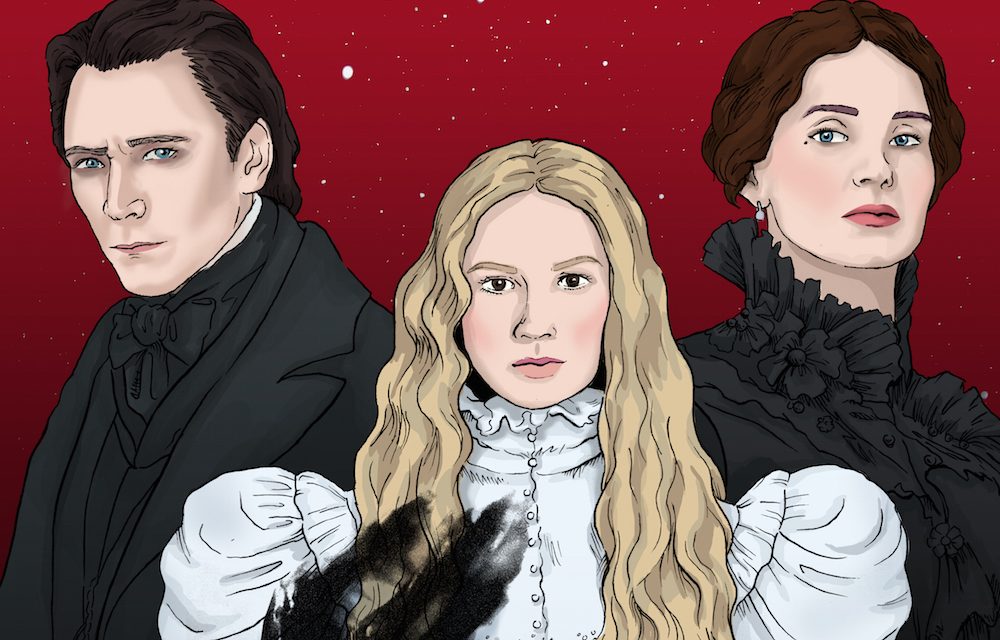 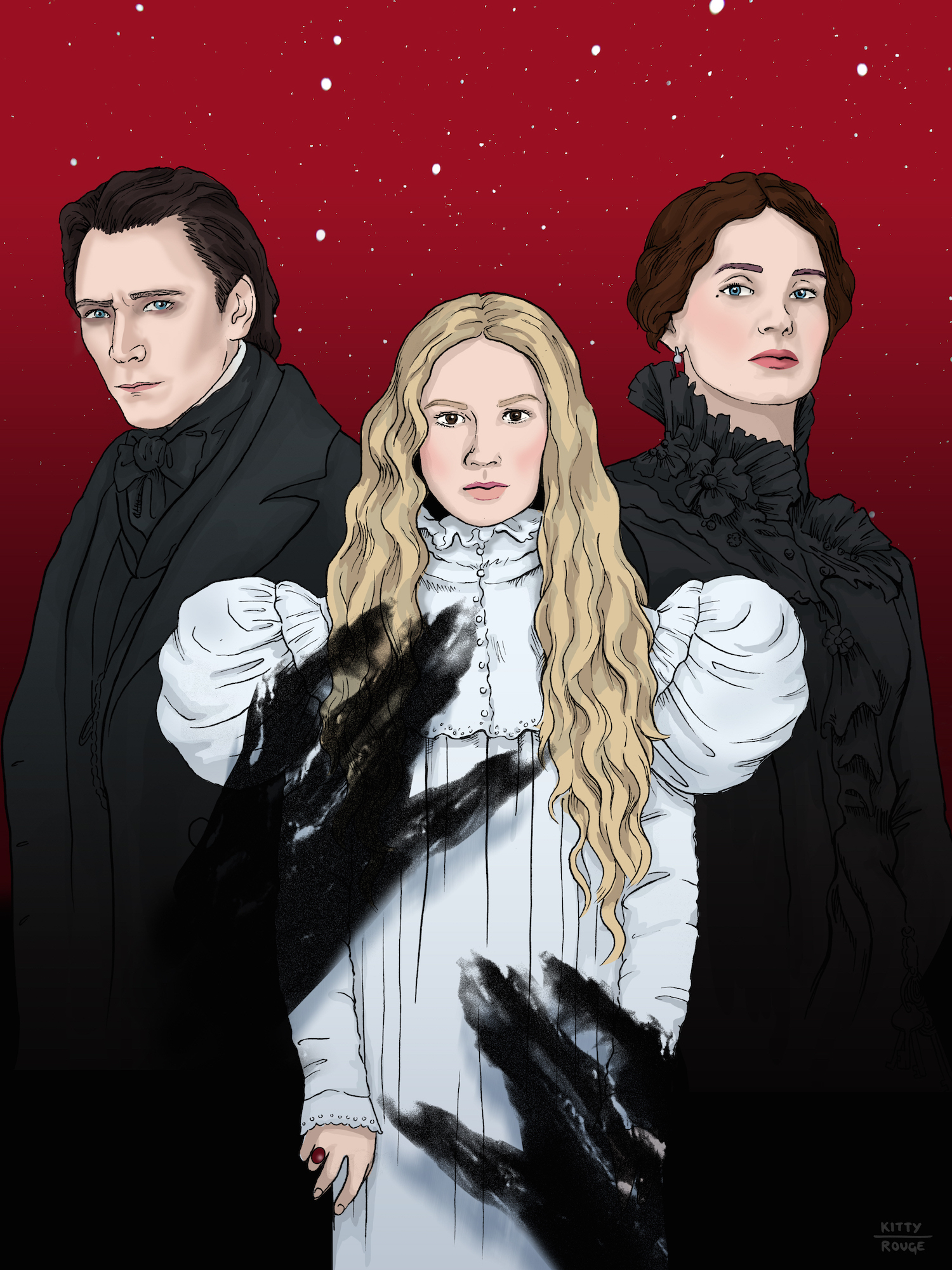 WARNING: Heads up, there are some small spoilers within so tread lightly.

Guillermo del Toro’s CRIMSON PEAK may not be the horror movie you think it is upon watching the spooky trailer or the preconceived expectations you may have as a modern moviegoer. Make no mistake, this is not a horror movie in the traditional sense, but rather a throwback to gothic romanticism that prioritizes atmosphere, character development, and plot over jump scares and shock value gore. While the average moviegoer may not appreciate the slower pace and lack of constant gore-porn, those patient enough and willing to immerse themselves in the deeply crafted story will be pleasantly surprised and treated to a wonderful film filled with a stunning cast, beautiful set and costume design, and some scares and violence that actually pushes the plot forward rather than just for the fun of it all.

Wasting no time at all, our main heroine Edith (Mia Wasikowska, STOKER) proclaims that ghosts are real and that this tale is not a ghost story, but rather a story with ghosts in it. This is the perfect set up and lets us dive right into this beautifully frightening universe. Within minutes we are treated to an eerie visit from Edith’s mother in ghost form warning her of something mysterious called “Crimson Peak”. We fast forward to see an adult Edith as an aspiring author who lives under the overprotective shield of her father (Jim Beaver; SUPERNATURAL) who just wants the best life possible for his daughter. When a dashing stranger comes to town named Thomas Sharpe (Tom Hiddleston; THE AVENGERS) with his sister Lucille (Jessica Chastain; INTERSTELLAR) her world gets turned upside down as she gets swept away and falls in love oh so quickly. And come on, this is Loki we’re talking about…the dude redefines dashing. The thing is, Edith’s father and her longtime friend (who has a crush on her) Dr. Alan McMichael (Charlie Hunnam, PACIFIC RIM) don’t really care much for this stranger and think he’s not a good fit for young Edith. A mysterious tragedy leads to the death of Edith’s father, she is soon swept off her feet by Mr. Sharpe, and promptly moves to his English mansion that doubles as a red clay mine because it makes everything look creepy as hell. And I don’t mean to state the obvious, but things don’t go so great in that isolated and crumbling mansion.

As mentioned above, the plot is a bit slower than what one may be use to. The narrative is also a bit disjointed making me feel as if I was watching 2 different movies back to back. There is the long introduction scenes with Edith, her father, and Dr. McMichael that I admit could have been shortened for the sake of pacing. Then, once the mysterious stranger Mr. Sharpe has his way, we are whisked away to the English mansion where the second half of the film takes place. This 2 part structure isn’t horrible, and I did enjoy the chance for the characters to get fleshed out a bit. Perhaps an old school intermission would have been appropriate here. Me feeling disjointed at times may have been intentional to get the audience to relate to Edith who was also torn from her comfort zone, or maybe I’m just giving the film extra credit because no matter what section of the movie I was in I was having a damn good time chewing on the atmosphere. The mansion that we spend the latter half of the film with can be considered a character in itself due to how alive it felt. The walls bled red clay, the doors and elevator creaked and moaned, the hole in the roof allowed leaves and snow to fall in, and that painting in the main room was just creepy as all hell and looked like it would start moving at any second. Everything about the set design and overall mood in this film was just perfect. A true achievement is visual storytelling.

Visuals and plot aside, CRIMSON PEAK shines brightest with its wonderful cast of characters that switches up the gender roles significantly giving us some truly memorable performances. Wasikowska’s Edith was just brilliantly cast here as our main lead who is strong, but a bit ‘off’ making her a pretty dynamic character. Her screen presence is quite mesmerizing and she owns this role displaying just the right mix of vulnerability and independence needed. Just when you think she will fall into a trope, she goes and kicks some damn ass while one of the boys wrestles with their oversensitive emotions. Beaver as Edith’s father snuggly fits into this time period and nails the gruff and overprotective father figure roll effortlessly. He really is an underutilized actor and I would love to see him get more roles out of his stereotype. del Toro’s PACIFIC RIM star Hunnam takes a back seat this time as the boy next door who has a crush on Edith but is way too nice to let anything ever happen. It’s a nice juxtaposition to his SONS OF ANARCHY persona and it actually works quite well here. You can tell he cares, but just can’t be the man Edith is looking for. And now we come to Hiddleston’s Thomas and Chastain’s Lucille. Holy cow do these two steal the show. Thomas is mysterious, charming, and convincing when it comes to what he wants. He also has a soft spot in him that reveals his inner torment. Lucille on the other hand is vengeful, spiteful, rough around the edges, and rarely reveals any type of kindness towards anyone but her brother…and even that’s iffy. She easily stole most of the scenes she was in and was quite terrifying at times making one wonder if humans are scarier than ghosts. The sibling’s screen chemistry was spot on, and as their character’s motives were revealed, their interactions with one another got more intense and dangerously powerful. In all honesty, there wasn’t an actor here that I can say anything bad about. The casting was dead on, and the performances were all truly memorable in their own way.

While I may be gushing a bit too much here, I do have a few things that proved bothersome besides the aforementioned pacing issues that hold CRIMSON PEAK from reaching the heights of its potential. The first and most notable criticism I have is with the use of CGI for the ghostly characters. Don’t get me wrong, they looked stunning and creepy in a very cool kind of way, but CGI characters aren’t really scary to me. CRIMSON PEAK would have been the perfect opportunity to bring back some practical effects for this genre and it would have worked oh so well here. I believe this to be the films biggest missed opportunity and I am saddened that a director who usually does some great practical effects decided to go full-on CGI this time around. Secondly, I absolutely loath musical cues in scary movie telling me when to jump or be scared. It’s something a lot of people don’t think about, but I find it insulting as an audience member with a brain. If you don’t agree with me, watch this film and imagine every scene with a ghost creeping by with no musical cues and tell me I’m wrong. You can do the same thing with just about any movie trying to scare its audience. Ghosts moving toward you or creeping behind you is always scarier silent. Fact. It’s like the laugh track in a sitcom…pulls me straight out.

While most will still label CRIMSON PEAK as a horror movie (I can see why), that would be a disservice for those on the fence who may avoid it for that label alone. Above all else, CRIMSON PEAK is a beautifully crafted gothic romance brimming with eerie atmosphere, a wonderful cast of characters, and some vivid imagery that will likely haunt my mind for some time to come. The gender role reversal is most welcome creating some of this year’s most memorable characters. And while the dependence on CGI and musical cues made a few of the scenes less effective, CRIMSON PEAK is still a huge achievement is storytelling, world building, and character development that a lot of movies can learn from. This is an instant classic for fans of del Torro and is most definitely worth your time and brief lapse in sanity.