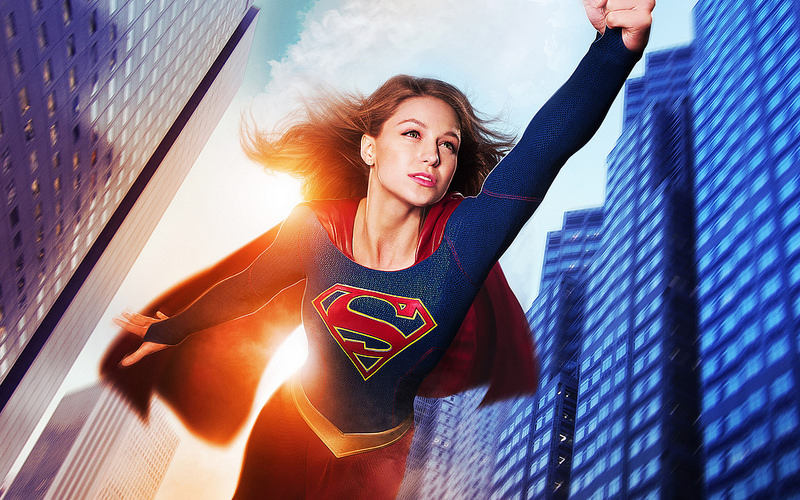 Wow. I really ‘Ebenezer Scrooged’ my way through this premiere episode. The nerd spirits!  They did it all in a single night!  I’m dancing naked on my tombstone! Isn’t that how Scrooge ended?  I know there was something about a large turkey hanging in a window…

I’m going to start at the end and tell you that I really liked SUPERGIRL.  I liked it so much that I am no longer able to explain to you why I was so frustrated with DC for hacking up their comic book universe and throwing it all over television.  I liked SUPERGIRL so much that I don’t mind that (on top of having their shows scattered across 4 different TV networks) they are also creating a series of movies that exist in a completely different universe from any of their television shows. A cinematic universe that also features duplicate characters from their TV world.  Nope.  I don’t mind that one bit. (There’s a multiverse, baby!)  Regardless of that little nagging part of me that isn’t completely able to see the nerd forest for the nerd trees, I still found myself getting wrapped up in the excitement and wonder of SUPERGIRL.  Which, kind of scared me…

Leading up to the premiere of SUPERGIRL, all I could think about was the failed DC TV show from 2002 called BIRDS OF PREY.  Heard of it?  BOP was an all female superhero show that existed in Gotham City.  The show followed a retired Batgirl (who was now in a wheelchair and fought crime as a hacker named Oracle), Huntress (Who I think was the daughter of Batman) and a ‘right off the bus from Nebraska’ version of Black Canary.  Oh and Harley Quinn was the main villain. How cool is that premise? The show itself had potential, but it’s downfall existed in the reality that people didn’t want to watch a TV show that featured all of Batman’s supporting cast and no Batman. Not even a Robin could be seen. Remember, it was 2002.  BUFFY was one season away from ending.  FELICITY had just ended.  No more DARK ANGEL. FARSCAPE was a year away. There were no female role models on television. Especially, ones with super powers. Okay, STARGATE was on TV and Samantha Carter kicks balls.  BIRDS OF PREY could have been something huge for those looking for strong female superhero role models.  Going into SUPERGIRL, I felt the weight of what this show could be.  I felt the fear that SUPERGIRL would rely too heavily on Kara’s connection to her famous ‘building leaping cousin’ one town over.  The pilot episode had to establish Kara as a strong character we would want to follow, a story line that was compelling enough to deliver it a second season and an ability to exist off the shoulders of SUPERMAN.  I feel confident enough about the premiere of SUPERGIRL to say that it delivered on most of that.

If there’s one thing you need to know about me, it’s that I am a huge fan of stories that start off telling you about the ‘big event’ that you’re already familiar with and then the camera pans to the left and the narrator is like ‘here’s the story you didn’t know.’ That shit is so dope. It’s safe to assume that you know the story of Superman.  I’m not even going to waste your time telling it to you again.  Damn it. alienhomeworldisdestroyedsonsenttoearthkansashassuperpowersbecomessuperpopularanduniversallyrecognizedhero. The story you didn’t know is that the ‘big guy’ had a 12 year old cousin named Kara Zor-El that was also sent to Earth to watch over her infant space kin.  Wouldn’t you just know that her space ship got lost on it’s way to Earth and her cousin ended up growing up on his own and becoming the most powerful being in the known universe? Tale as old as time.  Now, Kara finds herself on Earth with no real mission to speak of.  What’s an all powerful super being to do? Become an executive assistant!

The premiere episode of SUPERGIRL was a ‘packed speedo’ of happenings.  After Kara Zor-El crashed landed on Earth, she was promptly retrieved by a grown ass SUPERMAN who delivered her to some scientist friends of his, Eliza and Jeremiah Danvers.  WHO ARE PLAYED BY DEAN CAIN and HELEN SLATER.  If you don’t know why that’s relevant, see yourself out. Kara has decided to live a ‘normal’ life, since her cousin was already enough superhero for the both of them.  Of course, a plane carrying her sister is about to crash and Kara steps up and steps out, revealing her powers to the world. Upon doing so, she discovers that true happiness comes when you fully accept yourself for who you are.  (I encourage you to find your own allegories for that.) As soon as Kara starts to get the hang of flying and shit, she is swept up by a super secret government organization that monitors alien activity on Earth.   They tell her she doesn’t have what it takes.  She ensures them she does.  You find out that a prison full of space aliens crashed landed on Earth around the same time she did and now she’s going to have to spend the next season fighting a new one every episode.  Oh!  Her sister works for this top secret group and Jimmy Olsen is hanging around looking buff and shit.  Solid stuff.

I have a lot of excitement for season 1 of SUPERGIRL.  The writers had to get a lot established in the first episode and now that they have, they can move forward with Kara navigating her superhero life and her normal ‘Clark Kent’ reality.  I like that pretty much everyone important already knows that she’s Supergirl.  I’m a little bothered by how often Jimmy Olsen found a way to work ‘Superman’ into the conversation. Will Superman even make an appearance on the show?  Would that be weird considering we have a new SUPERMAN movie hitting theaters in 4 months? MULTIVERSE! I left this episode happy that it didn’t exist in the same universe as FLASH and ARROW. I can’t believe I just said that. I feel like that would only take away from the experience of the show. Kara Zor-El is one of the few female heroes currently existing in cinema that starts off as a seemingly regular person and then becomes a great.  As soon as we met characters like AGENT CARTER, Black Widow, Wonder Woman, and Gamora, they are already extraordinary. Kara is a charming little goof who can shoot laser beams from her eyes.  Melissa Benoist is perfect in this role.  She is aloof and serious and conflicted and optimistic. Kara isn’t Clark Kent.  Kara actually spent most of her childhood on Krypton.  She is an orphan in a way that Superman could never be.  The pieces are all there for SUPERGIRL to be an extremely powerful presence on television. I’ll definitely be giving it a try.  The first episode did its job of getting us up to speed, now it’s time for episode two to knock it out of the phantom zone.