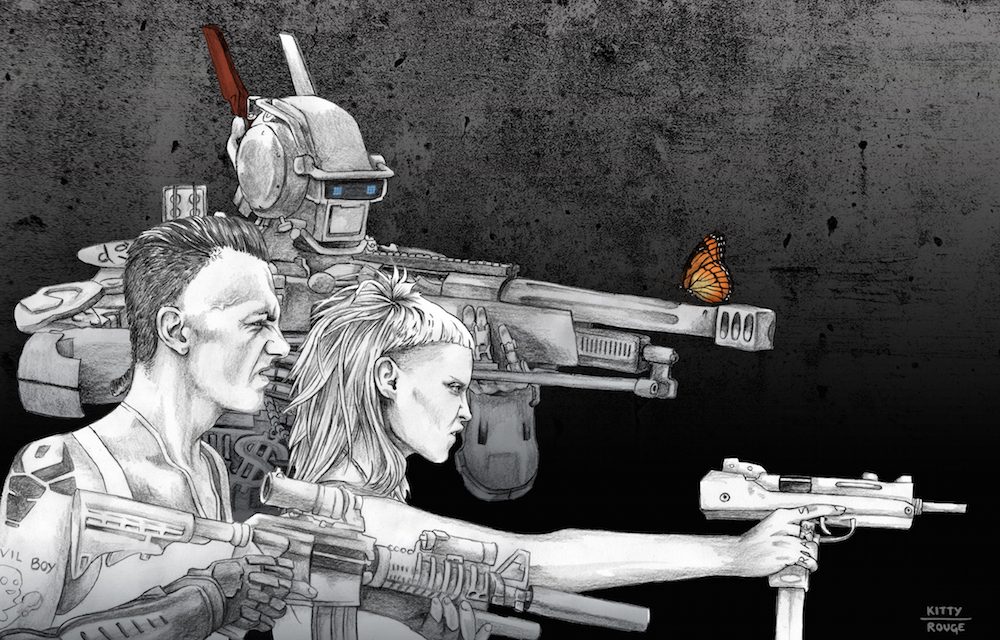 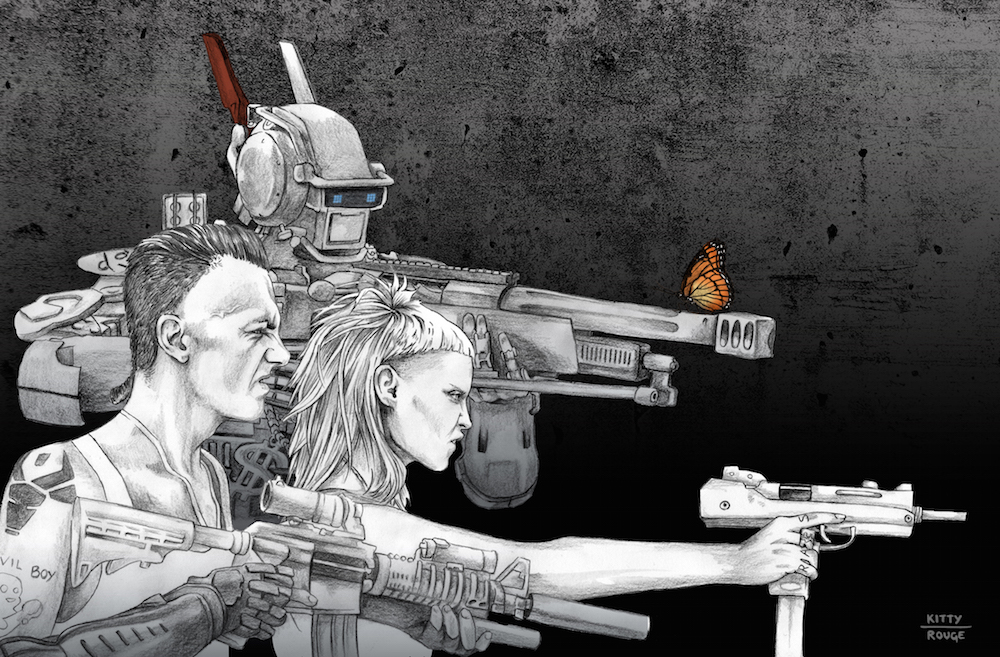 CHAPPIE was an absolute blast to watch yet I find myself having to defend when it comes up with my nerd friends. Phsss, some friends they are! Is it because I have the ability to enjoy a movie that doesn’t want to change my life or have a deep philosophical message!? Maybe. CHAPPIE just wants to entertain, have some fun, and be weird. And it does so oh so beautifully. I laughed, I almost cried once, I thought a little but not a lot, and I was treated to some stellar sci-fi robot action! By all means…CHAPPIE is a success in my book!

Director Neill Blomkamp is at it again delivering his third hardcore science fiction film in the wake of the near perfect DISTRICT 9 and the under appreciated ELYSIUM. CHAPPIE tells a story set our near future (Anderson Cooper is still alive!) where a police droid gets destroyed in the line of duty and is soon recovered by his maker who installs a chip that allows the robot to think and feel for himself. Reborn if you will. Problem is, soon after this, a couple of opportunistic and dysfunctional gang members steal Chappie in order to use him for their own personal gain. What ensues is a fun and weird story about a robot who has to confront his new emotions and make his way in the messed up world we call Earth struggling with the age old battle between good and evil.

Let me make one thing vividly clear about the character of Chappie…he is flawlessly motion-captured and voiced by Sharlto Copley who absolutely gives Andy Serkis (THE LORD OF THE RINGS Trilogy) a run for his money. Copley brings life to this animated character that is endearingly innocent, often funny, full of important questions, and kind of badass when he wants to be. Chappie is truly one of the coolest characters I’ve seen in a movie lately and that’s thanks to Copley’s performance.

The supporting cast is nothing to scoff at either. Though it may not be clear from the trailers, Ninja and Yo-Landi Visser are very central characters and they do a bang-up job here proving that they can act their collective asses off! Some audiences may know them through their rap-rave group Die Antwoord which is so perfectly weird and awesome in its own right that their presence in a movie like this is a no-brainer. They actually play future versions of themselves and those with a keen eye will see Ninja sporting a “Die Antwoord” shirt with his face on it and Yo-Landi even wears a “Chappie” shirt solidifying that this movie is not taking itself too seriously. I love it!

Other players include Dev Patel as Chappie’s maker Deon, Sigourney Weaver as the big boss lady of a big bad corporation, and surprisingly enough we have Hugh Jackman as Vincent Moore who is Deon’s mullet-toting arch nemesis in the office who redefines having a case of the Mondays. What I love about Jackman’s role here is that he allows himself to be a wonderful supporting cast member instead of front and center. Good man. At the end of the day we have a few knockout performances from Copley, Ninja, and Yo-Landi with Patel, Weaver, and Jackman rounding things out crafting one hell of an ensemble cast. Everyone in Chappie is a joy to watch as they do their thang!

The story itself is actually quite simple. And as I mentioned above, it’s mainly just fun and weird. And that’s ok. Chappie was once a tool for society turned sentient robot who must find his own path instead of doing what he is told. He’s basically a child who must grown up rapidly in a tough and dangerous world. Sound familiar!? Chappie himself is kind of a commentary on growing up too quick, discovering the differences between good and evil, and paving the way as an individual. It’s all very relatable stuff.  And while this is a crazy science fiction story dealing with very complicated scientific notions, all the science involved is displayed in pretty simple terms for us laymen. “Oh, there’s a machine that can make a robot aware of itself just by installing a special chip. Ok”. “Oh, hey, you want to transfer your consciousness into a different body!? Sure, no problem, just plug this in and hit a button. Oh, ok thanks”. I think you catch my drift. The simplicity is not really a nitpick, just a thought. It does make the story run smoother when you toss all that science fiction gobble gaggle out of the script. I suppose if we are talking about nitpicks, I would say that a very smart scientist capable of instilling feelings into a robot would probably have some foresight and see some potential problems. But if we thought too hard about it all, we would not have Chappie…and we love Chappie so forget I said anything and just enjoy yourself.

There is a good chance you won’t like CHAPPIE. There is an equal chance you won’t be able to properly explain why because you are so use to complaining about shit. But if you enter the theatre with an open mind and realize CHAPPIE won’t change your life or do your laundry you may just have some fun. Chappie is full of funny and heart-warning moments, thanks to Ninja and Yo-Landi it’s perfectly weird in all the best ways, you will think a little bit about big things, and you will be treated to a handful of bad ass robo-heavy action moments. The performances here, especially by Copley as Chappie himself, are stellar and the whole film runs at a smooth pace with not a dull moment in sight. CHAPPIE comes highly recommended by this Asimov-loving, Blomkamp-appreciating, science fiction fan who had an itch for a great movie that just got scratched! I am Chappie!