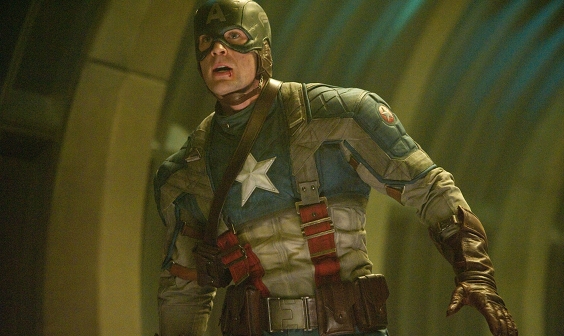 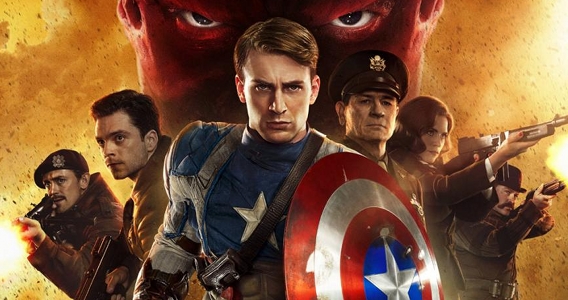 Movies based on Marvel comic book characters can basically be considered a movie genre of its own. There are so many amazing characters in the Marvel universe to explore and the current trend is fleshing out the core cast of The Avengers (Captain America, Iron Man, Thor and The Hulk) in order to build up to a climax of sorts where all the films in the franchise come together in one. The result will be like nothing even done before in Hollywood and is going to create such a huge nerdgasm that it will surely echo through the years as being something truly special. This is a good time to be a nerd.

The latest Marvel effort is the Joe Johnston (THE ROCKETEER, JURASSIC PARK III) directed film CAPTAIN AMERICA: THE FIRST AVENGER starring the likable Chris Evans (FANTASTIC FOUR Series, THE LOSERS) as our featured hero. This is the last of the Marvel movies featuring an Avengers team member before next summer’s epic THE AVENGERS directed by Joss Whedon (FIREFLY, SERENITY). The main thing I admire about CAPTAIN AMERICA: THE FIRST AVENGER is that it is first and foremost a Captain America movie and less a tie-in film much like THOR which was released earlier this summer. 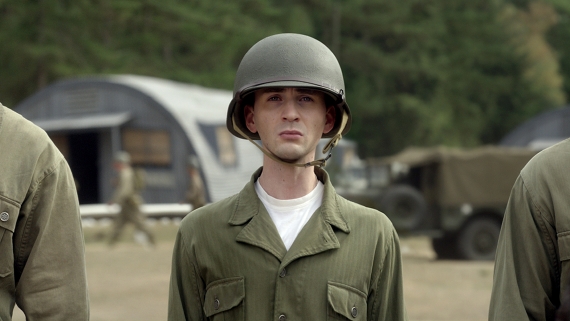 Our story begins with a skinny boy named Steve Rogers (Evans) who wants nothing more than to help his country fight for freedom. We watch as his desperate efforts lead him to a potentially lethal experiment that will ultimately transform him into the Captain America we know and love. I know there are a lot of people out there who think Evans is a poor choice for our boy in blue, but I have to admit that the performance Evans gives here is what makes this movie so wonderful. This character has true heart and the film never misses an opportunity to remind us of that. Seeing Steve Rogers struggle at first and then become the bad ass he was born to be was an exciting and fun experience that had me rooting for this character often. Evans overall performance was fantastic and now I could not imagine anyone else donning the suit or holding the shield.

The supporting cast here ain’t too shabby either. CAPTAIN AMERICA: THE FIRST AVENGER has hands down one of the coolest and best acted villains in any Marvel film in the form of Hugo Weaving (THE MATRIX Series, THE LORD OF THE RINGS Series) as the terrifying Red Skull. He is the perfect villain for Captain America and there are many iconic shots of these two during their initial confrontations and later in some kick ass action sequences. Weaving is the perfect choice for this character and I loved seeing him be the bad guy here. Besides our two leads, we get great supporting performances from Sebastian Stan (BLACK SWAN) as Captain America’s best pal Bucky, Hayley Atwell (THE DUCHES) as the main love interest Peggy Carter, Dominic Cooper (AN EDUCATION) as Tony Stark’s (Iron Man) father/brilliant inventor, and Tommy Lee Jones (NO COUNTRY FOR OLD MEN) as Colonel Phillips who has a great presence here and creates a lot of the comic relief. All in all, the cast is solid and no one seemed out of place or unnecessary. 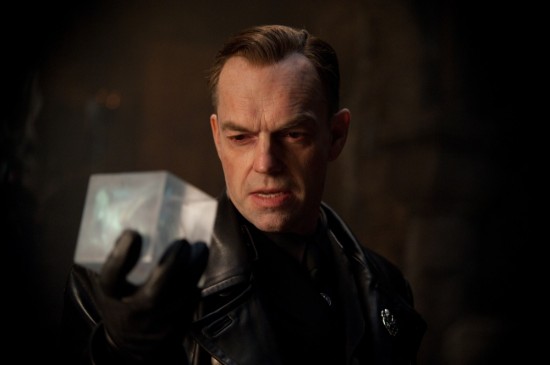 As mentioned before, CAPTAIN AMERICA: THE FIRST AVENGER is a focused Captain America movie first and a THE AVENGERS tie-in second. This IS an origins story that properly sets up the character and gives audience members a chance to see and learn about who Captain America was before his transformation. We get a true story here about how Steve Rogers came to be the legendary hero and we get to fully understand his motives, struggles, and accomplishments. The evolution of Rogers is so interesting and heartfelt that it gives this movie smooth pacing and a true sense of satisfaction. I left the theatre thinking to myself that this was a truly solid movie with little in the form of faults. I will admit, however, that I did anticipate a little more action than what we end up getting. That is not necessarily a bad thing though because the solid story and engaging characters more than made up for any shortcomings in the action department. I am left eagerly anticipating Captain America’s next adventure with The Avengers next year where he will likely be kicking tons of ass!

So while I do admit being a bit disappointed with the lack of action, that does NOT mean that the action we did get was bad. When Captain America gets in full swing he really kicks some ass. I would have liked to spend more time with Captain America on his various missions instead of getting a montage that lasted but a few minutes. My inner nerd definitely thirsted for more ass kicking with a shield and gun in hand. Besides Captain America just kicking the crap out of people and chasing foes down, we do get a couple of extremely memorable action scenes in the form of an amazing action sequence that takes place in the skies and a few cool showdowns with the Red Skull and his henchmen. Overall it is very cool stuff on display that I wish would have taken a little more risks. I would also like to add that the set pieces, vehicles, costumes, makeup, effects, and overall cinematography here was a phenomenal package. The World War II setting here is fantastic and there is a true sense of style on display here when all the mentioned elements come together. It is obvious that Johnston had a vision for this movie that shines through greatly. 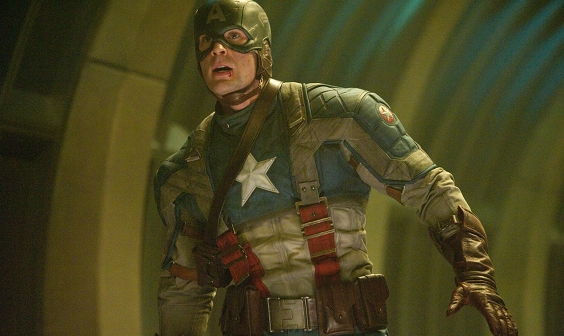 So when all is said and done CAPTAIN AMERICA: THE FIRST AVENGER is a truly kick ass film that I believe is near the top of the list of Marvel’s greatest films. This is a supremely solid movie that has a fleshed out character that I actually care about, some stunning visuals, and some good old American ass kicking. While I would have liked to see more action, what we do get is great and I am more than ready to see Captain America in another adventure. Also, DO NOT forget to stay after the credits because you will be treated to a spectacular and beefy preview of next summers THE AVENGERS! Trust me, the footage is kick ass and is not simply a teaser. So in the end I highly recommend CAPTAIN AMERICA: THE FIRST AVENGER and will be first in line to see THE AVENGERS when it comes to us next summer on May 4th 2012!