BULLET TO THE HEAD Movie Review 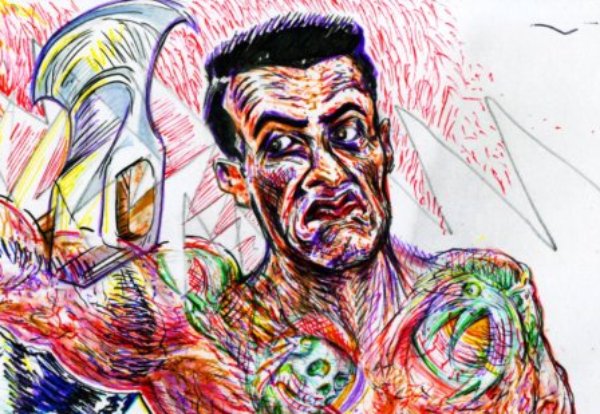 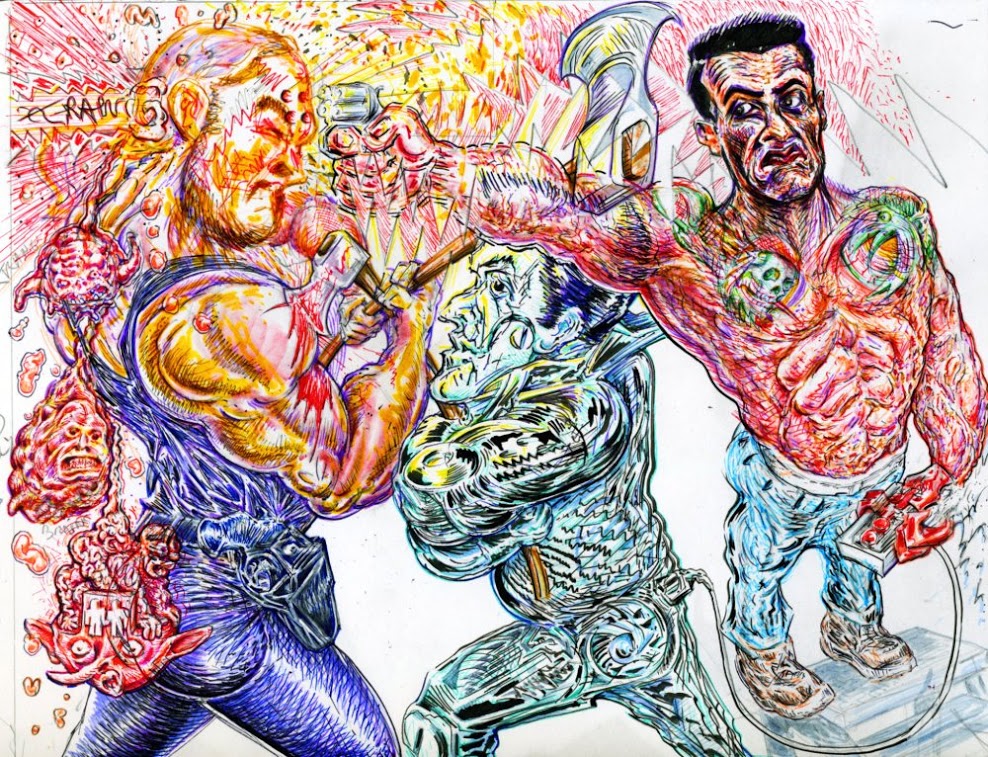 Being a Sylvester Stallone fan has a lot of give-and-take.  You sometimes feel let down by his more lackluster movies, but are quick to forgive so long as he just goes for it and tries to pull something entertaining out of his performance.  That’s why I’m able to give outings like COBRA and 1995’s JUDGE DREDD a pass.  Sure, they are silly and dumb, but gosh darn it, Stallone’s so much fun to watch!  And say what you will about him being just an action star to throw into fist fights and explosions, the dude can act (see FIRST BLOOD and the more recent ROCKY BALBOA for my personal favorites).  With a heavy resurgence in over-the-top action flicks, many spearheaded by Sly himself such as THE EXPENDABLES franchise and RAMBO, you’d think that a film titled BULLET TO THE HEAD (based off of a French graphic novel DU PLOMB DANS LA TETE) would be the non-stop thrill ride that diehard followers of the Italian Stallion would be waiting for to keep their blood flowing during the slow and chilly winter months.  Well…it’s okay.

First off, I’m also a fan of the director Walter Hill (THE WARRIORS, 48 HRS.).  He’s had similar track record to Stallone’s with a couple of cinematic potholes in the road, but the guy’s visceral visual style is tailor-made for this gritty tale of death and vengeance.  Stallone plays a New Orleans hitman named Jimmy Bobo who, following completion of an assassination, soon finds himself on the wrong end of a gun (and some knives) when his employers decide to terminate both him and his contract in order to destroy any evidence that could be traced back to them. He eventually crosses paths with investigating Detective Taylor Kwan played by Sung Kang (FAST FIVE), and finds an uneasy ally to help him bring down the bad guys.  Or, at least, the badder bad guys. 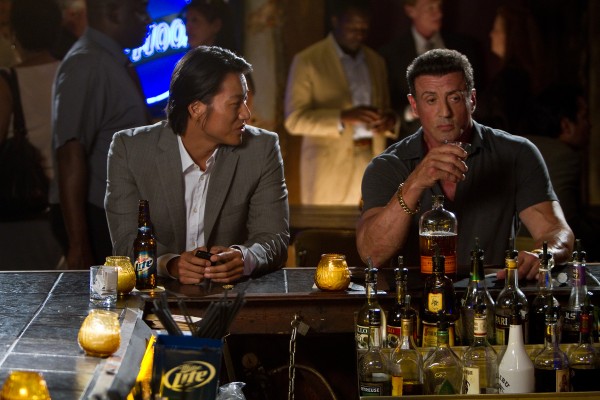 As it has been with his more recent films, Sly does a great job portraying aging tough guy Jimmy and still making it believable.  He’s still in ridiculous shape and conveys the no-nonsense mentality and intimidating demeanor well.  There really is not a lot in terms of growth and development with his character, but seriously, I doubt anyone coming into the theater to see a film called BULLET TO THE HEAD is going to be looking for a crisis of conscience or emotional journey in their main anti-hero.  He starts out a stone-cold badass and he ends a stone-cold badass.  But again, he is a lot of fun to watch.

Sung Kang does well with the role of Kwan, but much like J.Lo’s turn as a sidekick character in PARKER, he’s not really given much of anything to do.  For a detective, this guy is not that smart.  After almost getting killed by some dirty cops, he’s still quick to trust the higher-ups who are so obviously involved in the conspiracy.  He’s constantly condemning Jimmy’s violent acts (even though said violent acts are always saving his life) and proclaims a good 4 or 5 times something along the lines of, “When this is over, I’m taking you in.”  It gets old pretty fast and you find yourself rolling your eyes along with Jimmy Bobo at Kwan’s inability to grasp the concept that in the city filled with corrupt cops, the only person he can trust is the professional killer.  However, unlike J.Lo’s useless real estate broker from PARKER, Kwan does end up pulling his own weight towards the end of the film and shares a majority of his screen time with Stallone, so the overall stupidity of his character is almost forgiven for a few good scenes of action and some decent banter between him and Jimmy.  Almost.

The rest of the cast are able to hold their own, despite the fact that they are never given much time on the screen to make a lasting impression.  Sarah Shahi (THE L WORD) is all right as Jimmy’s estranged daughter Lisa, but their relationship is never given a lot of time to really care about.  Essentially, her character is only in the film to be a damsel in distress.  Christian Slater (TRUE ROMANCE) turns in an over-the-top and entertaining performance as a wormy and conniving lawyer on the payroll of the baddies, but is not utilized nearly enough.  Adewale Akinnuoye-Agbaje (OZ, LOST) shows up every once in a while to remind us that he is the evil mastermind, but is quickly swept aside in favor of an actual intimidating villain named Keegan played by Jason Momoa (CONAN THE BARBARIAN, GAME OF THRONES).  Sadly, he’s as underused as Slater, but for the time that he is on screen, Momoa dominates the action.  Indeed, his role as a ruthlessly efficient mercenary almost equals Stallone’s presence in terms of “badass” as he shoots, hacks, stabs and slashes his way through the film not for profit, but because he takes sadistic pleasure in it. 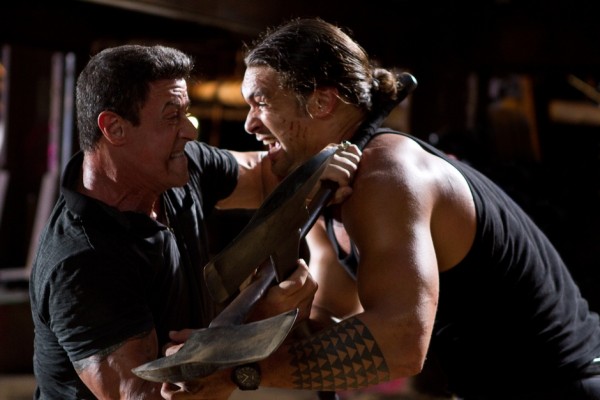 Needless to say, the action is well done and really at no point does the film let up.  To live up to the title, there are plenty of bullets to the head throughout the story.  Heck, the first frame of film shows a bullet smashing through the Warner Brothers and Dark Castle Entertainment logos heading straight for the audience.  A lot of the fights are pretty gut-wrenching as Stallone smashes the heads of cronies into walls or as Momoa mows down an entire bar full of criminals with just a handgun.  The ultimate showdown between Keegan and Jimmy culminates in an awesomely intense axe fight.  It’s Rocky versus Khal Drogo: WHO YA GOT?!

Despite the bone-crushing blows and even performances from the cast, BULLET TO THE HEAD is a pretty standard action-crime thriller.  Though it has some fun banter and visceral fights, there is never really a single moment of spectacle that grabs hold in your memory.  It’s all just okay.  And I know with certain films, “okay” is akin to saying it’s “boring” or “terrible,” but honestly, none of that ever crossed my mind during this viewing.  For starters, the movie is only about 90 minutes long and the only really grating aspect of the film is Detective Kwan who is salvaged by playing opposite of Stallone’s character for most of his screen time.  If you are a devout Sylvester Stallone fan, I’d say it’s worth the time to check out.  It’s a pretty quick watch with some adrenaline-fueled action and plenty of opportunities to see Sly do his thing.  Is it the worst Stallone film ever?  Not by a long shot (it would take a lot to take that distinct honor away from STOP! OR MY MOM WILL SHOOT).  Is it the best?  Not even close.  It’s just…okay.  And “okay” can sometimes just be okay.  Okay?