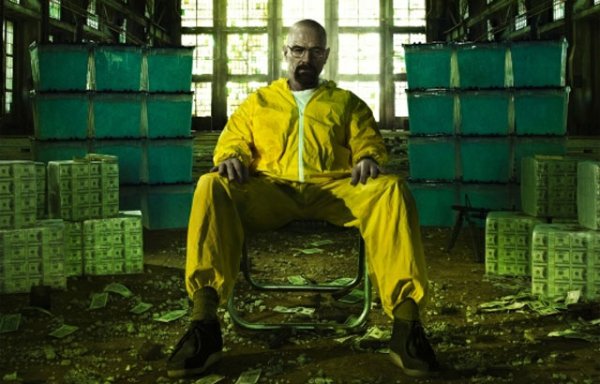 WARNING EXTREMELY VOLATILE: This review is intended for people who have seen every episode of the series so far and contains HUGE spoilers. Unless you don’t care about that kind of thing.

The wait for the BREAKING BAD season 5 premiere is finally over and I could not be happier to have it back on air with this new (and final) season. Well, it’s kind of the final season because while season 5 will have 16 episodes, 8 of them will air now and the final 8 next summer in 2013. Sounds to me like 2 more shortened seasons but whatever. I also feel it appropriate to say that BREAKING BAD is easily my favorite show currently in development with JUSTIFIED and BOARDWALK EMPIRE close behind.

Last season ended with a bang…literally. That bang was the last thing drug crime lord Gus Fring (Giancarlo Esposito; REVOLUTION) saw and his epic death serves as a show game changer leaving Walt (Bryan Cranston; DRIVE) in a huge power position if he wants it. And I’m pretty sure he wants it because it seems like the themes of last season and continuing here in this episode is the transformation of Walt from a high school science teacher into an evil crime lord. Pretty awesome stuff. I’m not going to re-cap everything up to this point in the show because I assume you are well aware if you are reading this. Instead I want to focus on this individual episode and where the series may head from here on out.

This episode titled “Live Free of Die” wastes no time jumping back into things and Walt even has the same bandage on his nose from last season indicating that the events of the episode are immediately following the season finale. That is, besides this episodes intro where we get a glimpse of Walt in the near future on his 52nd birthday. His sickness appears to be back, he seems very tired and lonely, and one can assume that he is knee deep in crime lord business due to an exchange at a local Denny’s restaurant involving urinals and huge guns. The intro was very subtle, yet interesting and makes me wonder if the show will ever catch up to this moment; possibly at the end of this years 8 episode run. It was a great and captivating beginning that gives the viewer a crap load of questions to ponder right from the start. Once the first grueling commercial break ended, we jump back to current day where Walt, Jesse (Aaron Paul; THE LAST HOUSE ON THE LEFT), and Mike (Jonathan Banks; WISEGUY) must sort out and clean up the mess from the explosion. This includes destroying Gus’ laptop that shows all three partaking in criminal activity. 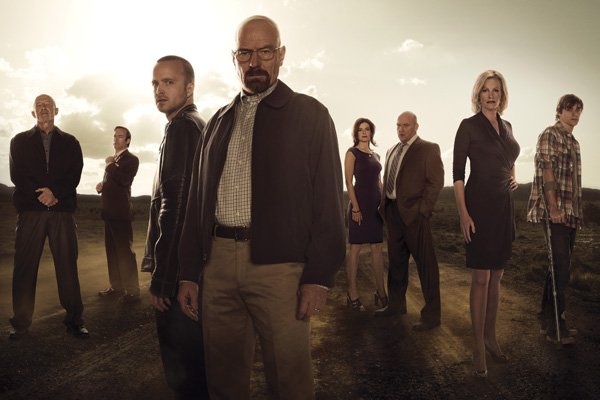 A great aspect to this episode is that it picks up from where we left off last season yet is still a very self contained episode that almost feels like a standalone heist flick. Of course you must have some knowledge of the previous seasons to know what’s going on, but my main point here is that I liked the tight focus on the boys (Walt, Jesse, and Mike) coming up with a plan to cover their tracks. It was creative and fun watching them convert a truck into a huge magnet on wheels in order to jam up Gus’s computer that had all the evidence against them and was locked up in a highly guarded evidence locker. Very fun stuff that opened up the door for some classic “oh shit” moments like when the truck flopped to its side against the building as they were needing to escape.

Seeing how most of the episode was dedicated to the magnet truck mission, there was not a whole lot of time to get into the other characters stories. Mainly we see how the events have affected Skylar White (Anna Gunn; RED STATE) and have made her more scared of Walt yet you can sense some empowerment within her because she is realizing how dangerous she can be. This is most evident wen she visits Ted Beneke (Christopher Cousins; WICKER PARK) who was long thought dead. He is crippled and on the brink of death in a hospital bed due to some of Skylar’s actions. It is obvious he is scared of Skylar now and she likes it that way. It will be interesting to see if she follows in Walt’s footsteps when tempted with power. Besides Skylar, we have a few moments with an excited Walt Jr. (RJ Mitte; HOUSE OF LAST THINGS) at home as he watches the coverage of Gus’ death on the news, we see Hank (Dean Norris; TOTAL RECALL) investigating the crime scene of the explosion, and Saul Goodman (Bob Odenkirk; MR. SHOW) up to his old tricks. It was great watching Walt tell him “It’s over when I say it’s over” when Goodman was trying to back out of business with Walt. Classic villain moment. No sign of Hank’s wife Marie just yet and no sign of any legitimate villain thus far unless you count Mike and his unwillingness to play nice all the time.

In the end what we have here is a fantastic start to what is sure to be a very fun season of BREAKING BAD. Sure Walt and Jesse are fine at the moment, but we all know that never lasts long. And now that Mike is being thrown into the mix, things will surely heat up. With no one but the police in Walt’s way at the moment, it will be interesting to see how he gets to the point we saw him in at the beginning of this episode in the flash forward. I’m also glad to see Hank back at it and out of his wheelchair and into a crime scene. He is always just once step behind and is going to catch up sooner or later. I could go on and on about what I am excited about with this season, but I want to hear from YOU. What did you think of the episode!? Sound off in the comments section below!