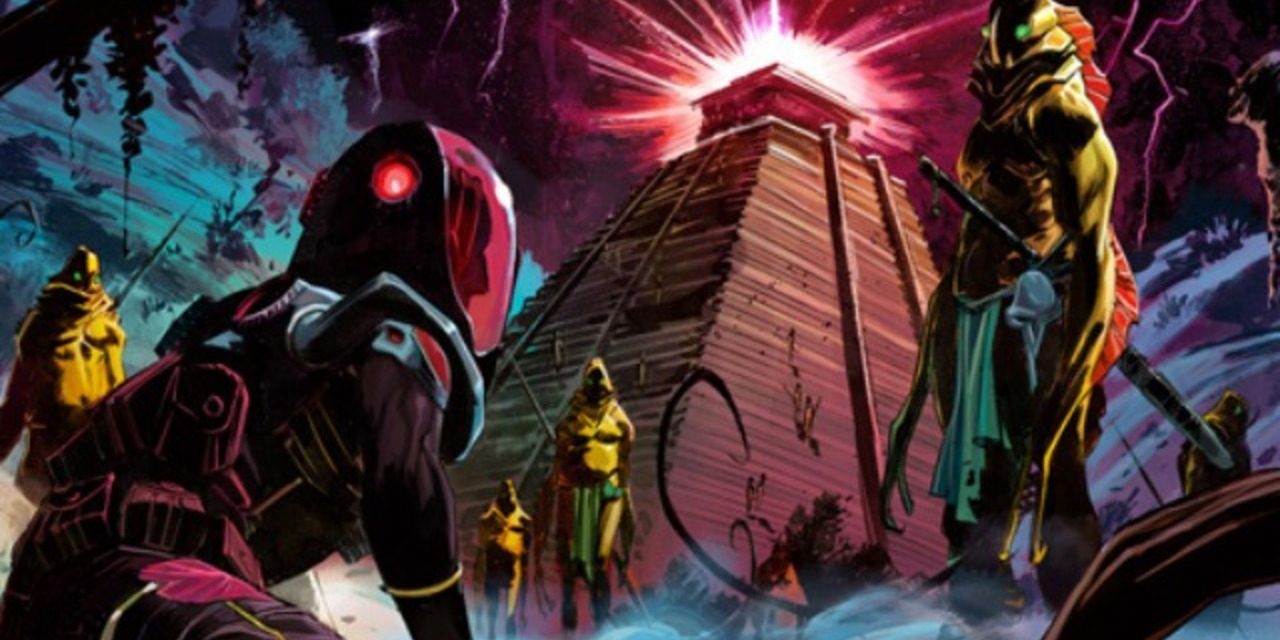 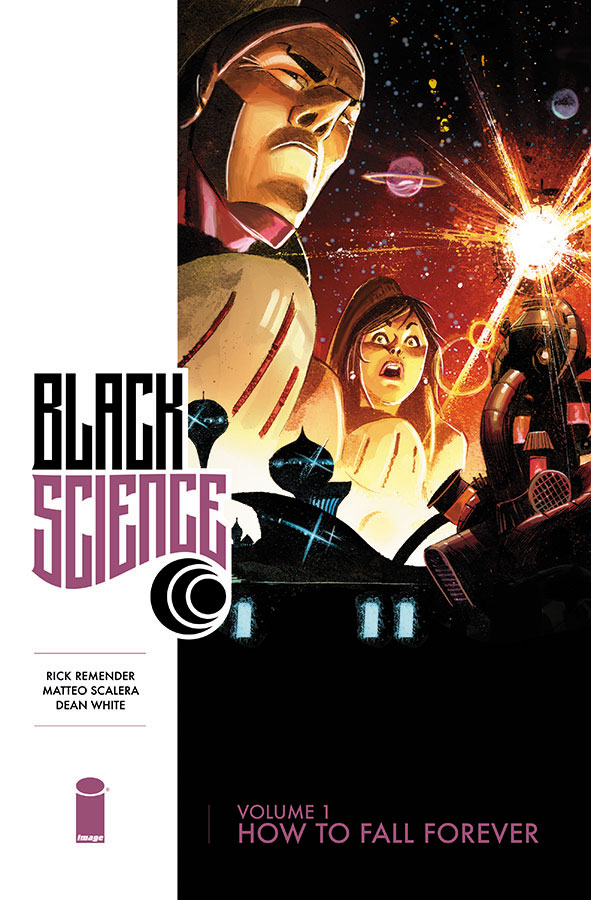 BLACK SCIENCE VOL. 1: HOW TO FALL FOREVER (collecting issues #1-6) starts off with two scientists desperately attempting to escape through an alien landscape from humanoid frog soldiers who alternate between firing off primitive weaponry and shooting electric death beams from their mouths. As spears and arrows cut through their science suits, you are struck with an overwhelming sense of anxiety that predominately haunts the entirely of this collection edition. As with most of his stories, BLACK SCIENCE starts off with writer Rick Remender immediately ripping his hand through your nerd chest, grabbing hold of a concept that you hold dear, and unforgivably shining a uncomfortably realistic light upon it. BLACK SCIENCE is that rare SF story that you’re so completely positive that you’ve experienced before and then you slowly, painfully realize that everything you thought you knew was shit. Each page dares to break every established rule of the genre and holy shit, it’s so much better for it.

While saying BLACK SCIENCE consists of similar elements as DOC SAVAGE, LOST IN SPACE and FANTASTIC FOUR is accurate, doing so will only establish a false sense of security that will only burst into flames the further into the book you get. BLACK SCIENCE follows a scientist by the name of Grant McKay who has recently invented an inter-dimensional transport known as the ‘Pillar.’ Grant decides to invite his family to celebrate his team’s first inaugural jump through the pillar, because that always seems to work out fine. Instead of a controlled jump into a ‘safe’ dimension, Grant and his team find themselves uncontrollably jumping from one dangerous reality to the next. Aside from trying to stay alive in each new outrageous reality, Grant and his crew are desperately trying to repair the Pillar and safely return back to their own dimension. That is, if the frog warriors, spiritually possessed ape priest and advanced cyber Native Americans don’t end up killing them first. With the dangers of each new reality as a continual threat, the real dangers of the book seem to stem from Grant’s own self destructive scientific obsession and the possibility of a saboteur amongst their crew. Think you know how every issue is going to end?  You’re probably wrong. Every time you think you have the story figured out, Remender throws an extreme curve that completely alters the dynamic of the book. Seriously, Vol. 1 ends with me having no idea where the hell this story is going.

While Remender’s storytelling is as brilliant as ever, it’s important that I mention the exquisite artwork of Matteo Scalera. His style has a casual feel to it, while simultaneously coming across as intricate and complex. His ability to conjure up the wild images from Remender’s brain, makes them such a outstanding duo. The coloring of Dean White provides the final piece to each full page masterpiece. Not only will BLACK SCIENCE provide an original spin on already pre-established Sci Fi troupes, it will alter your literary expectations. The moment you start to think you know what is going to happen, is right when you’re handed a fresh slap to your mind face. This book turns you into a glutton for misery.  If I had one complaint about this book, it would be about how severely it toys with my emotions.  The moment I begin to get behind a character, they sacrifice themselves for the good of the team. The moment I think I know who the hero of the book is, I’m proven wrong. The moment I think their adventures are an isolated situation, the universe is expanded exponentially. I fluctuate between hating the main character and believing in the sacrifices he has made for the good of mankind.  Damn.  This book is so good! Seriously, if you love good Sci Fi and want something that will knock you on your ass, you need to be reading this book.