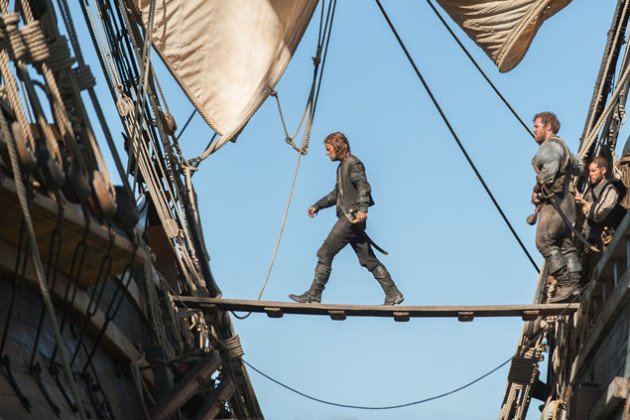 I had a bit of trepidation revisiting BLACK SAILS after the way season one became more and more muddled as the show progressed. Thankfully, my fears have been put to rest for now with the roaring premier of season 2. The episode opens with a massacre and a kidnapping by an unfamiliar pirate crew before picking back up with the major players from season one. Flint (Toby Stephens) and Silver (Luke Arnold) are given a chance to save their necks by helping the crew of their destroyed ship, Walrus, find a way to make some profit out of this venture, and they reluctantly acquiesce to save their own necks. Flint proposes a bold plan not to steal the gold, but rather to steal the warship guarding it, however, things are never that simple for Flint, and he has intentions of turning the tables back in his and Silver’s favor. Meanwhile, Eleanor Guthrie (Hannah New) is doing everything she can to keep things running smoothly in Nassau, which isn’t easy with Captain Vane (Zach McGowan) being an uncaring ass who cares for nothing but himself and a new pirate crew, from the beginning of the episode, with a sociopath captain butting heads with her over the price of their merchandise. The trio of Max (Jessica Parker), Rackham (Toby Schmitz), and Anne Bonny (Clara Paget) are all reeling from their ordeals last season that saw them ripped from their normal lives and stations, so they are trying to find a way to coexist not only with each other, but with all of Nassau, while they try and get back on a solid footing.

What really grabbed my attention in the season premier was how much more action and adventure there was compared to last season. While intrigue is necessary to set up drama and conflict, I’ve always believed a show about pirates should have a higher quota of action and excitement, and I was quite pleased they delivered that this time around. Another positive were the flashbacks about Captain Flint. One of my biggest issues with the first season was the lack of back-story and character development, and it was nice to see that tackled by the show right out of the gate this time around. Add to that the deepening dynamic between Silver and Flint, and I already feel much more interested and invested in this season than the previous one. I was also pleased to see that the writers seem to be deeper entwining certain characters and storylines, such as Max, Rackham, and Anne, which should reduce the number of plot threads and make the show a bit easier to follow. I’m very curious to see what kind of story they are going to run with Captain Ned Low (Tadhg Murphy), the new comer and sociopath whose attitude makes him seem destined to butt heads with most of the major players operating out of Nassau.

BLACK SAILS may have floundered a bit as the first season progressed, but it seems they have reassessed what works and come out swinging with the premier of season two. I haven’t been this excited about a show in a very long time, and I can’t wait to see what they have in store for Flint, Silver, and the other miscreants running amok in the Caribbean.