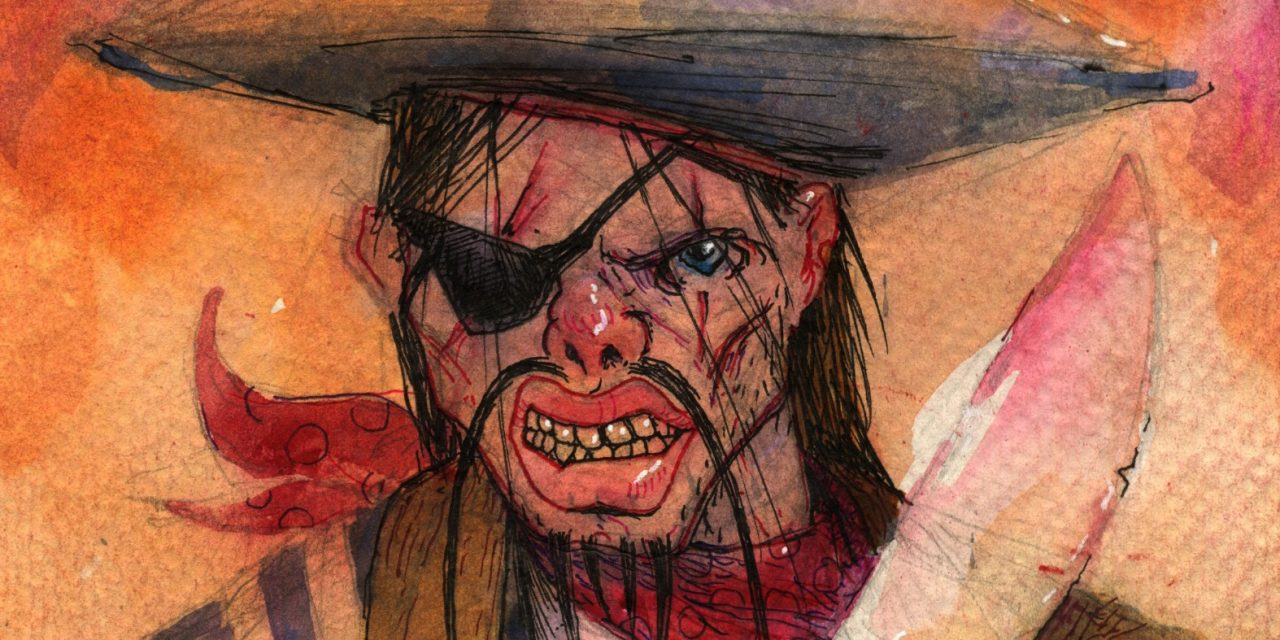 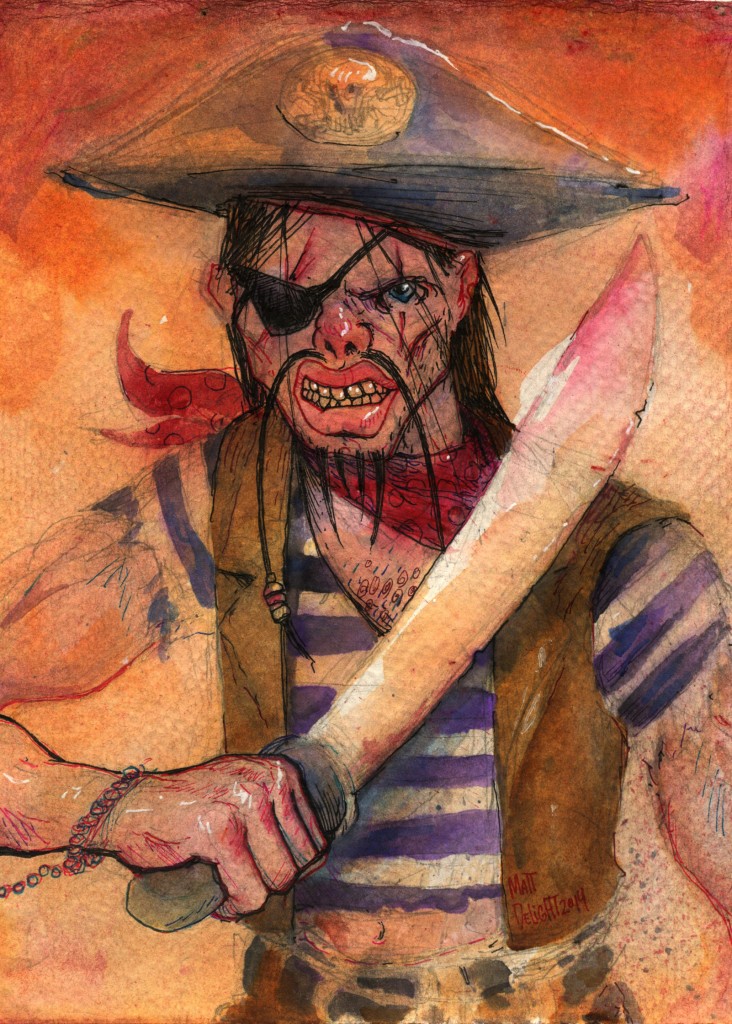 When I was a kid I loved pirates. A pirate was my favorite Halloween costume, one of my favorite movies was a version of TREASURE ISLAND, and I was fanatically obsessed with collecting pirate Legos, so when I heard that Starz was going to be doing BLACK SAILS, a series that acts as a prequel to the events in TREASURE ISLAND, I was extremely interested. The show focuses on three main factions, each containing their own motives and wild cards. The first is Captain Flint and his crew, who sail the Walrus. Flint’s overt goal is to capture the L’urca De Lima, a Spanish treasure galleon, but his personal life, crew politics, outside rivals, and the machinations of John Silver all combine to disrupt or down right stop his plans. The second faction is Captain Charles Vane and his crew and/or devotees. Vane’s main goal is to be the most powerful Captain in Nassau, but scorned lovers, a conniving quartermaster, and his pride and arrogance are far bigger obstacles than he’s bargained for. The last main faction is the Guthries, a family that controls the illegal trade that allows Nassau to operate as an outlaw port. The two main players are Eleanor Guthrie and her father, Richard; both have very different ideas about what Nassau should be, and between their power struggle, the actions of the other two factions, and Eleanor’s tumultuous personal life, the concept of either one obtaining dominance and stability is fleeting at best.

If there is one thing BLACK SAILS can boast about, it has to be the fantastic production values. The show looks amazing, it’s filmed on location in South Africa, which is often used as a stand in for the Bahamas and the Caribbean in general, and small wonder, as it’s absolutely gorgeous, add to this the well crafted sets and costumes, and you’ve got one of the best looking period pieces since THE BORGIAS went off the air. To go along with the great look, the show also boasts some very competent directing. Given the huge scope of BLACK SAILS, it goes without saying that there will be plenty of extreme wide shots, but what caught my attention was how often they chose to go for more intimate mid shots. I feel that the goal in this was to bring the viewer into the story with the characters, and, from a cinematic aspect, this certainly worked.

What didn’t work for BLACK SAILS was the story. While the overall premise for the show is interesting, the show does a poor job of grabbing your attention, and I think this is largely due to too much going on and not enough time to cover it all. There are so many characters in BLACK SAILS that it’s hard to keep track of them, let alone do enough characterization and back story to really allow you to form a connection to most of them. I was constantly baffled as to why I should care about most of the characters and why the show was wasting time on them, and the biggest culprit for me was Captain Vane. Vane, while certainly a text book antagonist, doesn’t seem to have a reason for being underhanded and ruthless outside of pure ambition, but his ambition doesn’t have an end game, so we are left with a character who we don’t care about but who gets a great deal of focus and screen time, the result is frustrating, to say the least.

Given the overabundance of characters, it’s not surprising that there are many plots and subplots going on, in fact, too many. Every character seems to have their own machinations, or to be involved in the machinations of two or three others, to the point that there is so much going on so quickly it’s hard to get attached and involved in any one story arch. The last short coming, from my perspective, is the lack of action and adventure in the show. BLACK SAILS is about pirates, and while there is certainly interesting new ground to cover in examining a somewhat more realistic interpretation of their day to day lives, it doesn’t really make for thrilling television. There are very few ship to ship conflicts, and when they do happen most of the action is either off screen or done so quickly that its not very fun. I’m not sure why BLACK SAILS seems to shy away from the violence, but I do know that’s not the best method for drawing in people who like pirates, which should be their main demographic. It’s bad enough that there is simply too much going on to capture your interest, but its not even tempered with enough swashbuckling to at least hold your attention, and, for a show about pirates, that just seems wrong and poorly thought out.

With such an extensive cast, it comes as no surprise that there are some noteworthy performances in BLACK SAILS. Toby Stephens (TV’s VEXED) fills the role of Captain Flint, and his performance is one of the highlights of the show. Stephens brings a tone of genuine class and sophistication to the notorious fictional pirate, but easily switches to a brutal, conniving, and selfish man out to reclaim what he feels he is owed, giving us a performance that is varied and complex, but above all enjoyable to watch. Eleanor Guthrie is played by Hannah New (soon to be in MALEFICENT), who’s wonderful portrayal of strength, ambition, and vulnerability, make Eleanor one of the most interesting characters in the series. This is the first I’ve seen of New, as most of her previous work has been Spanish, but, based on this intriguing performance, I look forward to seeing more of her in the future. The coveted role of John Silver is played by Luke Arnold (TV’s WINNERS AND LOSERS) and he is a perfect combination of charm and deviousness, giving one of the best true to TREASURE ISLAND representations of John Silver I’ve ever seen. If Arnold continues to deliver this caliber of work, I think he may have a very bright future ahead of him. Zach McGowan (TV’s SHAMELESS) steps into the role of Charles Vane, and while I don’t think much of the character, McGowan plays him with the perfect sharp edge of an antagonist. More so than most people on the show, McGowan looks and sounds like you imagine a pirate would, that, combined with his excellent characterization and delivery, gives us a performance that is far more engrossing than the character he’s portraying. Max, a prostitute and confidant of Eleanor, is played by Jessica Parker Kennedy (TV’s THE SECRET CIRCLE) and she does a nice job with the role. Kennedy plays a character who goes through multiple major changes in the first season, and her performance is solid throughout, constantly rising to the challenge of her character’s tumultuous circumstances. While Max isn’t the most memorable character on the show, I think Kennedy comes close to raising her to that level and I would be disappointed if she left the cast. While these are the more major roles, there are plenty of other characters who occupy lesser positions, and many of their portrayals are spectacular, so don’t be afraid to check this show out if you want to see some great performances from actors who may not be on your radar.

The first season of BLACK SAILS has some positives, it’s a beautiful looking show with great production values and it has a pretty terrific cast of actors. Unfortunately, there are too many story lines going on and not enough character development so it struggles to capture and hold the audiences attention. I hope this show turns around in the second season, because it still has a great deal of potential and I think it could turn out to be something spectacular if it was put into the hands of a better writing team.