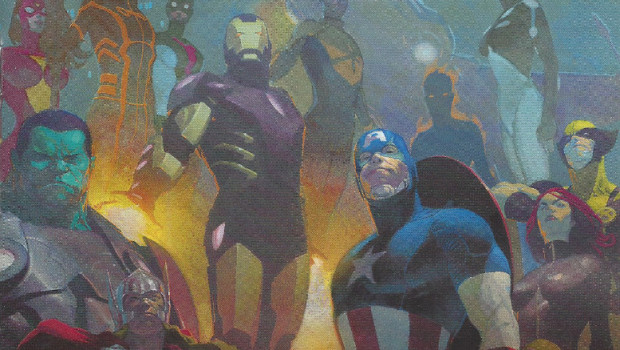 I have some good news and bad news about the first 23 issues of Jonathan Hickman’s run on AVENGERS and its major tie-in event INFINITY (a recent six issue mini series dealing with Thanos). What would you like first? The bad you say!? Well ok, the bad news is that while I appreciated the science fiction themes and a couple of cool moments here and there, it has really not been necessary to read. Seemingly nothing big happened that can’t be summed up by me saying “The Avengers helped win an intergalactic war.” That’s about it. Bummer. Which leads me to the good news. The good news is that Avengers fans who have not read a single issue so far can come right in and not miss a beat. Yeah, this is a new story line starring familiar characters and serves as a true “jumping on” point for those eager enough. The question is; will already established fans of this book want to keep going or are they burnt out? Unfortunately for myself, I’m a little burned.

Writer Jonathan Hickman continues his run on this new story arc titled “Rogue Planet” and is joined by artist Esad Ribic who does a good job at drawing some interesting panels. Nothing that will tickle your tit bones or anything, but sufficient enough. Hickman’s story here is consistent with what he has been giving us, I’ll give him that. He is dead set on making an Avengers science fiction epic. But I fear he comes across as someone who really likes a good science fiction story but doesn’t really know how to keep the interest levels up. He has moments of brilliance that are over-weighed by sheer boredom. This may all sound a bit harsh, but I’m being honest here. I’m just bored with these Avengers stories. I loved Hickman’s first arc on NEW AVENGERS which proves to me he can do all this science fiction stuff right within the Marvel universe, but it’s just not consistent enough and filled with too many throw-away issues that don’t progress the plot anywhere all that interesting. I would suggest making a rule for Hickman that says if you have an idea for 24 issues of a comic, do it in 12. Then we may be on to something! The butter is just spread too thin.

The other issue here is the sheer number of characters involved. There are just way too many and that was one of my sticking points during issues #1-23. I will admit the exclusion of Wolverine and Spider-Man in this issue was most welcome and made up for some of my frustrations. I like to think that it’s a sign Hickman is listening to his fans. Less is more. The best stuff here are the conversations between Iron Man and Captain America because it’s focused and adds depth. Whenever another character is on the page they just get a second to shine or say something short and trivial just to let us know they are still there. Having 20+ characters in an Avengers book may entice some, but not me. Give me a handful of say 6-8 and we’ll be in business.

That said, this new story arc alllllmost hooked me again, but it just feels too familiar. A “fool me once” kind of scenario. If I didn’t read the past 23 issues, I may just have been “in” here. But in all truth, I think I’m “out”. There are definitely a few twists in this issue that may hook some (I won’t spoil them here for the curious), but it just wasn’t enough to win me over. Hickman is a fine writer with a lot of talent for sure (Check out NEW AVENGERS!), and Ribic does a great job on the art, but at the end of the day (and this issue), I think I need to sit out of the battle for awhile until something fresh and new graces the pages of this AVENGERS book.

In the San Francisco area looking for your next AVENGERS comic book fix? If so, Check out MISSION: COMICS & ART. They’ve got you covered!