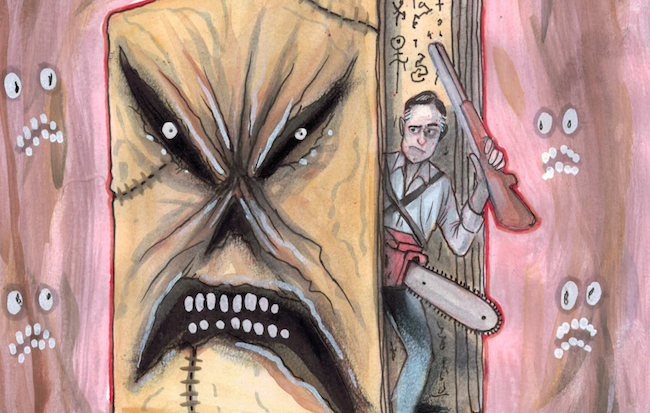 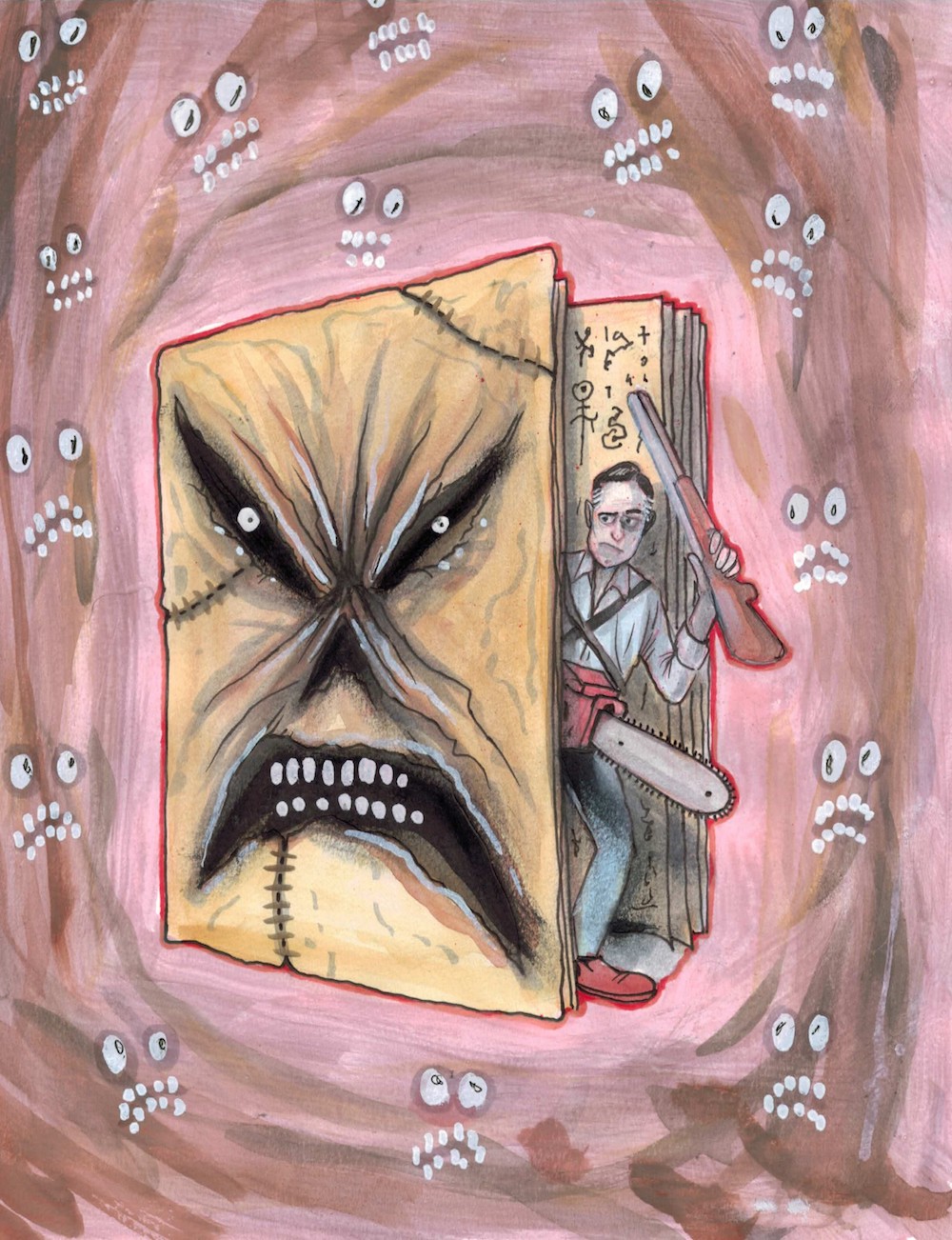 The grooviest show on Starz returns for more hilarious demonic mayhem with ASH VS EVIL DEAD season 2.  The season opens with Ruby fleeing from her demonic children, and in an act of desperation casts a spell to summon Ash.  This puts a kibosh on Ash’s, Pablo’s, and Kelly’s life of leisure in Jacksonville, Florida, as deadites start to pop up at the party and completely ruin the atmosphere.  Ash and crew head back north to figure out what is going on, but Pablo is having intense daydreams of evil things that has him worried the Necronomicon isn’t done with him yet.  The search leads them back to Ash’s home town, where he is a vilified figure known as Ashy Slashy who is believed to have murdered his friends in cold blood, so it is a less than pleasant homecoming for him.  Eventually they find Ruby and she explains that her children have rebelled and she needs Ash’s help to recover the Necronomicon and stop her children before they unleash god knows what on the earth.  Now they all must battle the children, deadites, local law enforcement, and even a demon in an effort to set things right and destroy evil once and for all.

The story telling in this season does an great job of building off the first season and taking it to fun new places.  I particularly liked the dynamic between Ash and his team working with Ruby and Ash dealing with his past by returning to his home town.  The hometown dynamic allowed the show to address the fact that Ash is always surrounded by death, and how that looks to an outside observer, giving us a premise that resulted in plenty of comedy and conflict.  Also, Ruby becoming an ally, albeit an untrusted one, set the show up to have more divergent, simultaneous storylines running with the main characters, which aided in keeping the audience engaged.  Lastly, there was an episode that takes place in an insane asylum and it was one of the more fun and original ideas the show has had and it opened up some interesting story ideas that long time fans were sure to love.

The production values remained a highlight of the show in season two of ASH VS EVIL DEAD, giving us the over the top horror we’ve come to love and expect from the series.  The show prides itself on using practical effects whenever possible, giving us great looking gore and violence that, while not always 100% realistic, is real enough to make you laugh or squirm, depending on the context of the scene.  One of the more fun effects this season was Ash’s car getting possessed and going on a murderous rampage; I loved the way they managed to give the inanimate object a personality through its headlights, hydraulics, and driving habits, creating an interesting antagonist that seem ludicrous but could still be scary.  The camera work was well handled this season as well, as they used plenty of low and high angles to emphasize the power dynamics at play in various scenes and to ratchet up the tension.  They used lighting to do the same thing, combining it all to create excellent atmosphere that really allowed you to feel the eeriness of the various locations used throughout the season.

One of the reason I will always come back to this show are the performances because, while they may not be award caliber, they are certainly super fun and entertaining.  Bruce Campbell (TV’s FARGO) reprises his role as Ash Williams, the one handed, womanizing, arrogant demon slaying machine.  Campbell is a hoot to watch and he seems to have as much fun playing the part as the audience does watching his performance; his over the top emoting combined with the ludicrous happenings of the story combine for a truly hilarious delivery that will keep you laughing throughout the mayhem.  Continuing on in the role of Pablo is Ray Santiago (SEX ED) and I like what he does with the role this season.  Pablo has gone through some terrifying experiences and he keeps having waking nightmares as a result, but he is also trying to be strong and conquer his fears, and Santiago does a convincing job of melding these two extremes, seamlessly going from frightened and meek to bold and brave and back again.  Dana DeLorenzo (THE MAD ONES) returns to the role of Kelly and while the character didn’t have a whole lot of growth this year, she continued to deliver a solid performance.  I was particularly impressed with her portrayal of Kelly’s rage and annoyance at other people not understanding the truth of what is going on, as it came off as completely believable.  Lastly, Lucy Lawless (TV’s SALEM) delivers a stellar performance as Ruby, the antagonist turned ally of the group.  Lawless is wonderful as the baddie turned helper, infusing the character with a healthy amount of disdain and superiority but tempered with a some fear as she knows what they face, giving us a very fun character who I hope stays around for awhile.

Season two of ASH VS EVIL DEAD delivers more of the hilarious demonic mayhem and hilarity that fans have come to expect.  The plot takes us new places and pushes us through more of the tropes of the films, the acting is quite fun, and the production values remain solid.  If you’re in the mood for some fun horror or just looking to laugh, then this show is definitely for you.