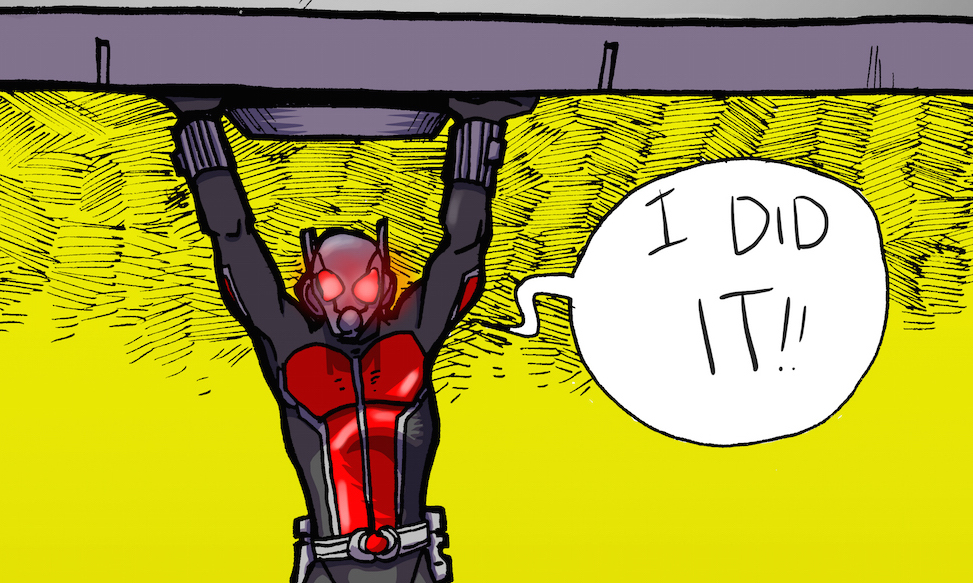 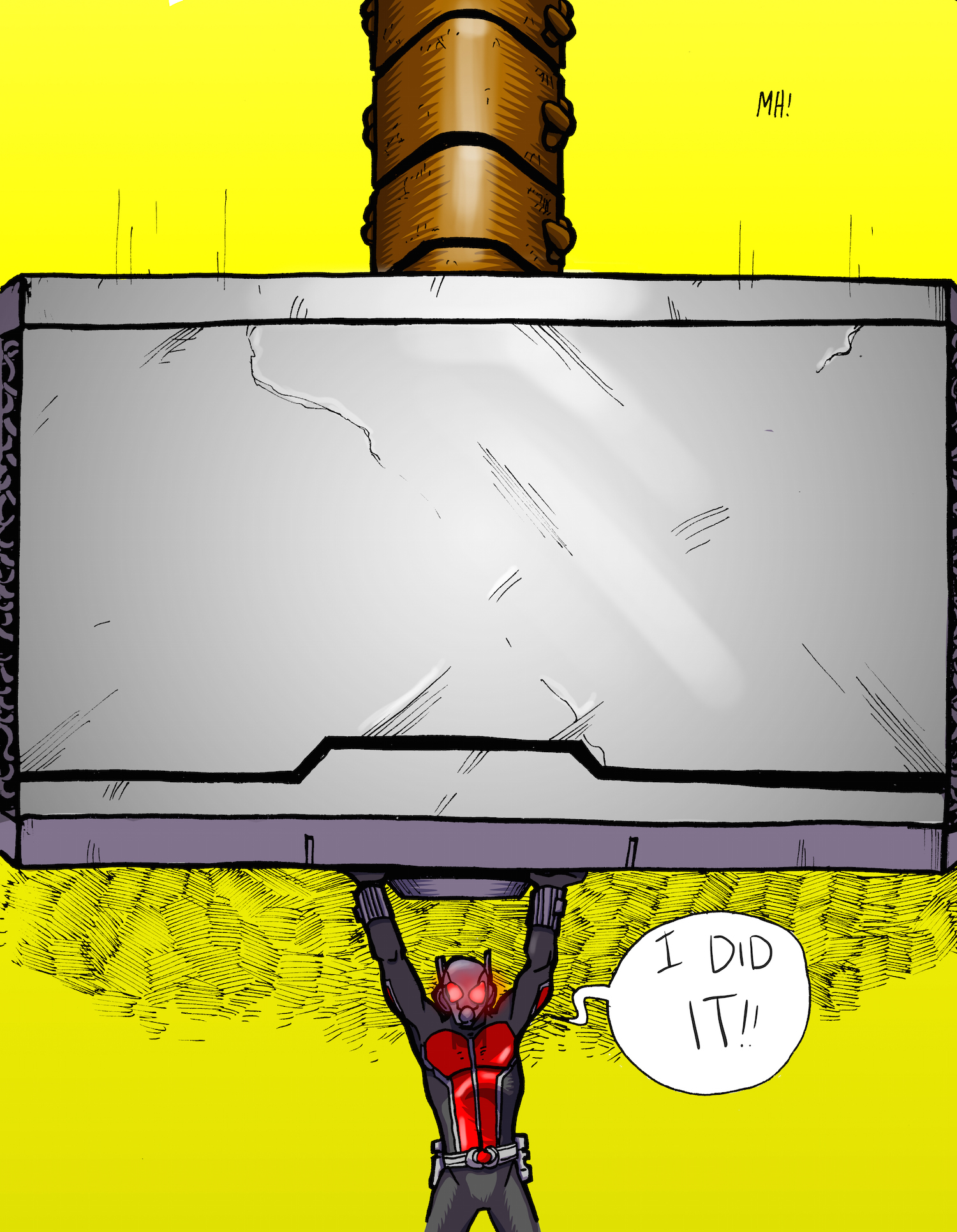 WARNING: A Very Major Spoiler is ahead.

I would like to say that Marvel’s newest contribution to the cinematic universe is a bit of an oddball for them, but after a film with a talking racoon and a dancing tree, I don’t think that statement is quite appropriate.  Regardless, Marvel’s ANT-MAN, helmed by Peyton Reed (YES MAN), is a departure from the recent over the top superhero films, as it focuses on an everyman in need of redemption and has just as much heart as it does laughs.  The movie centers around Scott Lang, an ex con who is desperately trying to find a way to be in his daughter’s life while struggling to lead an honest existence in a world where ex cons have few opportunities, regardless of their skills.  After backsliding and taking part in a robbery his world gets flipped upside down by Hank Pym, a genius scientist who is in desperate need of help if he is going to stop his greatest creation from falling into the hands of the military industrial complex.  The creation in questions, Pym particles, has the ability to change the distance between molecules, meaning it can change the size of objects.  Now Lang, Pym, and Pym’s daughter, Hope, must team up to stop Hank’s former protege, Darren Cross, before he puts world domination on an auction block in a petty bid for profits, pride, and revenge.

One of the highlights of ANT-MAN is the terrific writing.  The script was primarily penned by Edgar Wright (THE WORLD’S END) and Joe Cornish (THE ADVENTURES OF TINTIN) with help from Adam McKay (ANCHORMAN 2: THE LEGEND CONTINUES) and Paul Rudd (THIS IS THE END) and this winning combination fill the film with great laughs, touching moments, and enough action to slate even the most jaded comic book movie fan.  The writing team does a great job with characterization for the most part, building up characters that are well developed and while they may not be overly complex, they are certainly relatable.  Scott and Hank are particularly well crafted, as both men are searching for redemption, but coming from far different places, giving us the perfect premise for chemistry and character growth.  The only real problem I had with the writing was with Darren Cross, the villainous CEO who forced Hank out of his own company.  Cross’ motivations are never crystallized enough for me, yes, he does do plenty of reprehensible things, but am I really supposed to buy that his entire motivation behind it is because he was slighted by his mentor?  Additionally, the film crescendos with a big reveal when Cross traps Ant-Man and explains that he knows what Hank has been planning, but he never explains HOW he knows what Hank was planning, leaving a painfully large plot hole in the middle of what is an otherwise brilliant film.

While Marvel films are known for great production values, I really enjoyed how ANT-MAN was shot and the great effects they used in it.  I was a bit surprised by the great directing in Ant-Man, particularly when it came to the action and training sequences, because while Reed doesn’t have an action background, he certainly had the talent to step up and knock it out of the park.  The changing size dynamic makes for interesting battle sequences, so while the action tends to run at a steady pace it feels like it is going from fast to slow and back again as the hero’s size changes and the visuals often change accordingly.  Despite these visual changes it was always easy to follow what was going on, even when it was fast paced, which really allowed you to get sucked into the movie and feel like you were a part of the caper.  One of my favorite elements of the film was how realistic they made the ants look; whether large or small, any time they were on the screen they seemed very real, and while I’m sure they were at times, the sheer way they did the interactions between them and Lang was both impressive and fascinating.  Add to this the wonderful visual effects from the technology Creed cranks out and you have some truly exceptional visuals that are sure to entertain.

When it comes to acting, Ant-Man is one of those rare exceptions where everyone in the film is exceptional.  Taking on the role of Scott Lang is Paul Rudd, and while I am not typically a fan of his work, he quite impressed me with his performance.  Lang is a man whose brilliance is only rivaled by his poor decisions, and Rudd nails him by combining just the right amounts of humor, heart, attitude, and bravado, giving us a performance that I’m sure will go down as one of the best from the second phase of the Marvel cinematic universe.  Michael Douglas (LAST VEGAS) plays Hank Pym, and he is delightful.  Douglas excels at playing brooding characters, which is perfect for Hank, but he also adds enough smart ass to the part to make him fun and approachable.  Douglas and Rudd have great chemistry together, and their interactions and banter are some of the most entertaining moments in the film.  Hope Van Dyne, Pym’s daughter, is played by Evangeline Lilly (THE HOBBIT: THE DESOLATION OF SMAUG) and she nails the role.  Hope is a pile of resentment and resolve, her frustration towards her father is only matched by her desire to stop Cross, and Lilly makes her the blistering powerhouse she needs to be, giving her the right amount of strength and venom while still hinting at the warmth underneath it all.  Ever since House of Cards I’ve been waiting for Corey Stoll (TV’s THE STRAIN) to do another role that would impress me, and it just might be Darren Cross.  While I was a bit disappointed in the way Cross was written, I very much enjoyed Stoll’s portrayal because he makes him cold, smarmy, arrogant, and unbelievably self centered, all perfect traits for a comic book villain.  I hope this role garners him some more attention, because I think he is one of the most underutilized actors working today.  Lastly, Michael Peña (FURY) fills the role of Luis, Lang’s former cellmate and now roommate who also happens to be a goofy but tough as nails thief.  Peña is a scene stealer thanks to his perfect delivery and the goofy but believable way he plays Luis, giving us a great character portrayal that adds the right amount of laughs and humanity to the film.

While Ant-Man doesn’t sound like the best character to bet on for box office success, Marvel, Reed, the writers, and cast all combine to give us one hell of a great comic book movie.  The writing sparks, the acting is top notch, and the visuals are sure to blow your hair back.  If you like Marvel, any of the actors, or are just in the mood for a movie that is as fun as it is entertaining, then head on out to a theatre and give Ant-Man a watch, you’ll be glad you did.