AMAZING X-MEN #1 and #2 Comic Book Review: Nightcrawler is Back! 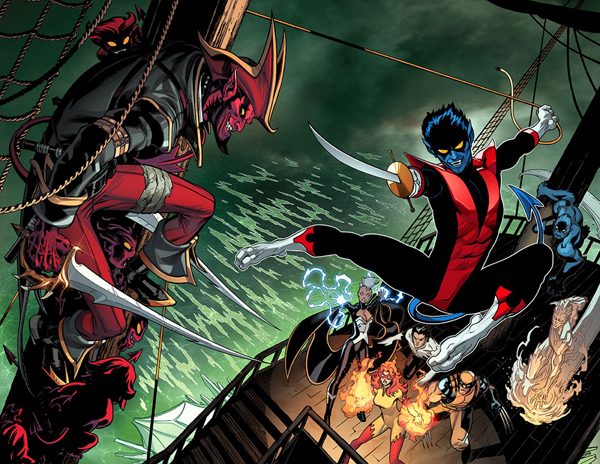 It’s such a cheap move to kill off a character, and then bring him back to life. How can readers not feel completely manipulated? Aghhh! Superman is going to die! Everyone! Buy the last issue ever of SUPERMAN! Yes! Boost sales! Top the charts! Because he’s dead… psych! He’ll be back in 3 months. I don’t know if the folks at Marvel were planning all along to resurrect Nightcrawler, or if they killed him off and realized, “Doh! Why did we do that?” And then tried to rectify their mistake by creating that other-dimension Nightcrawler in X-FORCE. And then realized, “But ugh, he’s just not the same,” and then decided to bring back the real Nightcrawler.

Either way, I don’t really care because while AMAZING X-MEN #1 completely offends my resurrection moral code, I have to say that I am completely excited by Nightcrawler’s return!

The wrap-around cover was enough to make me snatch this issue off the shelf. The swashbuckling Nightcrawler on a pirate ship facing off against a marauding Azazel made me squeal. Ed McGuiness’ art, along with Dexter Vines’ inks and Marte Gracia’s gorgeous colors, looks fantastic. The ongoing pirate theme of this story is really just perfect.

I’ve been enjoying Jason Aaron’s writing on WOLVERINE AND THE X-MEN, and this issue feels like an extension of that series. It takes place with the same cast of characters at the Jean Grey School for Higher Learning – with the addition of Firestar. And damn, if that girl just doesn’t bring back warm nostalgic feelings of SPIDER-MAN AND HIS AMAZING FRIENDS. If you like the quippy banter that seems to permeate a lot of the Marvel universe these days, you’ll appreciate the dialogue in this issue.

The plot, though hokey in some respects, sets up a pretty excellent pirate-themed conflict. It’s an awesome chance for Nightcrawler to play the swashbuckling sword-wielding hero. I almost started cheering out loud when Nightcrawler throws off his robes and starts swinging swords at the bad guys. Plus, the mystery behind all those crazy Bamfs at the Jean Grey School finally gets solved.

So yes, while I am fully aware that Marvel, like a bad boyfriend, may very well be toying with my emotions and manipulating me with this Nightcrawler comeback story arc, I really don’t care! I am loving every page of this comic so far! Bamf!

After the exciting and excellent first issue of AMAZING X-MEN, issue #2 is a bit of a let down. The team has been teleported to two separate locations, and the issue flips back and forth between Wolverine/Northstar (in heaven) and Storm/Firestar/Iceman (in hell). Everyone’s being attacked by demon pirates and the story feels more like a buildup to the real action that will be happening in issue #3 (hopefully) and onward.

In addition to the mediocre story, the art seems to have suffered as well. Overall, it looks the same as issue #1, but there are some panels where Storm’s face and boobs look kind of weird. Don’t know what’s up with that, but it was a bit distracting.

SPOILER ALERT!!:  I’ll also comment here that I’m not sure how I feel about the appearance of Professor X. Ok, yes, Cyclops fried him during the whole AVX storyline so I guess, like Nightcrawler, he’s in heaven. But ugh! Why does Professor X have to appear and start giving cryptic Dumbledore advice to Wolverine and treat him like some kind of Harry Potter? And does that mean that he’s going to be resurrected too? Sheesh, at least let him be dead for a couple of years.