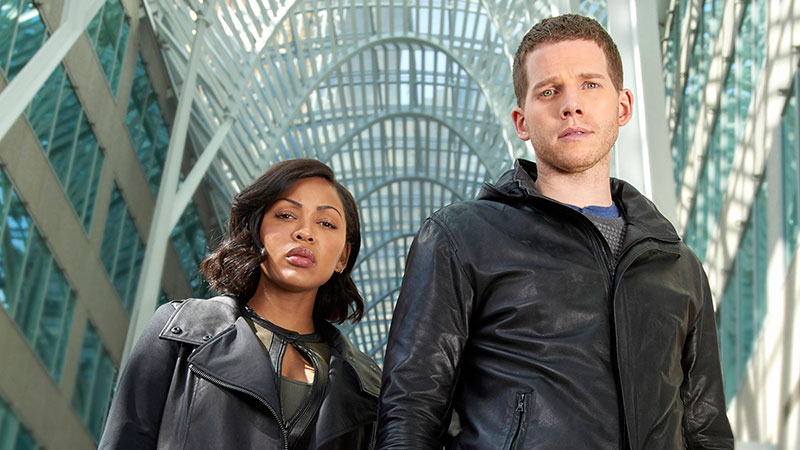 Next season’s televisions shows are crashing down upon us!  Most stations (channels? broadcasters?) have begun releasing trailers for their upcoming events and there’s some… um… interesting ones in the mix.  Being that we are a NERD site, consisting of a bunch of rabid nerds, some trailers stuck out more than others. Here’s a quick breakdown of what’s in store for us next season!

Official Synopsis:
Based on the international blockbuster film by executive producer Steven Spielberg and the first of his films to be adapted for television, MINORITY report follows the unlikely partnership between a man haunted by the future and a cop haunted by her past, as they race to stop the worst crimes of the year 2065 before they happen. Set in Washington, D.C., it is 10 years after the demise of Precrime, a law enforcement agency tasked with identifying and eliminating criminals…before their crimes were committed. To carry out this brand of justice, the agency used three precogs – “precognitives” Dash, Arthur and Agatha – who were able to see the future. Now, in 2065, crime-solving is different, and justice leans more on sophisticated and trusted technology than on the instincts of the precogs.

I can’t help but wonder if Marvel’s ever expanding universe has drastically influenced network television executives? There seems to be this new trend of launching TV shows that aren’t exactly reboots of popular movies or franchises, they are continuations of them. Thus expanding on an already established universe and not so much starting over from scratch.  I don’t know, maybe I have too much ULTRON and AGENTS OF SHIELD on my brain.  Anyway, my first impression of MINORITY REPORT?  I don’t know.  It feels too much like the over used concept of the ‘by the books police detective’ teams up with the ‘eccentric supernatural/hyper brilliant train wreck’ to solve crimes.  I really enjoyed the movie, but, this show feels a bit too much like DARK ANGEL, SLEEPY HOLLOW and PERSON OF INTEREST for my liking.  Which is both a good and a bad thing…

Official Synopsis:
Seventy-five-year-old JIMMY PRITCHARD (guest star Philip Baker Hall, “Modern Family,” “Magnolia”) is a shell of his former self. A drinker, a womanizer and a father who always put work before family, Pritchard was forced to resign as L.A. County Sheriff for corrupt conduct more than a decade ago. Now, some 15 unkind years later, he is killed when he stumbles upon a robbery at the home of FBI Agent DUVAL PRITCHARD (Tim DeKay, “White Collar”), one of his three children. But death is surprisingly short for Jimmy, who is brought back to life by billionaire tech-genius twins MARY GOODWIN (Dilshad Vadsaria, “Revenge”) and her brother, OTTO (Adhir Kalyan, “Rules of Engagement”), founders of the social networking empire, Lookinglass. Resurrected as a younger version of himself, with physical abilities of which he never dreamed, a re-animated Pritchard (Rob Kazinsky, “True Blood”) is given a second chance at life. What will he do with it? Will he seek vengeance against those who killed him? Will he try to repair the damage he did to his family? Will he embrace a new sense of purpose or fall prey to old temptations?

Eh?  I mean, it’s a cool idea… But, I really don’t know if it’s a good enough concept to last for several seasons?  The idea of him having to recharge his FRANKENSTEIN bones every 24 hours is going to get boring really fast.  Poor premise.  Me no hooked.  Tell Mark why he be interested. Who bad guys?  FIRE! BAD!

Official Synpopsis:
Based upon the characters created by Neil Gaiman, Sam Kieth and Mike Dringenberg for DC Entertainment’s Vertigo imprint, LUCIFER is the story of the original fallen angel. Bored and unhappy as the Lord of Hell, LUCIFER MORNINGSTAR (Tom Ellis, “Merlin”) has abandoned his throne and retired to L.A., where he owns Lux, an upscale nightclub. Charming, charismatic and devilishly handsome, Lucifer is enjoying his retirement, indulging in a few of his favorite things – wine, women and song – when a beautiful pop star is brutally murdered outside of Lux. For the first time in roughly 10 billion years, he feels something awaken deep within him as a result of this murder. Compassion? Sympathy? The very thought disturbs him.

I LOVE this comic.  One of the few Vertigo books that I actually followed to the end.  The comic ended up getting, pretty dense.  With Lucifer deciding to create his own universe where he was the God and only inviting a select few along for his creation.  My impression is that the show is barely going to scratch the surface of the comic mythos.  Which makes sense for a basic television show about the friggin’ devil doing good here on Earth.  I’ve always been a fan of modern fantasy interpretations of biblical characters.  Ever since reading PARADISE LOST, I’ve always been intrigued by the notion of Lucifer being more of a hero than a villain.   Hail Satan.

NEVER ENDING RADICAL DUDE’S Mike McG does an excellent job of summing up this trailer.  I guess after seeing shows like FLASH and ARROW knock it out of the gosh darn park, seeing a SUPERGIRL show that feels similar to early failed DC projects is a little disheartening for me. The CW shows feel like they represent this new age of DC live action that totally gets how to hook an audience.  All their properties on different stations feel like they are going to fall into the same trappings as their previous failed shows. SUPERGIRL has that BIRDS OF PREY vibe and I’m afraid the only reason people will be tuning in each week, is because they are hoping for that Superman cameo that will never happen.  You can’t base a TV show on a character is that is off to the side of such an iconic figure and expect people to keep tuning in after episode 4. Meh.

Official Synopsis:  One moment links 8 minds in disparate parts of the world, putting 8 strangers in each other’s lives, each other’s secrets, and in terrible danger.
All ​12 episodes of the global dramatic thriller will launch Friday, June 5 ​only on Netflix​From the creative minds of The Wachowskis (“The Matrix”​ trilogy,​ “Cloud Atlas”)​ and J. Michael Straczynski (Clint Eastwood’s “Changeling​,” ​”World War Z”), as well as Grant Hill (“The Matrix” trilogy, “Cloud Atlas”)

How about NETFLIX coming out with some of the best NERD shit on TV? … I mean on computer?  Phone?  Tablet? This show looks outstanding!  And… hold on to your butts, it’s actually an original concept that isn’t pulled directly from a movie, comic book or novel.  SayWHAAAA?  It looks like it has the Wachowski stank all over it and I love me some Wachowksi madness!  It’s still too soon to tell if this is going to be the next MATRIX or the next MATRIX:  REVOLUTIONS.

Official Synposis:  Based on the 2011 feature, Limitless follows Brian Finch as he discovers the power of the mysterious drug NZT. In this new drama from executive producer Bradley Cooper, explore what happens when a man unlocks his limitless potential.

Wait.  Was that friggin BRADLEY COOPER?  Wut.  Okay, so, I wasn’t expecting that.  This goes along with what I was saying about MINORITY REPORT.  LIMITLESS doesn’t appear to be a reboot or a re-imaging of the Bradley Cooper movie or the Alan Glynn novel, THE DARK FIELDS, it’s a television show that is going to expand on the already established universe of the 2011 movie. Bradley Cooper seems to be reprising his character ‘Eddie’ and is now serving as a sort of mentor to someone he has chosen to bestow the powers of NZT upon.  Just like MINORITY REPORT, this show is using the concept of a police officer teaming up with a brilliant mind to solve crimes.  CASTLE?  NUMBERS? Serious, the list goes on and on. IZOMBIE, ELEMENTARY? SHERLOCK? BEING HUMAN, FRINGE… SO MANY.  But, I guess it works so why switch things up?  I was a huge fan of the book and the movie and I think the concept has enough steam to sustain it.  I just hope the writing is as smart as the main character…

That’s a quick break down of some of the shows you can expect this fall on various TV stations.  Which ones are you excited about?