300: RISE OF AN EMPIRE Movie Review 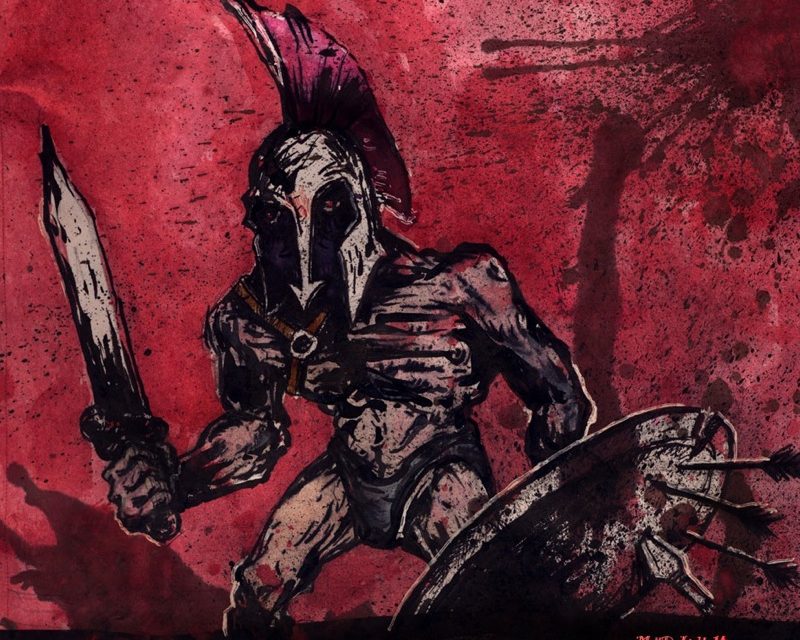 I feel like a Victorian damsel vigorously fanning herself on a particularly sweltering Georgia afternoon.  The vapors. I got em.  My word… Quick! Get me a bucket of yellow jackets and 30 White Castle burgers! That oughta knock these sinful longings from my nether regions. Lordy.

Okay, enough of that tom foolery. I should start this off by saying that If you came to this review hoping to find some particularly illuminating insight regarding the deeper meaning of this movie, then, I’m afraid you’re completely out of abs.  There’s really not a lot going on beyond it’s crusty bloody surface. At least, nothing has allegorical or penetrating as Zack Synder (SUCKER PUNCH, MAN OF STEEL) would have you believe. As one character so shrewdly points out “You’ve come a long way to stroke your c*ck while watching real men train.” At least we get some popcorn and a refreshing Coca Cola with our view.

300:  RISE OF AN EMPIRE can’t really be called a sequel.  Nor can be called a prequel.  (Is there such thing as a sideways sequel?) This movie is practically what’s happening while King Leonidas and his 300 Spartans are fighting the Persians at Thermopylae. While the rest of the world waits to see how well the Spartans fair against the super bald ‘God-King’ Xerxes, a Greek warrior by the name of Themistokles attempts to unite the empire and prepare for the devastating tidal wave of the Persian Empire, which is  lead by the ‘God-King’ Xerxes and his adopted/kinda sorta sister Artemisia. We learn that Themistokles is responsible for firing the arrow that killed Xerxes’ father, King Darius, and basically helped born the brutal reign of the God-King Xerxes.  (Sidenote:  If you do a shot every time they say ‘God-King,’ you will be dead in 20 minutes.) The Greek empire, especially the Spartans, refuse to accept that the Persian Army will truly be as devastating as Themistokles predicts and refuses to unite. So, naturally the Persians Empire hopscotches their way across the empire and burns everything in their path. Which leaves Themistokles and his small band of ‘farmers and draftees’ to outsmart the brilliant naval tactician Artemisia and her unstoppable Persian fleet. Can you guess what happens abs?

I think the thing that people will find most confusing about this movie is how not bad it is. I don’t want to say that’s thanks to Zack Snyder.  I really don’t. In fact, I will place blame for the overly complicated plot points squarely on his shoulders. The man knows how to craft a beautiful action scene; he definitely does not know how to draft an articulate story with proper pacing.  (For more on Zack Snyder unbalanced cinematic approach, check out Jason Furie’s movie review of SUCKER PUNCH article) This movie tries it’s best to keep you up to speed on whats going on, but, does a pretty bad time at spelling it out clearly. ‘Are Persia and Greece the same thing?’  ‘What was the war 10 years ago about?’ ‘Wait, has it been 10 years since the first movie or 10 years from some other war?’ ‘Wait, this movie isn’t about Spartans?’ ‘Does this movie take place over a weekend or a decade?’ ‘Who were the Greeks that attacked Artemisia?’ TOO MUCH. Maybe I went in and didn’t free up enough processing power in my brain because I didn’t think I would need it… All I know is, once they started naming all the different territories of Greece, I realized I had no idea where the hell Sparta fit into all of this.  Is Sparta part of Greece?  I guess its its own thing.  Right?  I don’t even know. Zeus?

Despite my inability to retain ancient geography in my caveman brain, this movie was way more fun than I was expecting. The basic basic premise is simple enough.  ‘Two countries at war.  One has the numbers,  the other is rascally. Also, there’s some Spartans doing some stuff over there.’   Naturally, the slowed down fight scenes are beautiful and fun to watch.  The opening 5 minutes will have you hooked and ready to go.  This movie was filmed with 3D in mind.  I didn’t even see it in 3d and I left covered in digital blood.  There’s an out-of-nowhere sex scene that kind of rattled my sandals and dropped a hush over the audience. Eva Green (CASINO ROYAL) is brutal and brilliant in this movie. It’s good to see Lena Headey (DREDD, GAME OF THRONES) back as the warrior wife of Leonidas.  The original 300 do make appearances in this movie, but, only as flashbacks/flashsideways and through stock footage.  This movie gives you enough of what you liked in the first movie, but, never really knocks the original off his cult throne. It is definitely a sequel, worthy of your abs.

OH! Also, you definitely need to watch the original 300 before you see this movie.  Or, in my case, immediately after.  I doubt it’s a spoiler if I tell you that the beginning of the original 300 film is practically the ending of 300:  RISE OF AN EMPIRE. They bring back a bunch of characters from the first movie that you wouldn’t have remembered were even in the first movie if you hadn’t watched it recently. For instance, the ‘I AM SPARTA’ foot to the chest guy is actually the same guy who trains Artemisia.  I like things like that.  It shows how intertwined and mucky the opposing sides are. It definitely gives this movie a little extra level of credibility. Not that it needed it. I mean, it’s practically a perfects abs. Also, Michael Fassbender (X:MEN FIRST CLASS) is in the original movie with crazy long blond hair.  Totally forgot about that. Totally… forgot.. about that..

SERIOUS MOMENT WARNING:  There is an element of this movie that I would like to discuss that might be a little uncharacteristically heavy, but I feel needs to be addressed…Why is that most movies that exhibit a powerful and/or vengeful female lead need to position them as a survivor of sexual abuse? Artemisia’s destiny was written the moment a Greek platoon invaded, raped and murdered everyone in her village.  She was then sold to a slave ship, where the brutal pattern continued, until she was finally discarded and left for dead on a Persian street.  She was then rescued, trained and drafted into the Persian army and began her quest for revenge. I understand that such a terrible path would burn a significant level of intensity for revenge within her.. but, I just feel like its lazy and uninspired writing. A strong female character can have an extreme loyalty to her country and ruthless desire to see her enemies destroyed, without having been brutalized for most of her adolescent life.  I mean, it’s not like every male character was fueled by a traumatized childhood.  Honestly, most of the men in this movie were motivated by nothing more than a desire to defend their homeland and take their shirts off.  END OF SERIOUS MOMENT