The PACIFIC RIM Trailer is Here and it Owns! 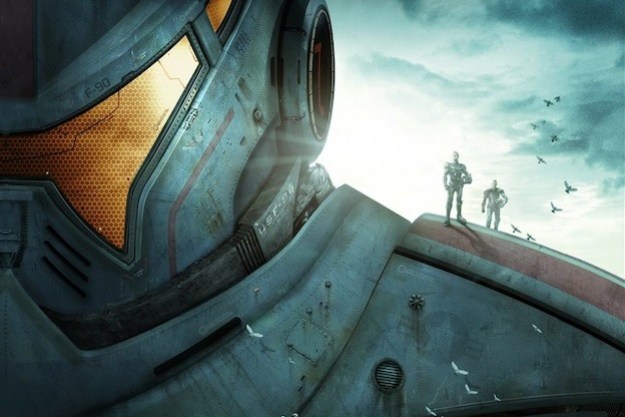 After patiently waiting and speculating for months (years?), the first official trailer for Guillermo Del Toro’s (HELLBOY, PAN’S LABYRINTH) epic Monsters vs Robots film PACIFIC RIM has hit the web. Let me say one thing right off the bat; this trailer does NOT disappoint. This trailer came at a point when I thought I had already reached my goose-bump limit for the week after new MAN OF STEEL trailer. I love monster movies and I love giant robot movies AND this one has both dammit! So cool. Without further ado, check out the official plot synopsis along with the glorious trailer below.

When legions of monstrous creatures, known as Kaiju, started rising from the sea, a war began that would take millions of lives and consume humanity’s resources for years on end. To combat the giant Kaiju, a special type of weapon was devised: massive robots, called Jaegers, which are controlled simultaneously by two pilots whose minds are locked in a neural bridge. But even the Jaegers are proving nearly defenseless in the face of the relentless Kaiju. On the verge of defeat, the forces defending mankind have no choice but to turn to two unlikely heroes-a washed up former pilot (Charlie Hunnam) and an untested trainee (Rinko Kikuchi)-who are teamed to drive a legendary but seemingly obsolete Jaeger from the past. Together, they stand as mankind’s last hope against the mounting apocalypse.

AHHHHHH! I can safely say that this is one of the coolest movie trailers I have seen in a very long time! My jaw dropped, my goosebumps erupted, and I clapped at the screen a few time. Yes I clapped, AND when the trailer was over and my screen went dark I saw my scrawny little nerd O-Face starring back at me. So good! Everything about this works for me including the design and scale of the monsters, all the little spinning and blinking details of the huge robots, the tone, the actors, the quotes! This is going to be a true summer blockbuster and I will count the days, NAY the seconds, until this film id released in a glorious IMAX theater. I’m going to go watch that a few more times.

“We are cancelling the apocalypse!”