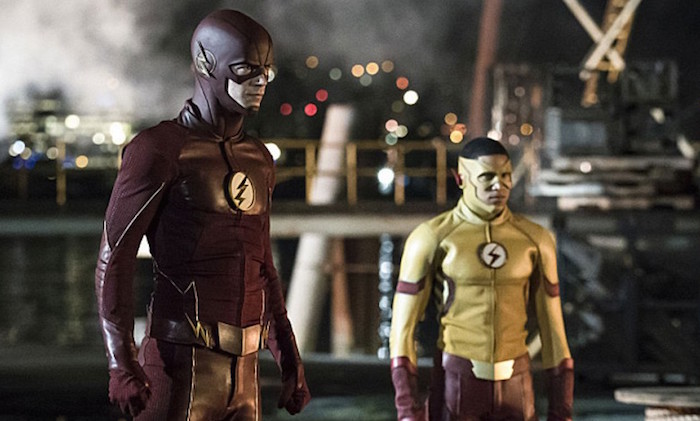 The Flash / The CW

What the shit, Barry?

How can I both love and hate time travel at the same time. It’s quite the paradox.  Listen.  I’m not proud of that joke either.   When done right, a story about time travel can present a very fascinating look into the significance our ordinary decisions can have on the world. “Biff!  You’ll break his arm!” Time travel can also lead to lazy story telling.  When every horrible thing that happens can just be undone with one quick trip into the past, nothing matters. There has to be rules. There has to be something that keeps our characters in check. “You can’t go back in your own timeline.” “Certain events are “fixed points.” “Evil leapers.” The problem with the FLASH is that traveling through time had become this ever present option that just hangs over every episode like that towel you had in college that you never washed.  While Barry knows that the universe has a way of course correcting to make sure certain events happen regardless, we never really got the impression that going back in time went against his code.  That is, until Flashpoint. I assume. Right?

Season 2 of the FLASH ended with Barry deciding to go back in time and preventing the murder of his mother. Ugh. It left us all wondering how this decision would effect the CW universe as a whole. We were also curious as to how long this alternate timeline would last.  The answers ended up being “we still don’t know” and “only one episode.” Is that disappointing?  At first, I thought it was. I spent the entire summer wondering how Barry’s decision would completely rewrite the entire DCU. As the season premiere ended, I felt like I had been slightly ripped off. Have you ever seen one of those movies where an event from someone’s past is changed to a more favorable outcome and they end up getting everything (they thought) they always wanted? Then, they spend the whole movie trying to get back all the things they had in their original life.  That whole thing. That’s how season 3 of the FLASH starts off.  Wally West is the Flash and Barry can retire. He doesn’t.  Joe is a drunk and a terrible cop, so Barry tries to make him the Joe that he knew. He can’t. Cisco is rich, just like he always predicted he would be.  Barry tries to make him a better person.  He really can’t.  Caitlin is not living up to her full potential.  Iris has lived a life of emptiness. Everything sucks and the only way to make it not suck is to let Thawne go back and kill his mother. In fact, Barry has to actually say to his mortal enemy “I need you to go back and kill my mother.” That’s ruff stuff.  This ‘Flashpoint timeline” is not the story though. It never was going to be the story.  Season 3 is not going to be a brave new world that Barry has created for himself. We’re not going to see Metropolis magically appear on their map. No. The real story is the shattered life that he is now forced to live in, all because he couldn’t leave well enough alone. The ripples of consequence streaming from this action are far too complicated to fix. There’s not enough speed force in the universe to put right all that he has put wrong. He’s those two workers in the movies carrying the plate glass window across the street during a car chase.  He’s shit out of luck.

Seeing this new dumpster fire of a world that Barry has created is going to be so hard to watch. A place where he is the only one who can remember a better world. A world that was ripped away all because he was selfish. A world where he will be forced to watch how his decision has destroyed the lives of all the people he cares about. Thawne is back in the mix. A new villain seems to be on the rise. Plus, his mother is still dead. YOU GET NOTHING! The one positive of this is that it seems that Barry has finally moved on from the death of his parents. (Which is weird because his dad died like, 12 minutes ago?)  Which puts him one skill point higher than Batman. Still… it makes you think… “Who’s the villain now, Barry?”