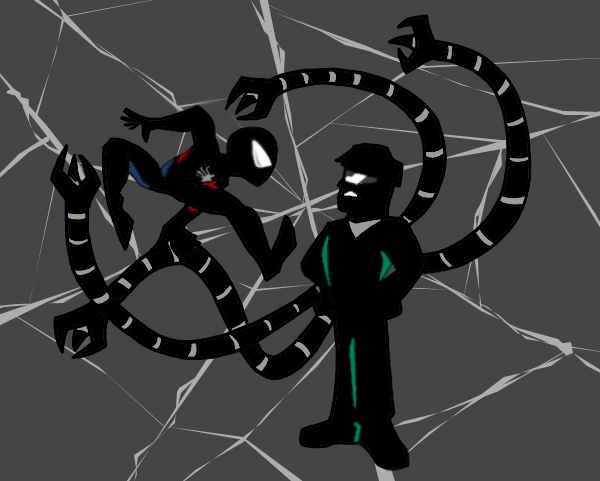 WARNING: The following review and featured video contain major spoilers for those of you who have not read THE AMAZING SPIDER-MAN #700. Read on at your own risk web heads.

When it comes to THE AMAZING SPIDER-MAN comic book series,  I will admit that I am somewhat of a fair-weather fan. Sure I followed the comic in the 90’s when I was younger and collected all the foil and hologram covers, but I rarely stuck with the series to consider myself a huge fan. This does not mean that I don’t love the character because I do. Being more of an X-MEN fan when it comes to comic books (I could only afford so much with my allowance!), I always enjoyed it when the old web-slinger teamed up for an adventure or two with the likes of Cyclops and Wolverine. So to be fair, I have really only read a handful of comics during the 700-issue run of THE AMAZING SPIDER-MAN that began in 1962. That said, issue #700 is out now, causing a whole lot of buzz, and my eager little nerd paws just had to get a copy to see what all the fuss was about.

THE AMAZING SPIDER-MAN #700 is written by the “love him or hate him” (comic book nerds are vicious creatures!) writer Dan Slott (THE BATMAN ADVENTURES) with pencils by Humberto Ramos, inks by Victor Olazaba, and colors by Edgar Delgado. As you open up the large sized $7.99 issue, it is evident that in a recent issue, one of Spider Man’s oldest foes, Doctor Octopus, has switched minds with our red and blue hero. Yes, Doc Ock and Peter Parker/Spider-Man have switched minds and Doc Ock’s body is almost dead with Peter Parker’s mind inside. The drama!! There is even a moment early on where Peter’s mind (inside Doc’s body) dies for a few minutes and fans get to see a version of Peter’s heaven as he revisits many of the characters that have passed on in the comics 700 issue run. This segment may seem cheesy on paper, but it is light-hearted and really sets the tone for the issue telling readers that he may be on his way out the door. What follows is a pretty interesting “beat the ticking clock” type story where Peter must find a way to get his mind back where it belongs before Doc Ock’s body expires with him in it! The stakes are high and the tension in this issue is pretty solid. I will say that a minor gripe I have, being someone who does not regularly read THE AMAZING SPIDER-MAN, is that I felt there was a lot of time spent on somewhat meaningless peripheral characters such as Spidey’s friend Carlie and the Jameson family. I understand this was to likely tie-up a lot of loose ends for long-time readers, but I just didn’t care and wanted to spend as much time with Peter and Doc Ock as possible. 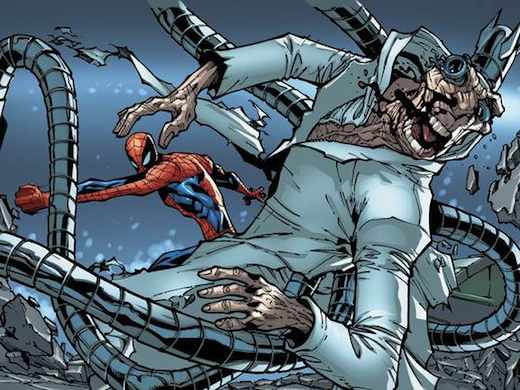 The character dynamics presented in this issue are quite interesting and really shake things up for the Spider-Man universe. Doc Ock’s body is so frail and disfigured that it looks as if he can die at any moment adding to this issues tension. Doc Ock in Spidey’s body feels a bit weird and awkward at moments for sure. For example, there is a moment when Mary Jane (Spidey’s long-time love interest) proclaims her undying love for Peter and even gives him a big smooch. I’m glad the writers didn’t take this any farther because the scenario would have ended up reading like a weird science fiction rape of sorts. I mean it’s a psychotic old man living inside the body of a younger man who has a woman swooning over him. Sure Doc Ock still has a lot of Peter’s memories, but it’s just weird. It will be interesting to see how far the writers go with this in the future. After a lot of loose ends are tied up in the story, we get a handful of pages that showcase the final battle between Spider-Man (Doc Ock) and Dock Ock (Spider-Man). This final battle is pretty epic and has both characters doing a lot of things they would not normally due because they are both desperate. In the end, even with all his intelligence and plotting, Peter Parker (in Doc Ocks body) fails and passes away into the afterlife thus ending the life of one of comics greatest and most well-loved superheroes. During the final moments of battle, and after, Doc Ock has a somewhat abrupt change of heart and decides he will become the next Spider-Man and fully commit to doing a better job than Peter Parker himself. He titles himself “The Superior Spider-Man” and stands up from the ashes of battle do continue the legacy that Peter Parker started. This was a bold move by Marvel and will surely has fans in an uproar for years to come!

While this story may not have been the ending fans have wished (or even dreamed) for, i commend Marvel for mixing things up for the Spider-Man universe and trying something new. I have to admit that I am intrigued with where the series will go from here and will likely be a regular reader for some time now just to see what happens. And let’s be honest, this is a comic book, and comic book heroes (especially at Marvel) rarely stay dead. I can think of 100 ways they could bring Peter Parker back and I’m sure Marvel has 101. So don’t fret fellow readers and just enjoy the ride!

You can check out an epilogue story of sorts with AVENGING SPIDER-MAN #15.1 and head on over to comic book stores (MISSION: COMICS & ART) tomorrow Wednesday January 9th to read the further adventures of the new Spider-Man in THE SUPERIOR SPIDER-MAN #1.

Also, be sure to check out the video below to see what contributing writer/artist Mike McG from McGTV has to say about the current state of Spider-Man is his newest segment called “Let Me Get This Straight”. It’s such a fun and awesome video. Enjoy and tell us what you think of all this in the comments below.

In the San Francisco area looking for your next SPIDER-MAN comic book fix? If so, Check out MISSION: COMICS & ART. They’ve got you covered!