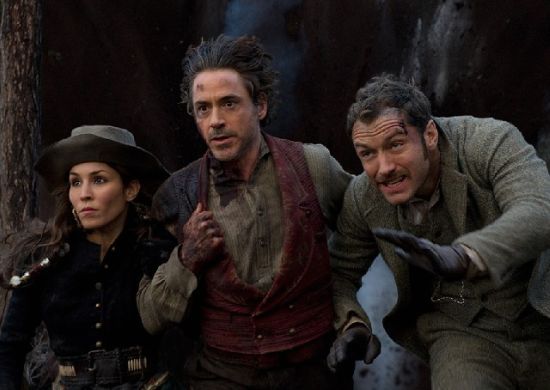 In 2009 Guy Ritchie (SNATCH) successfully rebooted the Sherlock Holmes franchise with Robert Downey Jr. (IRON MAN) as Sherlock and Jude Law (REPO MEN) as his fellow sidekick Dr. John Watson. I highly enjoyed that film and thought it gave the franchise a fresh new start. Basically, it made me a fan of Sherlock Holmes which I never was before. Fast forward 2 years and we now have the follow up film SHERLOCK HOLMES: A GAME OF SHADOWS which is once again directed by Guy Ritchie and thankfully still stars Downey and Law. This time around Sherlock is joined by his sidekick Watson to outwit and bring down their most dangerous adversary yet, Professor Moriarty. SHERLOCK HOLMES: A GAME OF SHADOWS matches the quality of the first film providing audiences with a charming and likable cast, bigger set pieces, and much more of an emphasis on fast pacing and intense action sequences.

The energy of the cast and the chemistry that they share is really what makes this film shine. Robert Downey Jr. proves once again that he is a superb leading man. He is able to blend so many elements together to create a really lovable character. At his core he is a nerd yet he has great comedic timing and the ability to double as a complete bad ass. Downey pulls this performance off yet again and I hope to see him continue on with this fun franchise. However, the chemistry he shares with Law’s Watson is really a highlight for me. Listening to these two grown men bicker like an old married couple throughout the entire film is really fun. They seem to almost hate one another but there is an unspoken bond the two share and deep down you know they are the best of friends.

At the end of 2009’s SHERLOCK HOLMES it was alluded that Professor Moriarty was pulling the strings even though we never actually saw his face. This time around he comes out of the shadows and face to face with Sherlock. Moriarty is a classic Sherlock adversary and fans have been waiting eagerly to see him make his official appearance in this reboot. Moriarty is played by Jared Harris who you may recognize from appearances on TV’s FRINGE and MAD MEN. While I am not too familiar with his work, I do believe he did a great job here as the stoic and highly intelligent lead villain. The great thing about Moriarty is that he is like an evil Sherlock Holmes. Their intellect is perfectly matched creating some truly memorable and fun showdowns. Another new addition to GAME OF SHADOWS is Noomi Rapace (THE GIRL WITH THE DRAGON TATTOO Series) as the female lead. She plays a gypsy of sorts who gets tangled up in Sherlock and Watson’s latest mystery. While she does a fine job in her role, it was nothing to write home about. She is a welcome addition but her role seemed to lack any memorable moments or quotes. She seemed to just be a pretty face who spent most of her time running and nibbling at food while Sherlock and Watson saved her ass over and over again. In any case, the cast as a whole was pretty fantastic and they all share some great chemistry together creating a fun experience.

An element of this reboot that I always enjoy, besides the overall steam punk aesthetic, is how the film explains to its audience how Holmes can be such a bad ass using his brain by slowing down and explaining some of the action. They could have just as easily made him a bad ass and just said that’s the way it is, but in these movies the director always gives time to slow things down and show us how Holmes is able to pull off all of these amazing feats. I just love that moment right before a good fight or action sequence when we get to go inside Sherlock’s head and see what he is planning. A GAME OF SHADOWS has no shortage of these moments and even has fun with them a few times creating unexpected fall outs to Sherlock’s original plan of action. Having an adversary such as Moriarty creates a level of tension in these slowed down moments because you know he can match wits and has a few trick up his own sleeve to counter attack. Fun stuff.

One last thing I want to touch upon is the pacing and overall scale of the action sequences. This is a big budget ride of a movie. The pacing moved lightening quick and there is little time to catch your breath in between the action. I also have to admit that A GAME OF SHADOWS boasts one of the most impressive action sequences I have seen in a very long time. Ever since THE MATRIX I have been obsessed with stylized slow down action sequences and A GAME OF SHADOWS delivers a handful of these. While I will not ruin my favorite scene for you, I will say that there is a 5-10 minute chase sequence that takes place in the woods that is simply jaw dropping. The style of the movie seems to change for a few minutes to make way for some truly intense and action packed chaos. It just goes to show that sometimes even Sherlock just has to run as hard and as fast as he can to get out of harms way. It was really fresh to see that even brains could not get you out of every situation. So as it stands, GAME OF SHADOWS has one of the most impressive action sequences in recent memory and is worth the price of admission alone.

In the end, SHERLOCK HOLMES: A GAME OF SHADOWS is a successful sequel that delivers a great cast, some fun set pieces, and some truly inspiring and epic action sequences. Seeing Sherlock and Watson on screen again is fun and watching Sherlock compete in a battle of the brains with professor Moriarty is really a joy to watch. While I admit there is an over saturation of reboots, remakes, and sequels in today’s film landscape, I am glad that this reboot exists because it does everything a successful reboot should do, make you a fan of something you were not previously and/or make you MORE of a fan than you already were. I am ready for a third installment and eagerly anticipate where the series goes from here.