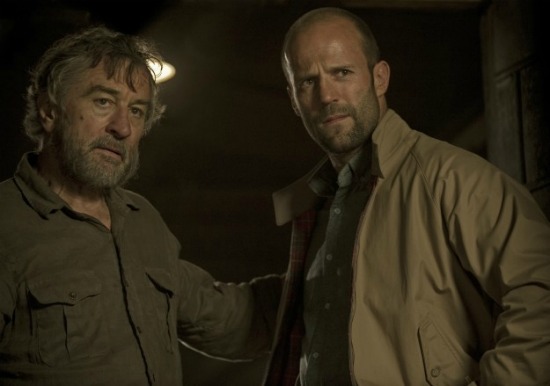 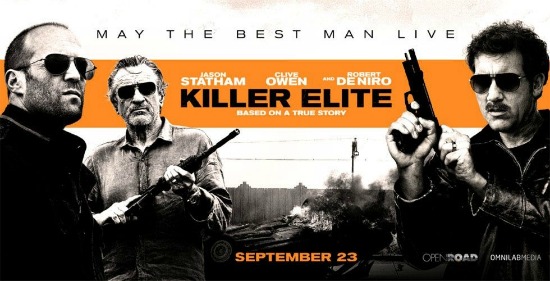 KILLER ELITE is directed by newcomer Gary McKendry and has an all-star cast that includes Jason Statham (THE EXPENDABLES), Clive Owen (SHOOT EM’ UP), and Robert De Niro (TAXI DRIVER). The plot revolves around a retired member of Britain’s Elite Special Air Service after he discovers his mentor has been kidnapped and is forced back into action. The trailer for this film teased its viewers with balls to the wall action coupled with some high energy music and editing. I have to give credit to the creators of that trailer because it got me in the door. You tricked me you ass holes.

Let’s start with the plot. Ok so two buddies (Statham and De Niro) are on a mission killing and murdering the crap out of people until Statham’s character sees a kid in a car and freezes up. Apparently he can kill hundreds of adults without flinching but when he sees that damn kid he just stops and quits his career as a hired killer. I really hate it when tough guys draw the line with kids. It’s cheesy as crap, overdone, and really makes you look like a big pussy. I’m not saying he should have shot the kid in his freckled face, but maybe just don’t shoot the kid and move on with your mission. You don’t have to freeze up and quit your bad ass job. So he retires and attempts to live a normal life until his buddy (De Niro) who is still an elite killer get kidnapped and held for ransom. So now Statham must get back in the game he vowed never to return to and free his dumb friend who got caught by an old dying man and his prissy rich son. Booooooring. 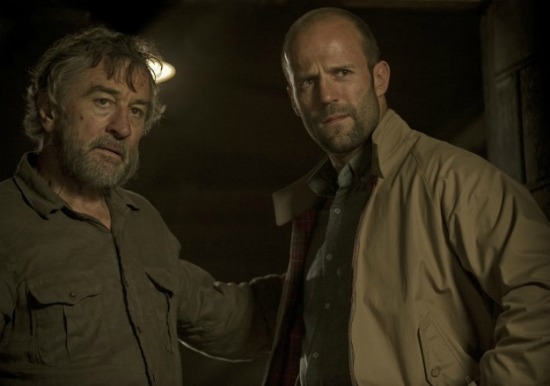 Alright so I did not just spend $14 on a movie called KILLER ELITE for the wonderful story. Part of the reason I came to this movie was because I genuinely like the cast. Sure Jason Statham was doing his best Jason Statham impression for 2 hours but ya know what, I like him so that’s ok. I think he is a bad ass and is one of the only actors today that I can compare to the glory days of Stallone and Willis. I also love watching Clive Owen in anything. SHOOT EM’ UP, SIN CITY, and CHILDREN OF MEN are great examples of why Owens kicks ass and he looked like a great character in this film. He’s rocking a sweet looking stash and lost sight in one of his eyes likely from some bad ass encounter in his bad ass killer past. In the end, his performance was just serviceable. I still love the guy. And now we come to Mr. De Niro. Unfortunately De Niro no longer gives “performances” but rather gives  only “appearances”. His role in this film was minimal and I believe he was only added to give the film some star power for the posters and trailers. De Niro needs to refresh his career and be in something amazing again. Besides the main stars I would like to mention the actor Dominic Purcell (TV’s PRISON BREAK, BLADE TRINITY) who was a show stealer. He usually gives us real “meat head” performances but I have to admit that I really dug his acting here even more so than any other big name actor in this film. I hope he gets more substantial roles after this one.

The last saving grace for this film was the action. That damn trailer prepped me for some intense action and I sure as hell did not get that. What I got instead was a mess of action sequences that were poorly edited, way too shaky, much too dark, and all together uninspiring. I seriously can not think of one “wow” or “cool” moment in the entire film. Sometimes I can deal with a bad plot or a few bland characters if the action pays off. I am capable of enjoying movies that are mostly style and no substance if the action is amazingly over the top and bad ass like in Zach Snyder’s SUCKER PUNCH. This film however has no style and no real substance. I was often bored and when an action scene finally did come around I was immediately let down by its overwhelming lack of entertainment. Whenever I see a movie with really shaky and dark action all I can think is that the director has zero confidence in his movie and the action included. 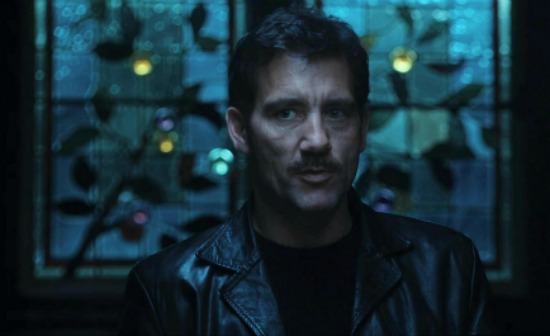 While this whole review is pretty damn negative I must say that the one thing going for this movie is that it was not offensively bad. It was just mediocre at best. I really hate ragging on action movies full of actors I love but I really had little choice with this one. It is just such a letdown and never delivers anything the trailer promises. The plot was boring, the characters and their motives were uninspired, and the action was just a mess. So while I do not hate this movie, I can not in my right mind recommend it to anyone looking for a good or even decent action flick. A few of the side characters are sometimes fun to watch and Clive Owen looks cool. If you must see this one, save your pennies and check it out as a rental down the line.