Sometimes the less you know about a movie before you see it the better. DRIVE is definitely one of those movies. While I will do my best to avoid any major spoilers, I urge you to save this review for later and just go see this movie. That said, on with the review!

DRIVE is directed by Nicolas Winding Refn (The PUSHER Trilogy, BRONSON) and stars Ryan Gosling (THE NOTEBOOK, STAY) in his best performance to date. DRIVE tells the tale of a Hollywood stunt car driver (Gosling) who moonlights as a Wheelman and soon discovers that there is a hit put on his life after a heist he was involved with goes terribly wrong. The story here is not what makes DRIVE such a success. What makes DRIVE a complete success is the films overall pacing and execution complimented by an amazing cast, a perfect mixture of beauty and violence, and a truly amazing soundtrack. Besides all those wonderful elements, DRIVE is simply one of the “coolest” films I have ever seen.

As I mentioned above, Ryan Gosling is on fire in DRIVE. This is such a fantastic role for Gosling and his character, simply known as “Driver”, is so perfectly stoic and mysterious that he borders on awkward. The one thing that is known for sure is that this character is most definitely cool and capable of extreme violence AND intimate affection. Carey Mulligan (NEVER LET ME GO) also does a fine job as Irene who plays the cute girl next door in which Driver becomes infatuated with. The chemistry between Gosling and Mulligan is subtle and most definitely feels real. There is a nice balance here that consists of tender moments of affection crossed with awkward moments of hesitation. 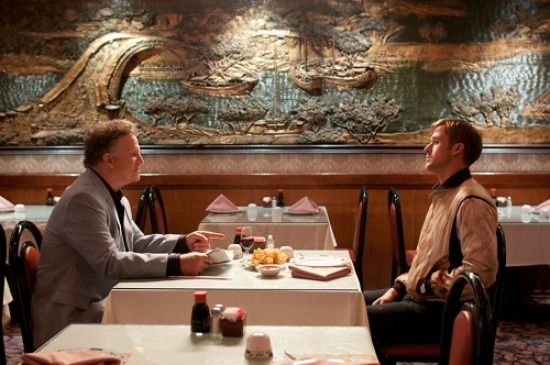 Besides the amazing leads mentioned above, the supporting characters here ALL shine in their respective roles. Albert Brooks (TAXI DRIVER) gives his best performance to date as the intensely menacing villain Bernie Rose, Ron Perlman (HELLBOY) does what he does best as the sleazy and ruthless Nino, and Bryan Cranston (BREAKING BAD) does a fine job as Driver’s old pal and former stunt car driver Shannon. There are a handful of other supporting characters that all do a wonderful job creating one of the best ensembles I have ever seen in a film. Good stuff.

While the cast and characters are all superb, what really makes this film work is the director’s ability to create a pacing and tone that is not afraid to take any risks. Refn often embraces important moments and stays with the characters during intense periods of intimacy, awkwardness, violence, and stress for extended amounts of time. This is most evident with the relationship between Driver and Irene AND an initial Wheelman job that keeps the audience with Driver the entire time. DRIVE often stays in a moment to clarify its beauty which only makes the scenes of abrupt and intense violence that more meaningful. It must also be noted that these moments, and the entire film for that matter, are all extremely aided by a wonderful synth-pop soundtrack scored by Cliff Martinez that is arguably the best soundtrack for a movie in years right next to what the Chemical Brothers did for the movie HANNA earlier this year. 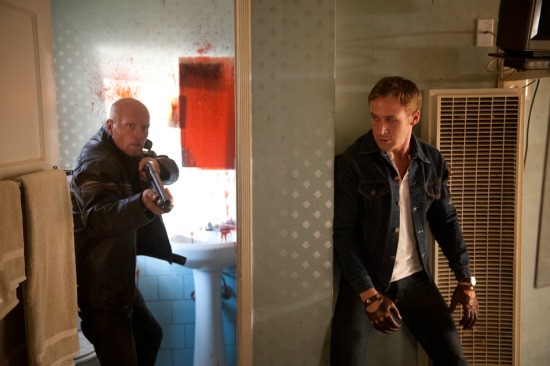 The action and violence in DRIVE is something that took me a bit by surprise. Never did I think that I would witness such intense and visceral scenes of violence in this film. I admit I am extremely desensitized when it comes to violence in films and TV because I think I have seen it all. Let me tell you that some of the scenes in this movie had me cringing and dropping my jaw like never before. This is some serious stuff people. And to tell you the truth, I do not think it’s much worse on paper than what we see in most movies today. The reason I believe the violence works so well is due to it’s juxtaposition to such beauty. The violence here is almost always thrown at you after and extremely intimate or therapeutic moment of beauty. Brilliant! Also, I invested so much into the characters here that I genuinely did not want to see any harm come to them. The first thing any action movie should get right is to actually care about the characters. Come to think of it, you could easily compare Goslings Driver to Jason Statham’s character in THE TRANSPORTER (which I also love by the way). They both pretty much do the same thing yet I am 100 times more fond of Gosling’s Driver because the film made me care about him as a person rather than just a grunting bad ass. That said, the action here is sweet, the violence is visceral, and the car chases are all very real and intense. Fun stuff.

In the end DRIVE is a smashing success and will easily rank in my top movies of the year right next to HANNA, X-MEN: FIRST CLASS and SUPER 8. DRIVE is a beautiful and violent movie that grabbed me from the beginning and never let me go. The cast is just perfect and Gosling’s Driver is one of my favorite movie characters in years. The pacing and execution in this film is marvelous, the action and violence is jaw dropping, the soundtrack is perfect, and the overall sense of satisfaction is almost overwhelming. DRIVE is a must watch movie. Simply beautiful and cool.