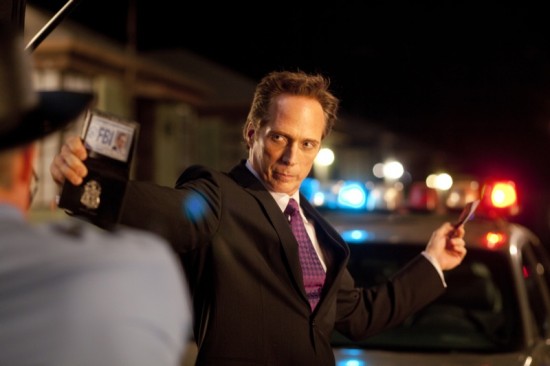 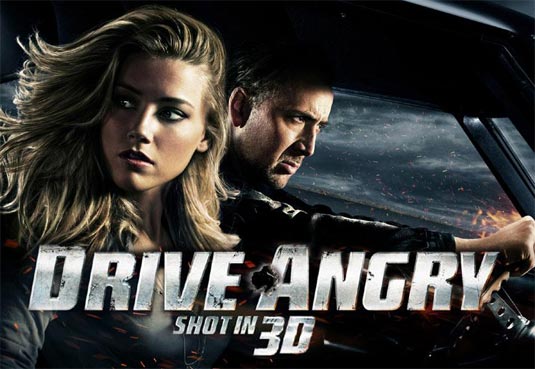 The latest Nicolas Cage (RAISING ARIZONA, KICK-ASS) movie to speed into theaters is the Patrick Lussier (MY BLOODY VALENTINE, DRACULA 2000) directed thrill-ride DRIVE ANGRY 3D. The film Stars Cage as a vengeful father named Milton who busts out of hell in order to find and kill all the people responsible for murdering his daughter and kidnapping his baby granddaughter. This film is intended to be a non-stop action movie full of crazy characters, insane action scenes, and cheesy dialogue all in eye-popping 3D for added fun. While some of those goals are met in this film, the overall experience is a bit lacking and I feel as if the “crazy-meter” could have been turned up a notch or two. I mean if you are aiming to make a movie that is not to be taken seriously you may as well go all out. While it may feel lacking in some departments there is enough here to keep viewers happy and have a good time at the movies with some friends and a big ass bag of popped corn!

Let me begin by saying I loathe the 3D trend in Hollywood these days and it takes a whole lot for me to actually get excited to see a movie in 3D. Let’s just say a “hard R” rated movie about a vengeful father breaking out of hell to kick some ass starring Nic Cage IS that movie for me so I paid up the 15 bucks to see this one. Also, this movie does NOT just add the 3D effect in the editing room it actually was shot in full 3d using a stereoscopic 3d camera much like the one used for James Cameron’s AVATAR. The use of real 3D was something I valued and it got me in the door. While a few of the 3D effects were cool, there really just isn’t anything here that makes me think it was necessary at all. It’s just is not worth the headache I get from watching dimly lit action scenes that pop out of the screen a bit. If AVATAR did not sell me on 3D I really don’t think anything will to be honest. 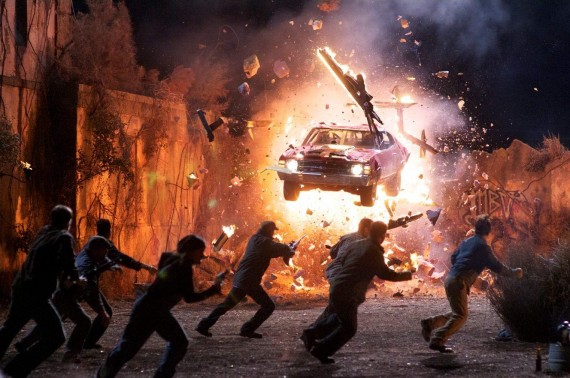 The story here is basic mindless fodder and it strives to be nothing more. We get a quick and dirty setup about some bad ass who escapes hell to avenge his family who also drives a bad ass car, has some bad ass weapons, and has a real “who gives a shit” attitude about everything but his family. This story is obviously predictable as hell (pun?) and there really are no big surprises to be had. The real fun in a movie like this is the awesomely corny characters and over-the-top action. That is what we paid for, and that is more or less what we get.

I am a HUGE fan of Nic Cage’s work and he is in top form as the eccentric with something to lose we usually see him as. We are introduced to this wild man early on and his eccentric nature is showcased right off the bat. However, during the middle portion of this movie we don’t see Cage do much of anything that is as bat-shit crazy as his introduction until the films later half. We have all seen Cage go nuts (in a good way) for 2 hours straight in movies such as FACE-OFF, CON AIR, and the more recent BAD LIEUTENANT: PORT OF CALL NEW ORLEANS and I love him all the more for it, but we just seem to only get that in the beginning and end of this film. This type of movie seems to be the perfect fit for Cage and lends itself to actors letting go and just having fun with their characters. While Cage definitely did this, I am a bit saddened that we didn’t get to see him go nuts as much as he could have with this one. Maybe I just wanted MORE Cage in this film because I love his screen presence so much. To his defense, he did have a few astounding moments that are memorable.

Luckily for us, the rest of the cast fills in for Cage when he is not on screen dishing out the crazy we expect from him. It is most evident that the rest of this cast had a blast playing their characters and really gave it their all with some truly bizarre and wacky characters. When Milton (Cage) busts out of hell he is followed by a man only referred to as “The Accountant” played perfectly by William Fichtner (PRISON BREAK, BLACK HAWK DOWN). “The Accountant” is in pursuit of Milton to bring his ass back to hell and will stop at nothing to do so. This role is the definition of a show-stealer! Everything from this characters dialogue, line delivery, posture, energy and over all bad ass nature is spot on! I have always been a fan of Fichtner’s work and this is one of his best roles yet. This movie is worth seeing for his scenes alone and I found myself being carried though this movie by the anticipation of his next move. I won’t spoil a thing, but I must say that his character rocks and makes this movie better for sure. The other actors include the attractive Amber Heard as Piper (PINEAPPLE EXPRESS, NEVER BACK DOWN) who is the female lead along for the ride and we also have Billy Burke (TWILIGHT SERIES, FRACTURE) as the stories main human villain/ass hole who does everything in his power to prevent Milton from rescuing his granddaughter. Both play their roles with high energy and deliver fun and cheesy performances that entertain throughout. 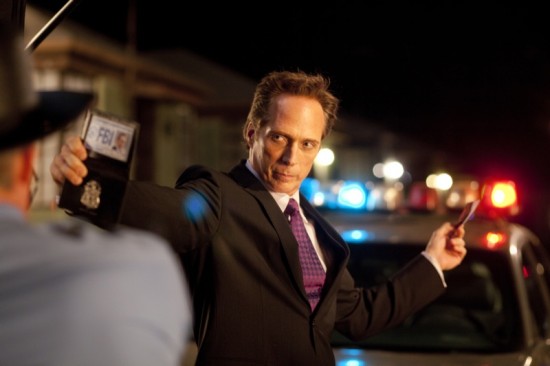 The action in this one is fast paced and fun for the most part. There are one or two moments that stand out above the rest that feature Fichtner’s “The Accountant” character. Besides those, Cage does have a few shining bad ass moments that are worth seeing on the big screen. I just don’t think there were enough risks taken in the action department and it would have been nice to see some more creative deaths and kills. The action is better than a lot of what we have seen lately, but just never reaches the point of awesomeness I expected. The 3D effects during the action never really impressed or heightened the experience and I am actually curious to see how this movie looks in 2D.

I give this movie credit for being bold enough to deliver a wild ride full of cool action scenes, a fun story, and some truly memorable characters all in violent real 3D. In the end, I had fun with this one and did not think I wasted my money at all. It was a blast to see in the theatres and I am always up for a new Cage feature.